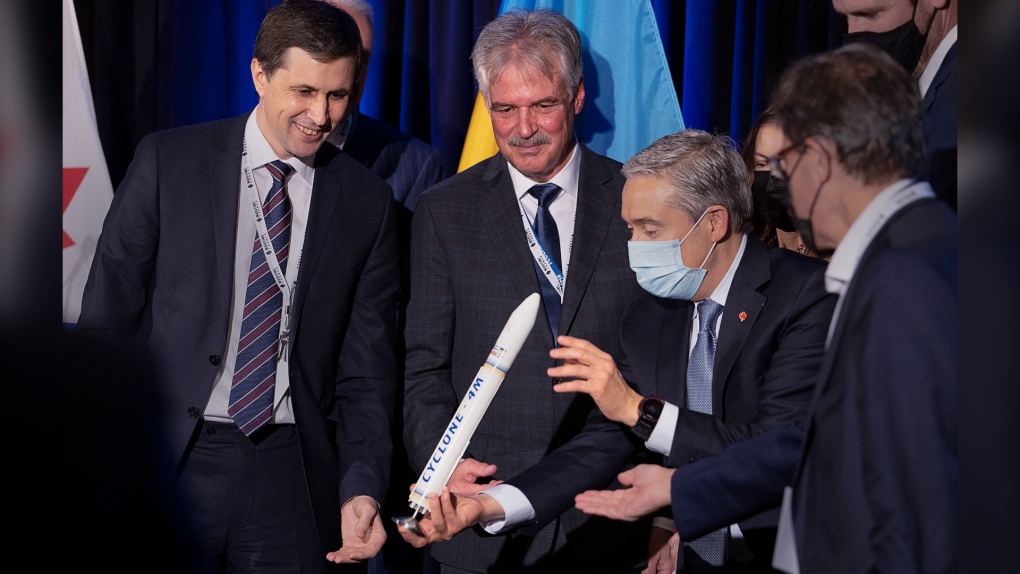 The company behind the push to build Canada's first commercial spaceport, to be located on the tip of northeastern Nova Scotia, announced on Friday the first payload client for its initial rocket launch, which it expects near the end of 2023.

Stephen Matier, president and CEO of Maritime Launch Services, told reporters in Halifax that Nanoracks, a leading commercial payload provider to the International Space Station, will use the spaceport to deploy small satellites for its customers.

Texas-based Nanoracks, which also offers satellite services to the Canadian Space Agency, is known for having designed and built the oven for baking cookies that was shipped to the space station in 2019.

Matier said the launch agreement with Nanoracks is worth US$45 million, adding that the business case for getting the spaceport built is increasingly evident.

"The commercial space industry is already at $400 billion a year and growing," he said. "The backbone of that industry though, is the ability to launch those satellites into orbit."

Nanoracks co-founder Jeffrey Manber said his company's confidence in the proposed venture is a sign that the idea of building a launch centre on Canada's East Coast is realistic. The proposed site was picked because of its remoteness and its access to a desired due south trajectory to put satellites into orbit.

"It's extremely important to have a variety of spaceports," Manber said in an interview Friday. "Being so close to the United States, it will be easy to ship your satellites, so there are a lot of advantages for our customers once Maritime Launch gets going."

Matier also announced that his company had signed a letter of intent to launch small satellites for Nova Scotia-based GALAXIA Mission Systems. As well, he revealed preliminary designs for a launch control centre to be built at the spaceport site near Canso, N.S., complete with a visitor and educational centre.

Matier said the first payload will be launched aboard a Ukrainian-built Cyclone-4M rocket. He said the rocket, which has 877 successful missions to its credit, offers a lift capacity of five tonnes with a payload bay four metres in diameter, capable of carrying dozens of satellites at a time.

Taftai called the Maritime Launch project the next chapter in the relationship between Ukraine and Canada. "This is a project which will combine a perfect launch site, a perfect location and an excellent rocket," he said.

In May, Maritime Launch Services announced it had secured $10.5 million from Toronto investment bank PowerOne Capital Markets in order to help it achieve its first flight. It also announced some of the firms chosen to design and construct the launch pad, including Stantec, Strum Consulting, Nova Construction and St. Francis Xavier University. Maritime Launch Services has said it was aiming to have the project ready by the end of 2023.

Last March, Nova Scotia's Environment Department granted the company an 18-month extension to begin the project's construction. The department said it expected all conditions of the environmental assessment approval to be completed no later than Dec. 3, 2022.

Matier said the work on satisfying the province's requirements continues, as does pre-construction activities, including design work for the entire facility and work to find potential customers.

"We are having positive conversations with other satellite developers," he said.

This report by The Canadian Press was first published Nov. 19, 2021.

Saanich police will hold another update on a deadly shooting that took place on Tuesday afternoon, leaving two suspects dead and six officers with gunshot wounds.

The Royal Canadian Navy says it has relieved the commanding officer of a warship in the Pacific Fleet.

Here's what Air Canada and WestJet have said about reducing flights

Two of Canada's largest airlines announced steps this week to cope with delays, cancellations and service issues. Head to CTVNews.ca to read about the changes announced by Air Canada and WestJet.

Conservative leadership candidate Pierre Poilievre joined the final leg of a march led by a Canadian soldier charged for speaking out against COVID-19 vaccine requirements that has sparked promises -- and fears -- of a new wave of protests in the capital.

Ottawa protest organizer Tamara Lich will spend at least five more nights in custody in Ottawa after she was arrested in Alberta for allegedly breaching bail conditions.

The Conservative Party of Canada says approximately 675,000 members will be eligible to vote in this year's leadership race.