HALIFAX -- The RCMP has released more information about the investigation into a killing spree that claimed the lives of 22 Nova Scotians during a two-day rampage last month.

The massive operation -- named H-Strong -- involves specialized officers and resources from across Canada as police investigate the killing spree, which took place over April 18 and April 19 in several Nova Scotia communities.

The 51-year-old gunman was eventually shot and killed by police at a gas station in Enfield, N.S., on April 19, roughly 13 hours after his rampage began.

Police say there are many aspects to the investigation, including analyzing the killer’s movements, possible motivation for the crimes, and whether he received assistance leading up to the killing spree.

Psychological autopsy will be conducted

The RCMP says its behavioural analysis unit is conducting a psychological autopsy of Gabriel Wortman, with the goal of gaining insight as to why he committed one of the worst mass killings in Canada’s history.

Police say the autopsy will include an analysis of the killer’s personality, past behaviour, and how he related to others.

Dr. Scott Theriault, the deputy head and clinical director of the Nova Scotia Health Authority’s psychiatry department, says the autopsy will also include talking to people who knew the shooter.

“They might want to look at even younger years, and interviewing people that knew him when he was younger to explore whether or not he had some sort of trauma or something like that, or some sort of experience that happened to him as a child that may have shaped his behaviour over time,” explained Theriault.

He said investigators will also likely focus on the gunman’s relationships with women.

The shooter began his attack by handcuffing and assaulting his girlfriend before she escaped and hid in the woods. She was badly beaten, but survived the assault. 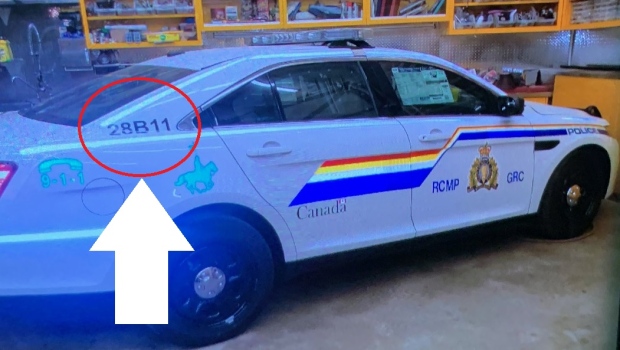 The RCMP said the shooter was driving a vehicle that appeared to be an RCMP cruiser. (Nova Scotia RCMP)

During the rampage, the gunman was disguised as an RCMP officer and drove a mock police cruiser.

Investigators say they have identified the supplier that was used to make the RCMP decals on Wortman’s replica patrol car, and that the decals were created without the business owner’s permission.

Police say both the business owner and the individual who made the decals are cooperating with investigators.

Police have not released the name of the business.

Some guns believed to have come from U.S.

One gun has been traced to Canada. Investigators believe the other three weapons were obtained in the United States and they are working with the Canada Border Services Agency.

“The calibre of the weapons is not being released, because determining where and how the gunman obtained the firearms is a central part of the investigation, and we use this detailed information to verify the credibility of some of the information we receive,” said the RCMP in the news release.

Chris Lewis, a public safety analyst, says while the killer won’t be facing a criminal trial, there could still be a trial related to how he acquired the weapons.

“I suspect there’s still ongoing investigation around how he acquired those weapons and from where, that could result in a trial,” said Lewis. “So, in the meantime, they’re trying to protect the integrity of that investigation and any potential court process in the future.” 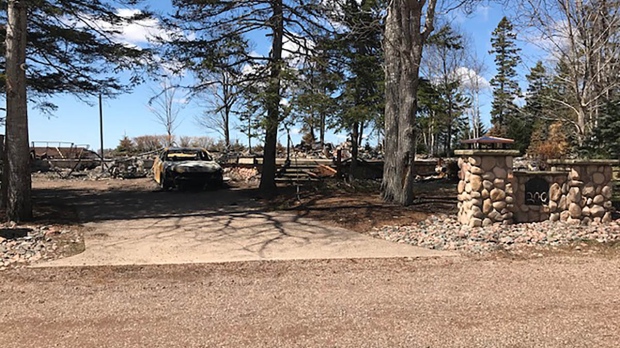 The RCMP say a special tactical operations team has completed ground searches of 17 scenes related to the investigation and all 17 scenes have now been released.

Among the scenes was the gunman’s property in Portapique. Police say forensic identification officers, with support from Dalhousie University, used ground-penetrating radar to search under his property.

“This was done to determine whether anything of relevance or interest to the investigation was buried on the property, and nothing was recovered,” said the RCMP.

Wortman’s home was among several residences he set on fire in Portapique during the rampage.

Investigators believe he used an accelerant and they now know, based on statements from witnesses, that he had a “significant supply of gasoline” at his Portapique home. 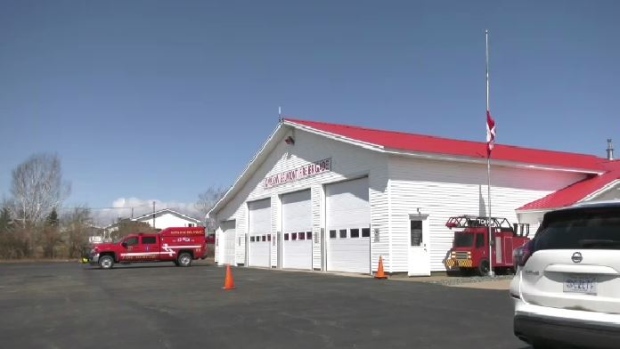 SIRT is investigating after shots were fired at the fire hall in Lower Onslow, N.S., pictured here.

Three matters have been referred to Nova Scotia’s Serious Incident Response Team, which investigates all serious incidents involving police in the province.

SIRT is investigating two of the incidents, including why gunshots were fired at the fire hall in Lower Onslow, N.S., the morning on April 19.

SIRT previously confirmed that two RCMP officers opened fire outside the hall, which was being used as a registration centre for Portapique residents who had fled their homes after the rampage began.

Sources have told CTV News the two RCMP officers who opened fire outside the hall Sunday morning thought they were shooting at the suspect, but stopped when they learned it was a fellow RCMP officer.

An RCMP officer had been stationed outside the fire hall that day.

SIRT is also investigating the death of the gunman.

The third matter, which police say is related to whether RCMP Const. Heidi Stevenson fired her weapon at the gunman, remains part of Operation H-Strong.

Stevenson, 48, was killed during a confrontation with the shooter the morning of April 19.

Police interview 500 witnesses, seek those who had conflict with killer

Investigators have spoken to 500 witnesses and continue to conduct interviews.

They are asking to speak with anyone who may have had a conflict with the gunman, whether professional or personal, at any time.