Residents in Antigonish, N.S. asked to stay home, some evacuated by boat amid heavy rain

A slow moving storm system has led to flooding in several parts of the Maritimes.

In Antigonish, N.S., some residents had to be evacuated by boat amid rising water levels in the town.

"They pulled up to the door and I got in and I got my bags and floated down,” said Dave Fuller, who was evacuated from his home. “There was another older lady down there walking in the water and they had to rescue her."

In a news release from the Canadian Red Cross Tuesday night, it says about 70 people were evacuated or asked to shelter-in-place Tuesday after heavy rain led to flash flooding around a park on Maclellen Street that contains about 40 mobile homes.

Following a request from the Town of Antigonish, Red Cross volunteers arranged emergency lodging and meals in area hotels for 33 people evacuated from the Indian Garden trailer park.

"Those 33, and 36 others who either remained in their homes or went to stay with relatives or friends, may receive additional once flooding recedes and it's safe to assess damage and additional emergency needs," read a release from the Canadian Red Cross.

"The RCMP initiated the evacuation of Indian Gardens Trailer Court,” said Kate Gorman, marketing and communications officer with the Town of Antigonish. “The Red Cross will be managing the shelter accommodations for these residents and Antigonish County Rescue is on site supporting the evacuation activities."

More than 100 millimeters of rain fell in the Antigonish area in the last 24-hours, leading to some flooded streets in the town and county.

"Antigonish is experiencing a significant amount of flooding in a few areas in town,” said Gorman. “Right now, our main areas of concern are Main Street, from about the Maritime Inn to St. Andrew's Street. We're keeping an eye on the route access to the hospital in the area. Columbus Field has also experienced significant flooding." 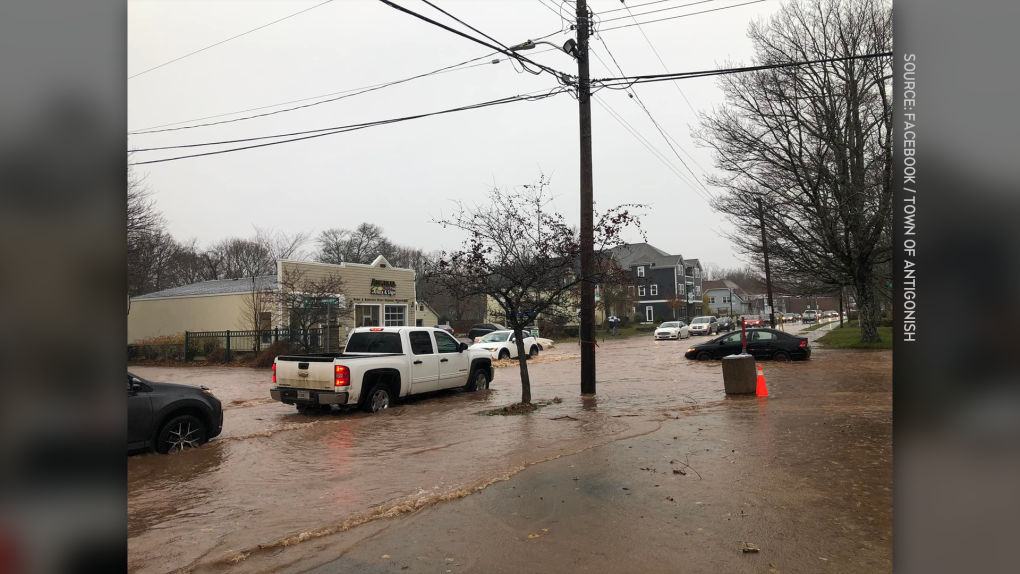 The flooding has shocked some residents of the town.

"I've been in town for the better part of 16 years and I've never seen anything like this,” said resident Mike Hart. "I don't think anyone was really expecting the weather that we got. I mean, we knew there was rain coming but nothing like this."

The rain also caused part of Highway 245 to wash out.

"It looks like the culvert breached,” said Warden Owen McCarron. “Too much water overtook the culvert and just started to erode the road and then the total collapse and the underside of the road went first and then the asphalt collapsed in. So, just fortunate no vehicles travelling over it at that time."

The washout left some students at the H.M. MacDonald Elementary School in Maryvale, N.S. temporarily stuck at school.

Officials are asking residents in the Antigonish area to stay home if they can.

“Please stay off the roads. Conditions are changing quickly, the water levels are rising quickly and it's hard to determine where flood spots are going to be so, we want to make sure that people are safe and allowing first responders to do what they can,” said Gorman.

"Make sure you check on your neighbour,” said McCarron. “It's good just to do a check in with a neighbour to make sure everything’s ok. Someone might have some water in their basement, if you can help out, we ask you to do that."