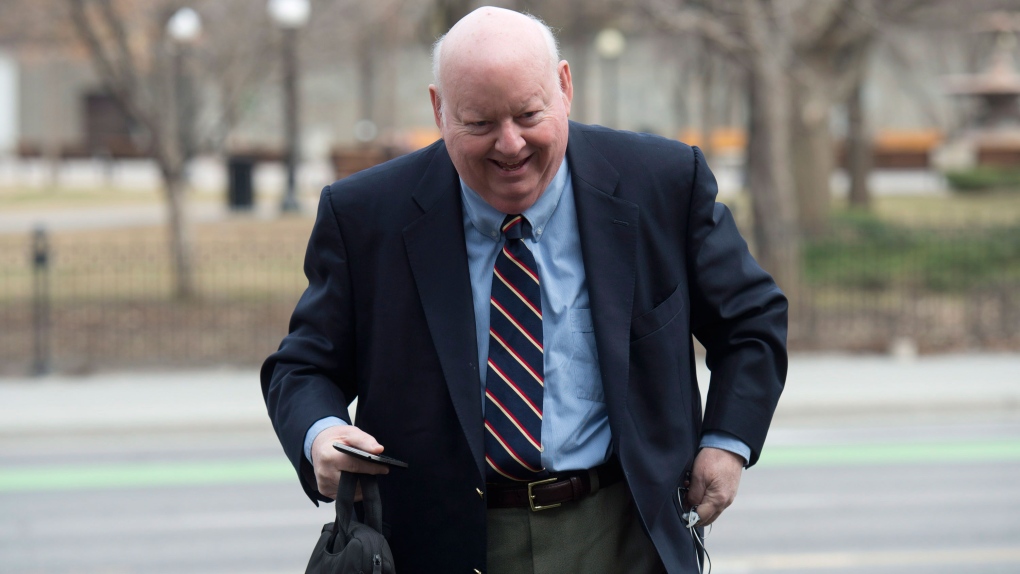 Suspended Senator Mike Duffy arrives at the courthouse for his trial in Ottawa, Friday, April 17, 2015. (Adrian Wyld / THE CANADIAN PRESS)

OTTAWA -- The Senate is attempting to block the release of a politically sensitive audit it quietly conducted into the residency status of all senators, the Mike Duffy trial heard Monday.

The audit was commissioned some time in late 2012 or early 2013, when the Senate expense scandal first began to unfold.

Duffy's lawyer Donald Bayne and Crown prosecutor Mark Holmes briefly discussed the fact that a lawyer for the Senate is claiming parliamentary privilege to keep the audit from becoming public.

Bayne will have to decide whether it's worth the effort to fight for the document, possibly in a separate legal proceeding in Ontario Superior Court.

Neither Bayne nor the Crown have seen the audit, but it was referred to during a 2013 police interview with Gary O'Brien, who was then clerk of the Senate.

"Before Christmas 2012, the internal economy committee requested that senators provide four specific documents to support their residency locations," reads the report of the interview.

"Using those indicators, an internal audit would be done by (administrator) Jill Anne Joseph, on all senators."

In February 2013, the committee put out a brief report saying that only two additional senators initially raised flags during the audit -- Liberal Sen. Rod Zimmer and Conservative Sen. Dennis Patterson.

"Both explained to the complete satisfaction of the interviewers that their travel claims were in order," the report said.

Duffy, along with Senators Patrick Brazeau, Mac Harb and Pamela Wallin had already had their expense claims referred to outside auditors at that point.

Senate spokesperson Nancy Durning said Monday she could not discuss a matter that is before the courts.

In this fourth week of Duffy's trial on fraud, breach of trust and bribery charges, the focus has looped back to Duffy's declaration of his Ottawa-area home as his secondary residence, enabling him to collect $90,000 in living expenses over four years.

Bayne repeatedly made reference to Conservative Sen. Carolyn Stewart Olsen. After her appointment in 2009, she, too, filed expense claims for an Ottawa home she already lived in.

Duffy found himself charged with fraud and breach of trust, while Stewart Olsen's expenses never seemed to raise an eyebrow inside the Senate.

As an added wrinkle, Stewart Olsen sat on the secretive Senate committee that reviewed Duffy's expenses and collaborated with the Prime Minister's Office on altering its final report in 2013. She was a former senior aide to Stephen Harper.

Duffy and Stewart Olsen were well-established figures in Ottawa before they were appointed by Harper to represent Prince Edward Island and New Brunswick, respectively.

"All I can say is if senators provided a form and said their primary residence was more than 100 km 1/8away 3/8 and they incurred additional living expenses while in the 1/8national capital region 3/8 and they had the proper documentation, then finance would have provided the budget," Proulx responded.

When the Senate expense scandal was unfolding in 2013, Stewart Olsen told The Canadian Press in an interview that she had always planned on living in New Brunswick, but she couldn't immediately sell the home in Ottawa.

Duffy also had work to complete on a cottage in Cavendish, P.E.I., where he says he spent $100,000 in upgrades over the years.

Internal emails filed in court show that Stewart Olsen worked closely with officials from the PMO in early 2013 to delete any overly negative assessments of Duffy's living expenses from a committee report.

"Hi Nigel, just a quick note to say that I am always ready to do exactly what is asked but it would have been a great help to know in advance what the strategy was," she wrote to Harper's then-chief of staff Nigel Wright in early 2013, as they discussed Duffy's situation

The investigating committee received a report from audit firm Deloitte that said it could not draw any conclusions about Duffy's living expenses, because the Senate didn't provide any criteria for primary or secondary residences.

Proulx said in court Monday she agreed with Deloitte's assessment.