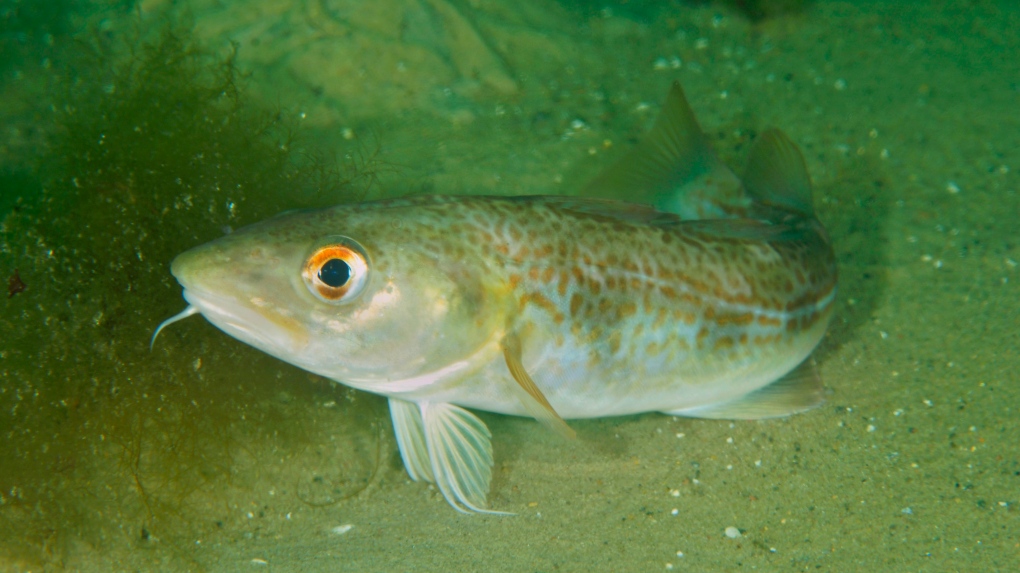 A new study says a patient approach to rebuilding Newfoundland and Labrador's precious northern cod stock could see the fishery's economic activity and employment potential skyrocket in the next 11 years. (THE CANADIAN PRESS/HO - Oceana, Carlos Minguell)

ST. JOHN'S, N.L. -- A slow and steady approach to rebuilding the northern cod stock could see employment in the crucial fishery skyrocket in just over a decade, according to a new study.

The report was released Thursday by advocacy group Oceana Canada as one of six case studies assessed by University of British Columbia fisheries economists in a larger report considering the social and economic benefits of rebuilding Canada's fisheries.

The economists project that within 11 years, under favourable environmental conditions and low fishing pressure, a rebuilt northern cod fishery could support 26,000 jobs -- 16 times more than today. Economic activity generated by the fishery could reach $233 million, up from its current level of $33 million.

"Our results suggest that bearing this short-term cost can lead to economic benefits, which in the long term are an improvement over maintaining the status quo," the full report reads.

The study spoke to the northern cod's status as an "iconic species" of huge importance to the coastal communities of northeastern Newfoundland and Labrador.

"It (northern cod) stands as a symbol of the bounty and prosperity that supported massive fisheries .... It also is a symbol of loss and the devastating consequences of overfishing," the study read.

"Signs of a fragile recovery of northern cod bring hope, and with it, opportunities to (correct) the wrongs of the past."

Researchers ran several scenarios, but even under the poorest environmental conditions, the study projected the value of northern cod, if allowed to rebuild to a healthy status with low fishing pressure, would exceed its value under current practices.

The northern cod projections were set against a "status quo" catch. The status quo was defined as 13,000 tonnes of fish landed annually while a low fishing catch was defined as 9,500 annual tonnes.

The commercial cod fishery, once the backbone of Newfoundland and Labrador's fishing industry, collapsed and was placed under a moratorium in 1992, throwing thousands out of work and sparking protests.

Federal fisheries officials reported this year that the stock has made significant gains over the last few years but warned that it is still in a critical zone.

Oceana Canada's projections are consistent with advice given by the federal Department of Fisheries and Oceans when it released its annual report last month. DFO advised keeping cod removal at the "lowest possible levels" until population numbers clear the critical zone.

The Fish, Food and Allied Workers Union responded to DFO's latest report by advocating for "modest increases in harvest rates" and arguing these increases would not significantly impact the stock's growth.

Federal Fisheries Minister Jonathan Wilkinson said in a statement Friday that protecting Canada's oceans, and the jobs that depend on them, is a "top priority" for the federal government.

He said Bill C-68, still before the Senate, is a key part of the plan. The bill would amend the Fisheries Act and introduce stronger commitments to implementing rebuilding plans for depleted fish stocks.

Oceana Canada's science director Robert Rangeley said in an interview that northern cod was chosen as a case study because it has great potential. "It's been showing ... some evidence of kind of a fragile recovery. It's going in the right direction," Rangeley said.

"Should we be patient, or should we be rushing in and fishing it now? I think this adds little bit more evidence that a patient approach will reap benefits in the future."

Rangeley said rebuilding plans are a key but often missing piece to restoring the healthy status of Canadian stocks.

The cod study noted that just five of Canada's fish stocks assessed as "critically depleted" have rebuilding plans in place, and not all of these follow global best practices.

Rangeley said these plans should keep the needs of coastal communities in mind, but he said the biggest payoff will come if the stocks are able to rebuild to a healthy level because of reduced fishing pressure.

"We still have to rebuild these stocks, and that's where the value is going to come. That's the investment," Rangeley said.