'This virus is still in our province': Nova Scotia reports 7 new cases of COVID-19

HALIFAX -- The total number of confirmed cases of COVID-19 in Nova Scotia is nearing 1,000.

The province announced seven new cases on Wednesday, bringing the total number of cases to 998.

“This virus is still in our province and we need to continue to be proactive and follow the protocols,” said Premier Stephen McNeil during a news conference in Halifax Wednesday afternoon.

“The actions that we take not only protect ourselves but will protect all Nova Scotians.”

“We do know that several Northwood staff have tested positive in the last few days and we are doing an intense review of each of those cases to understand potential exposures for those individuals, what would be the likely source of them becoming infected,” said Dr. Robert Strang, Nova Scotia’s chief medical officer of health.

“As part of that review is a deep dive into our current infection control and cleaning protocols to make sure that everything necessary continues to be done.”

The province says two other facilities each have one staff member with an active case of COVID-19.

Northwood has seen the most significant outbreak of COVID-19 in the province. Of the 41 deaths, 35 have been at Northwood, which is the largest such facility east of Montreal.

On Wednesday, Northwood was reporting a total of 316 confirmed cases involving 226 residents and 90 staff members.

Seventy-four Northwood residents and 40 employees have now recovered from the virus.

What we know about the COVID-19 cases

Five people are currently in hospital. Two of those patients are in intensive care units.

The province says 661 people have now recovered from COVID-19 and their cases are considered resolved.

“So, about two-thirds of our cases, which is really good news,” said Strang.

There are cases across the province but most have been confirmed in the Nova Scotia Health Authority’s central zone, which contains the Halifax Regional Municipality. More information is available in an online map.

The western and eastern zones are seeing no new cases at this time. 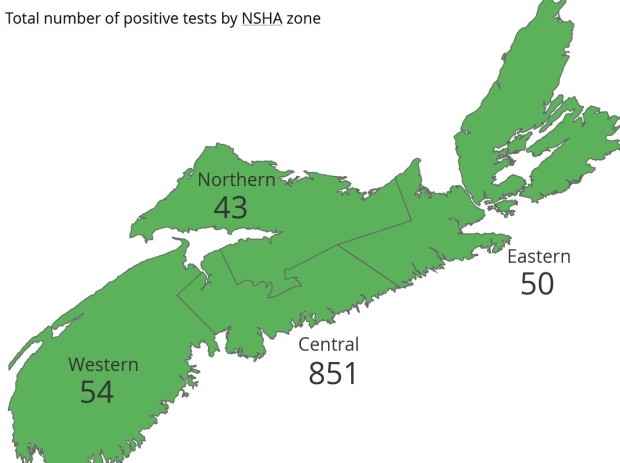 Strang said Wednesday that, while the vast majority of cases are in the Halifax area, residents across the province should continue to follow the protocols in place.

“All Nova Scotians, no matter where you live, there is still the … significant potential that COVID-19 could appear in any one of our communities,” said Strang.

“If we let our guard down in any one part of the province, that potentially gives the opportunity for the virus to come back and to spread within your communities.”

'Where the tragedy really lies': The crisis in Canada's long-term care homes

'No remedy, no rights': Canadians among foreigners blocked from leaving China