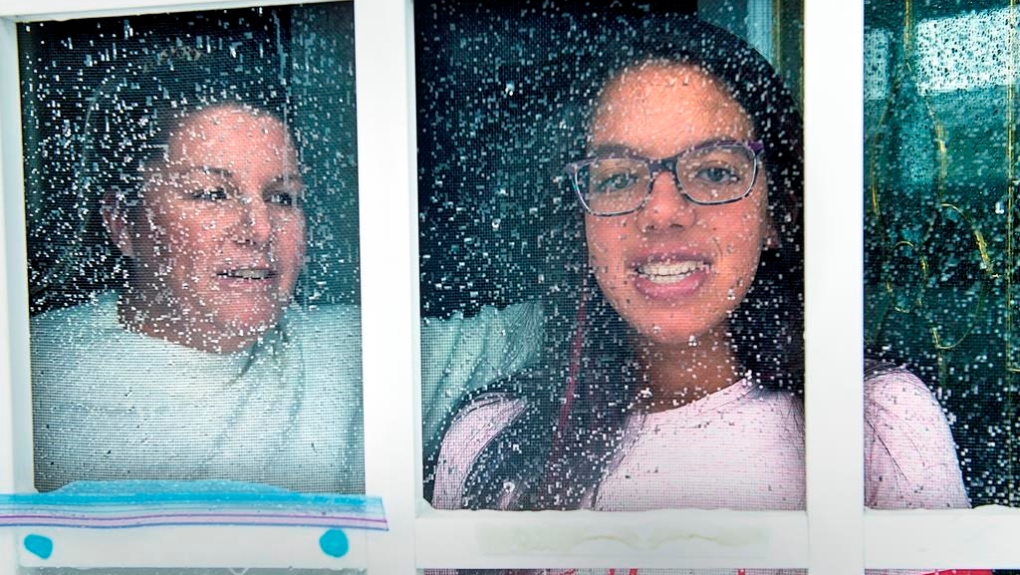 Lisa Ali and her 15-year-old daughter Tahlia look out from the front door of their Halifax-area home in Cole Harbour, N.S., Tuesday, March 24, 2020. THE CANADIAN PRESS/Andrew Vaughan

HALIFAX -- For 15-year-old Tahlia Ali, life in the time of COVID-19 has meant a hard wait for a lung transplant operation she hopes will change her future, but there have also been some lighter moments to savour.

She, her mother and her grandmother set off from Halifax in an RV on May 20 after receiving word that specialists preferred they be near the University Health Network and the Hospital for Sick Children in Toronto.

They're now living together in an Airbnb as the country's premiere transplant system gradually ramps up again.

"I'm pretty chill about it," Tahlia said during an interview on Monday.

Still, she's hoping for new lungs to give her the energy to pursue her passions of musical theatre and "being able to dance."

"My health has been declining," she said. "I would say I feel ready for the transplant."

The Halifax resident is diagnosed with pulmonary hypertension, which leads to a lack of oxygen to blood vessels in the lungs, and she has two holes in her heart. Her approval for a transplant came in February, but since the novel coronavirus surfaced in Canada, there have been a number of delays.

In mid-March, The Canadian Press reported that her plans to travel to Toronto for the operation were put on hold due to the pandemic. Since then, there have been challenges, and the road ahead remains uncertain.

"The fact we're here now is good .... But when we got here, we were told the number of organ donations was very small," said Tahlia's mother, Lisa Ali. They were also told Ronald McDonald House -- a charity that provides residences for families awaiting treatments -- doesn't currently have room for them.

Last month, doctors in Halifax detected increasing fluid around Tahlia's heart that had to be treated with medications. "Her health has gotten a little worse, and that makes me nervous," the 44-year-old mother said.

When Tahlia has her lung operation, doctors are also expected to make repairs to her heart in what's expected to be an eight-hour surgery.

Dr. Shaf Keshavjee, the director of the lung transplant program, said in an interview in March the delays in the program were necessary for safety reasons.

There was also reluctance at the time to have transplant teams fly around Canada to pick up and transport lungs. In addition, donations of organs fell sharply during the pandemic.

But this week the future is looking brighter, Keshavjee said in an interview on Saturday.

"We're open," he said. "The donations seem to have picked up. There were two lung transplants yesterday and another today. It's certainly a lower rate than it used to be, but it's getting busy again."

However, the challenge of matching a lung for size and blood type remains, the physician added. And the wait list has grown for the roughly 200 transplants carried out each year.

"We're up to 60 again on the waiting list, from levels of about 30 people (before the pandemic) .... And there's going to be a backlog of patients waiting for assessment to ensure they're ready for transplant," he said.

Still, he's finding the medical teams are starting to adapt with telemedicine and a testing system -- including a CT scan -- to ensure the safety of the donated organs.

And life for the Alis during the pandemic has also involved some unanticipated fun.

All three had always hoped to take a RV journey together, and as it unfolded, they encountered kindness along the way. Two campground owners allowed them an overnight stay, including one where the owner brought her horses for Tahlia to feed and pet.

Tahlia says she's learned to live life in the moment, "I've been chilling and talking to my friends (on social media)," she said. She plays board games, makes crafts and listens to music to pass the time.

Her 70-year-old grandmother, Judy Robichaud, says she is busy advocating for her granddaughter, trying to ensure they enter the Ronald McDonald House soon.

"It has given me more time to spend with my daughter and granddaughter, one-on-one time ... and so it's a bonding we haven't had for many years," she said.

The family has received funding from the provincial government, the David Foster Foundation and private fundraising.

But Lisa said her anxiety over the future will only relent once Tahlia's operation is successfully completed and they're driving home.

"That for me will feel more like the end of the journey," she said.