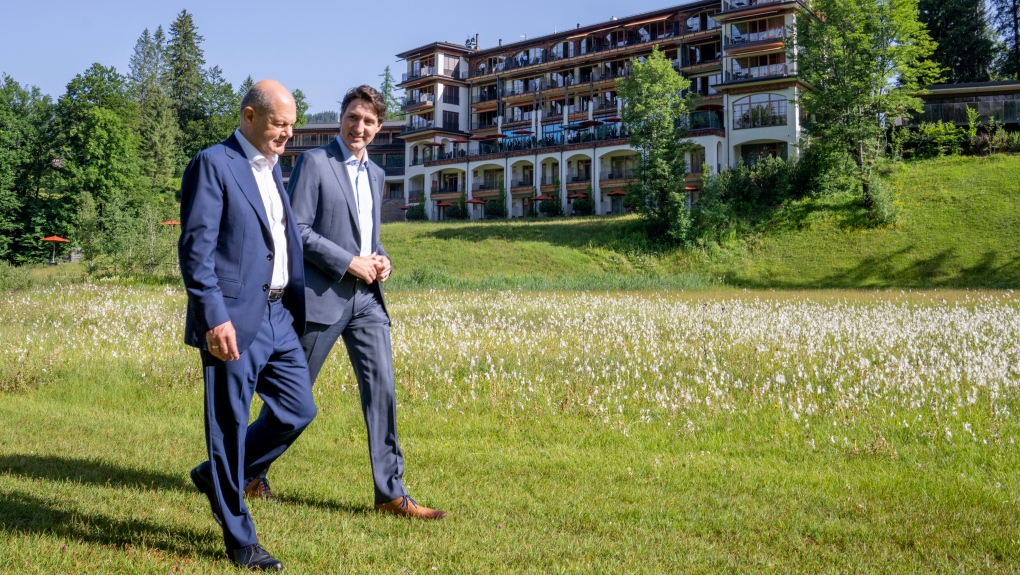 The German government on Friday issued a statement confirming the agreement will be signed Aug. 23 in Stephenville, where a Newfoundland-based company plans to build a zero-emission plant that will use wind energy to produce hydrogen and ammonia for export.

If approved, the project would be the first of its kind in Canada.

Germany is keen to find new sources of energy because Russia's invasion of Ukraine has led to a surge in natural gas prices. As well, Russia has reduced its flow of natural gas to its European customers, prompting concerns about supply shortages.

Meanwhile, the company behind the Newfoundland project, World Energy GH2, has said the first phase of the proposal calls for building up 164 onshore wind turbines to power a hydrogen production facility at the deep-sea port at Stephenville. Long-term plans call for tripling the size of the project.

"There is a heightened urgency for Canada to step into this new market that's in such high demand," said Stephenville Mayor Tom Rose, who noted the province did not lift a moratorium on wind farm development until this year.

"We're poised now to be the green energy hub of North America."

Among the companies behind the project is CFFI Ventures Inc., led by Nova Scotia-based billionaire John Risley, who is best known as co-founder of Clearwater Seafoods.

As for Trudeau and Scholz, Rose said they will be joined in Stephenville by cabinet ministers and a delegation of German business leaders who will attend a green energy trade show before the signing ceremony.

Rose said Stephenville is an ideal place for a wind farm because the area is known for having a world-class "wind corridor." As well, the town has the means to produce the large amounts of water needed for hydrogen production because heavy-duty infrastructure remains in place from the Abitibi-Price paper mill that closed in 2005.

"It appears to be the energy of the future and the demand is very robust," said Rose, who was born and raised in the area. "We're stepping up when another country needs our resources."

The multibillion-dollar project was registered with the province in June and now requires an environmental impact statement.

In its proposal, World Energy GH2 says it is on the cutting edge of a new, green industry.

"The development of large-scale green hydrogen production facilities is just starting, providing (Newfoundland and Labrador) and Canada with the opportunity and advantages of being a first mover in the green energy sector," the proposal says.

The company points out that the vast majority of existing hydrogen production relies on natural gas or coal for its electricity, which means it produces unwanted carbon emissions.

Meanwhile, the company says construction of its first wind farm is slated for late next year on the Port au Port Peninsula.

In Cape St. George, which is on the peninsula, Mayor Stella Cornect has said residents are worried about the project's potential impact on the area's delicate ecosystem, which includes rare and endangered plants.

On Saturday, the Prime Minister's Office confirmed Trudeau will accompany the chancellor on a brief Canadian visit that will include earlier stops in Montreal and Toronto, starting Aug. 21.

This report by The Canadian Press was first published Aug. 14, 2022.

Body of missing woman apparently swept out to sea in N.L. found as Fiona recovery begins

A day after post-tropical storm Fiona left a trail of destruction across Atlantic Canada and eastern Quebec, residents of a devastated coastal town in western Newfoundland learned of the death of one of their own.

Meteorologist's shocked reaction to Fiona: 'Like nothing I've ever seen'

NTV News' Chief Meteorologist Eddie Sheerr appeared shocked while offering a dour account of the impact post-tropical storm Fiona had on the southern part of Newfoundland and Labrador.

The herd of wild horses inhabiting Sable Island, which was directly in the path of post-tropical storm Fiona, appear to have come through the extreme weather safely.

Feds to lift border vaccine mandates, mandatory use of ArriveCan

The federal government is expected to officially announce the end of COVID-19 border restrictions today, including mandatory vaccinations, testing and quarantine of international travellers.

Around 100 Canadian troops deployed to each of N.S., P.E.I., N.L. for post-Fiona recovery: feds

In an update Sunday regarding the devastation of post-tropical storm Fiona in Atlantic Canada, federal officials confirmed that the Canadian Armed Forces are already on the ground in several provinces to assist and are on their way to others.

A gunman killed 13 people, including seven children, and wounded 21 other people in a school in central Russia on Monday, authorities said.

The recovery stage has begun after Fiona swept through Atlantic Canada, hundreds of troops have been deployed to help affected provinces, and many young Canadians feel they need an inheritance to reach their financial goals. Here's what you need to know to start your day.

How age is a big factor for immigration applicants to Canada