Both deaths occurred at the Northwood long-term care facility in Halifax.

"On behalf of all Nova Scotians, I extend my deepest condolences to the families and friends of these two individuals," said Premier Stephen McNeil. "I want to assure everyone, but particularly those who live and work at Northwood, that the health-care system has mobilized to help you through this."

This comes a day after the province announced that three Northwood residents died on Friday.

In a news conference on Sunday, premier Stephen McNeil announced that residents of Northwood who have recovered from COVID-19 will be moved to a local hotel. The first resident was taken to the hotel Sunday morning.

"The first resident was transferred earlier today by ambulance and I'm told that the family was there to wave as their mom moved in," McNeil said.

McNeil said Shannex has donated equipment, including electric beds, tables and other supplies for to support the care unit at the hotel.

"I want residents, families and staff to know that we're here to support them and work with them to bring the virus under control at this facility," added Strang in a statement. "Northwood is an excellent operator and I have confidence in their work. But this is a very large facility, the virus is circulating broadly, many staff and residents have tested positive and they need our help."

"We are so grateful for the support we've received from our health-care colleagues, so we can continue to focus on the care of our residents," said Janet Simm, CEO of Northwood. "With the emergency measures that are being put in place, these additional resources will help our team focus on what is most important - providing quality care for our residents. We remain committed to ensuring those in our care continue to receive the best care possible."

The province is also reporting 26 new cases of COVID-19 Sunday, bringing the province's total to 675.

The province says 200 people have recovered from the virus and their cases are considered resolved.

Twenty-one more residents and nine more staff members at a long-term care facility in Halifax have tested positive for COVID-19.

A total of 80 residents and 35 staff members at Northwood’s Halifax campus have now tested positive for the coronavirus, according to a statement posted on their website Saturday.

A total of five Northwood residents have now died of COVID-19 -- more than half of the nine deaths across the province.

There have also been four home-care workers and two health services staff from Northwood who have tested positive. Those numbers have not increased since April 12, but Northwood says they are currently testing additional Health Services staff for potential COVID-19 exposure, and those workers are now off work.

"As part of their COVID-19 plan, Northwood has established COVID units, where all of the people who have tested positive were moved into those units, but in the last few days those number shave grown signficantly, so they have had to keep people up on wards and isolated them as much as possible."

As of April 19, the province was reporting eight licensed long-term care homes in Nova Scotia with cases of COVID-19, involving 93 residents and 54 staff.

All 26 of Nova Scotia's new cases on Sunday were confirmed in the central zone, which contains the Halifax Regional Municipality. 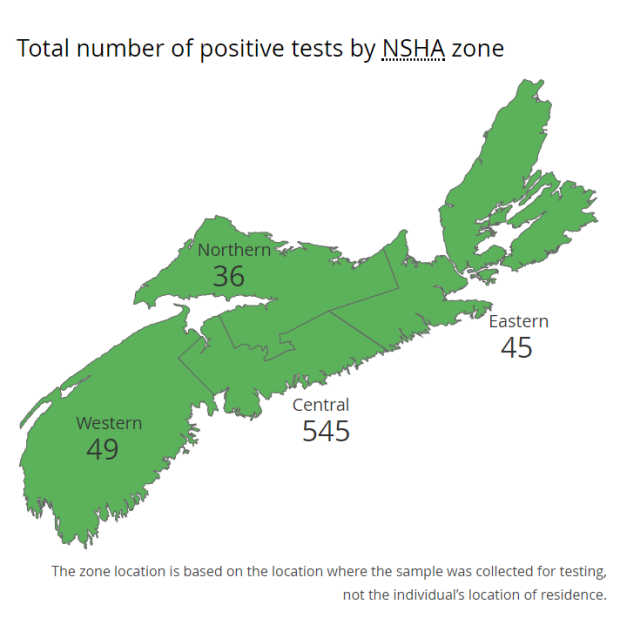 Does spraying disinfectant in public places kill the COVID-19 virus?

Idris Elba and Sabrina Dhowre Elba, recovering from COVID-19, to help others

Canada must 're-think' relationship with China over pandemic: Scheer

Is the COVID-19 baby boom a myth? How relationships might be tested during the pandemic

'Confined in sorrow': Former Governor General mourns loss of aunt without a funeral

Celine Dion, Lady Gaga offer hope at 'One World: Together At Home'