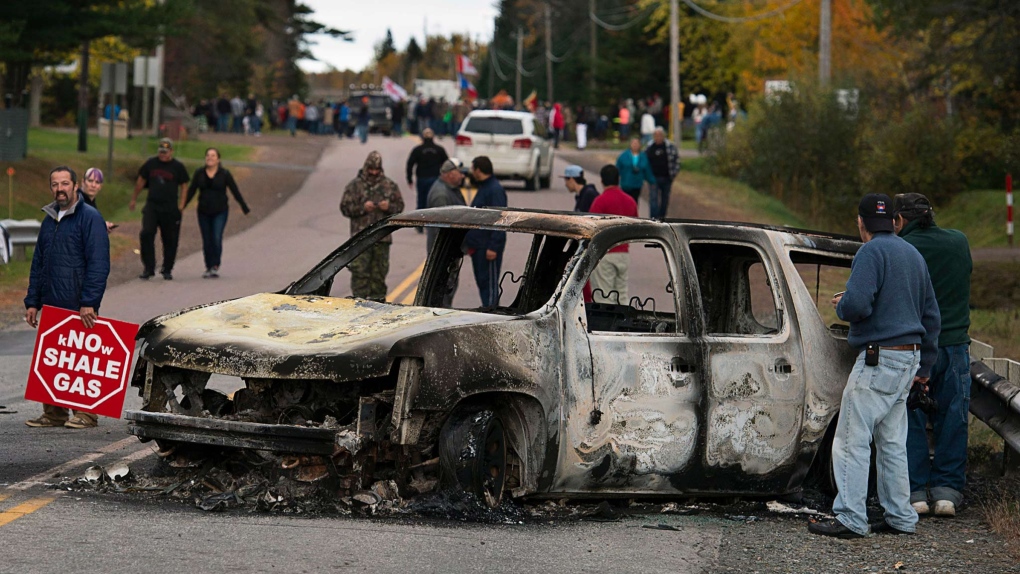 A destroyed police vehicle is seen in Rexton, N.B., Thursday, Oct.17, 2013. Forty people were arrested and weapons including guns and improvised explosive devices were seized when Mounties enforced the court-ordered injunction to end the blockade of a SWN Resources storage compound for exploration equipment and vehicles. (Andrew Vaughan / THE CANADIAN PRESS)

MONCTON, N.B. - A lawyer representing shale gas protesters who were arrested at a demonstration near Rexton, N.B., two weeks ago says they have been poorly treated by police and the justice system.

Alison Menard says some of the people still in custody have not been able to access their legal counsel or get personal hygiene products.

The province's Justice Department could not be immediately reached.

Menard and many of the protesters gathered on the steps of a courthouse in Moncton today to express their concerns.

Forty people were arrested after RCMP enforced an injunction on Oct. 17 to prevent people from blocking a compound near Rexton where SWN Resources was storing exploration equipment.

Police said they seized guns and improvised explosive devices when they enforced the injunction to end the blockade of the compound.

Six police vehicles were burned and police responded with pepper spray and fired non-lethal beanbag-type bullets to defuse the situation.