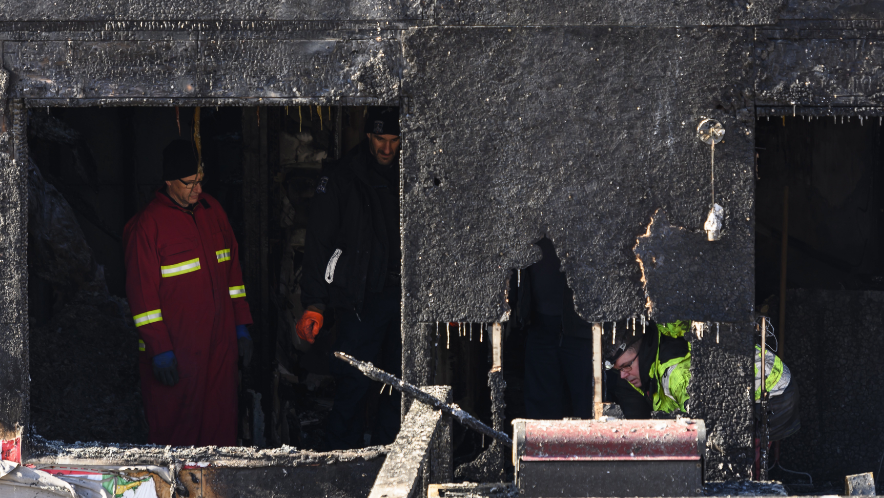 Police and firefighters investigate at the scene of a fatal house fire in the Spryfield community in Halifax on Tuesday, February 19, 2019. (THE CANADIAN PRESS/Darren Calabrese)

HALIFAX -- A group of volunteers came together in the Halifax area on Sunday to offer an information session on fire prevention in the wake of a deadly house fire that claimed the lives of seven children from a Syrian refugee family.

The event at a Halifax-area hotel was presented in both English and Arabic and largely attracted immigrant families -- who organizers said may not always know how to prevent fires, or what to do when they happen.

"I know Canadians and kids, they have that knowledge, but most of our backgrounds don't have that at all," explained Ghada ElSehemy, one of the organizers. "I felt that it's time to give this a go."

The session was held in memory of the seven Barho children, who died in a house fire in a Halifax suburb last month, just 18 months after their family arrived to Canada.

ElSehemy said the idea originally began as a bake sale to raise money for the children's parents, who survived the blaze. But it quickly evolved after organizers learned about another Syrian refugee family, who managed to escape unharmed when their New Brunswick home was destroyed in a fire just a few days later.

"We thought, let's do something educational for our community," she said.

Nuthaila Rihani, another organizer, agreed that there's a gap in information for newcomers to Canada when it comes to fire prevention.

She said houses in their home countries may be built from less flammable materials -- particularly in the Middle East, where homes are largely made from concrete or brick instead of wood -- and language barriers may prevent immigrants from accessing the information they need.

Rihani said that along with the difference in building materials, recent immigrants might not have had the same amount of fire prevention education that Canadians have.

"There's no sessions about fires at home, we never had sessions there," she said.

"After that shock (of the Barho fire) happened, they're more worried about their situation. They're wondering how they can protect themselves."

Along with fielding a number questions with the aid of an Arabic interpreter, Weatherby spoke at length about the importance of having an escape plan ready in case a fire breaks out, and having working smoke alarms.

"There's only so many options. Try to get out. If you can't get out your first way in your plan, go use your second way," she said.

"If your smoke alarms are working, then you should have enough time to get out, one or two ways. I cannot stress enough how important the smoke alarm is in your home."

The cause of the fast-moving fire which ripped through the Barho home last month is still unknown.

The tragedy, which rocked Halifax and the country, has prompted a number of fundraisers and initiatives to aid the children's grief-stricken mother, Kawthar Barho.

As of last week, the father, Ebraheim Barho, remained in hospital in critical but stable condition after undergoing burn surgery.