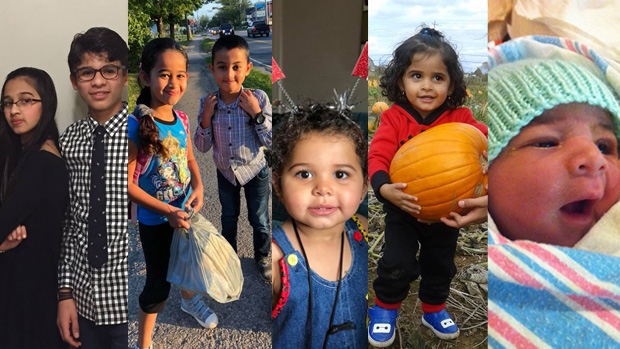 Pictured from left to right, Rola Barho, Ahmad Barho, Ola Barho, Mohammed Barho, Rana Barho, Hala Barho, and Abdullah Barho, died in a tragic house fire in the Spryfield area of Halifax on Feb. 19, 2019. They were members of a Syrian refugee family that came to Canada in 2017. (HEART Society/Facebook)

HALIFAX -- The Nova Scotia legislature opened its spring sitting Thursday by paying tribute to the seven children killed last week in a house fire in a Halifax suburb.

All members of the legislature observed a moment of silence in remembrance of the children of Kawthar and Ebraheim Barho, Syrian refugees who arrived in Halifax 18 months ago.

The fire that raced through their Spryfield home on Feb. 19 claimed the lives of children ranging in age from three months to their teens.

Statements were given in the house by all three parties, while the local Liberal MLA, Brendan Maguire, spoke on behalf of the government.

"February 19th will forever be etched into our souls," said Maguire. "The Barho family will forever be part of our communities, our province, in our prayers and in our heart."

Following the tribute, Finance Minister Karen Casey opened house business by announcing the spring budget will be tabled on March 26.

McNeil said in addition, the government would be introducing legislation on coastal protection, on expanding eligibility for the business innovation tax credit, and on regulating short term rentals like airbnbs.

The premier also pledged an overhaul of the province's privacy law, although he said legislation likely wouldn't be tabled until the fall sitting.

His promise came a day after Catherine Tully, the province's privacy commissioner, gave an impassioned plea on the need to modernize privacy legislation during an appearance before the legislature's public accounts committee.

"I think she (Tully) rightfully highlighted the changes needed since the last time this bill was updated," McNeil said. "We committed to that earlier and that work has actually been ongoing. We thought we might have it ready for this session but there are issues around legality, so I'm not sure it will be this session, maybe the fall."

However, McNeil said the changes would not include giving Tully order-making powers, something she has been advocating for.

Progressive Conservative Leader Tim Houston said his party has previously tabled legislation that would make Tully an officer of the legislature with order-making power.

Houston was asked whether what the Liberals are proposing amounts to an overhaul if those steps aren't included.

"We'll see what they come forward with, but those in my mind would be significant improvements to what we have at the moment so I would hope they would consider making those types of changes," said Houston.

Reports by Tully and auditor general Michael Pickup released last month made scathing assessments of a series of breaches of the province's freedom-of-information web portal in 2018.

Tully said the breaches were preventable and were caused by a "serious failure of due diligence" in the deployment of a new technology tool.

On Thursday, the Internal Services Department released a 33-page internal review conducted by Deloitte at a cost of $15,000.

It presented 35 ways the department could improve in its response to online security breaches following a series of interviews with staff as part of a "no fault discussion."

Among the findings was a belief by employees that roles and responsibilities were not sufficiently defined during the response to last April's breach of the freedom-of-information web portal. The review also said a method needs to be developed to evaluate the severity of threats and the sensitivity of data.

"All of these three (reports), the review from Deloitte, the two independent reports, really marry well together in making sure that we have a fulsome understanding of not just where the mistakes were made but how we move forward in a really productive and secure way," said Internal Services Minister Patricia Arab.

The Liberals introduced one new piece of legislation Thursday that would qualify volunteer members of the Canadian Coast Guard auxiliary for an exemption of their vehicle registration fee. The exemption includes cars and trucks.

The exemption has been in place for the last decade for volunteer firefighters and ground search and rescue workers.

The finance minister said the total cost to include about 400 active auxiliary members is estimated at about $70,000.