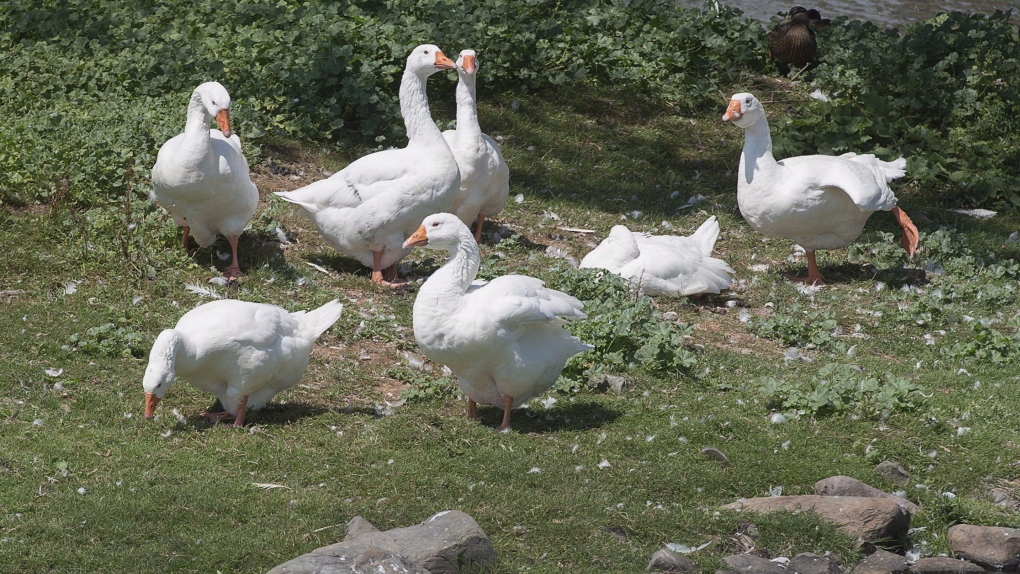 A gaggle of domestic white geese is seen at Sullivan's Pond in Dartmouth, N.S. on Friday, Aug. 11, 2017. (THE CANADIAN PRESS/Andrew Vaughan)

HALIFAX -- The rogue goose likely responsible for an unprovoked attack on an 87-year-old Halifax-area woman has been identified, and the angry bird may be removed from a well-known flock that long ago became a beloved symbol of downtown Dartmouth.

Hope Swinimer, director of the Hope for Wildlife rehabilitation centre, says the large, snow-white goose was among nine removed earlier this week from Sullivan's Pond and brought to her facility in Seaforth.

The seasonal move usually takes place in December, but the geese were moved to the centre a month early after local resident Willow Webb was knocked to the ground and pecked by some of the geese on Oct. 25. The attack left Webb, who uses a walker, with a broken pelvis and elbow.

"I think I've figured out which goose may have caused the attack from just having him here the last few days," Swinimer said in an interview.

"Whenever you have a group of animals, you always tend to find one that's sort of the protector of that group."

Webb's plight has figured prominently in local news coverage, mainly because the geese are widely known as a calming presence as they glide across the pond and, at times, use a nearby crosswalk to reach the local lawn-bowling club.

The typically laid-back waterfowl have assumed a certain degree of celebrity in Nova Scotia.

Inside local shops, you'll find T-shirts bearing their likenesses. Bumper stickers proclaim: "Honk (like a goose) if you love Dartmouth!"

The Dart Gallery offers souvenirs that show four geese on a crosswalk, mimicking the famous image of The Beatles crossing Abbey Road.

And there was an outpouring of grief in 2017 when two of the geese were stuck and killed by a car while crossing Prince Albert Road.

Days later, dozens of mourners marched in the rain to pay their respects at a memorial service.

As for the combative goose in question, that bird is a newcomer to the flock -- one of four younger geese added to the older group earlier this year.

From the beginning, the younger contingent was bad news. Those who frequent the park complained about the smaller gaggle, which were known to chase joggers and confront unsuspecting visitors with raucous honking.

Local resident Merle Gracie said the "lead goose" bit her as she walked through the urban park over the summer. Gracie told Global News that goose was able to extend its neck "long enough to nip me."

Swinimer said it's clear the new geese were causing trouble, adding their fate will be decided the Halifax Regional Municipality, which owns the animals.

"We could hold the lead goose and a partner behind and not return those to (the pond) if that's what they decide to do," Swinimer said.

However, that might not solve the problem, she said.

"Another goose will just step up and take the leadership role.... It's just how nature works," Swinimer said.

Aside from the possibility of dividing the flock, she said, it will be important to remind the public that feeding the geese will only encourage hostile behaviour.

-- With files from Euan MacDonald