With beach weather returning, here's a refresher on riptides

A rip current is created when water washed up on shore by wave action is drawn back to the ocean by gravity.

After a long wait we finally have some beach weather in the forecast.

Before dipping more than your toes in the ocean water though, it’s a good idea to brush up on some basic safety. First off the water temperatures around the Maritimes are still below 15 degrees and that seems to be the threshold where multiple organizations recommend being equipped with a drysuit or wetsuit for immersion in order to decrease the risk of cold water shock and hypothermia.

The warmest waters around the Maritimes currently are in Northumberland Strait and Gulf of St. Lawrence, where they’ve come up into a general range of 12 to 14 degrees. For context an Olympic swimming pool is usually at a temperature of 25 to 28 degrees for competitive events.

Surf and ocean current conditions can also be rough and dangerous. This includes the presence of rip currents. A rip current is created when water washed up on shore by wave action is drawn back to the ocean by gravity.

Sufficiently strong wave action, as well as coastal terrain, can create an area along the beach where this return of water to the sea is concentrated. The result ends up being a current that moves from the shore and out to open ocean water.

Signs that there is a rip current present can include a break in the pattern of waves on the beach, a trail or river of foam running from the beach and back to sea in a relatively straight line, and discolouration of the water in the rip current due to stirred sand and sediment. 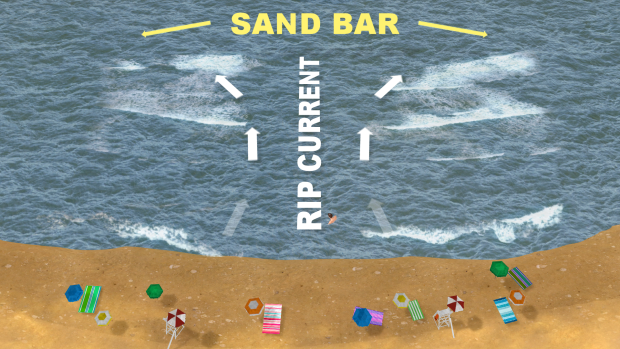 Swimmers who are caught in a rip current and try to swim back to shore directly against it can tire and need rescue, or in the worst case, drown. Since the currents are relatively narrow staying calm and swimming parallel to the shoreline until clear of the current (30 metres is recommended) before turning to shore is a way to escape.

A rip current also tends to weaken and dissipate beyond the wave break. That means that a swimmer who is carried out past the break will usually be able to signal for help or swim back to shore, provided they do so in an area where the waves are breaking so as to avoid entering back in the rip current area again. 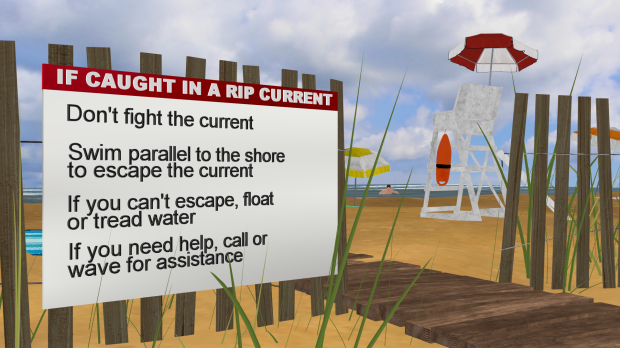 There have already been reports this year of strong rip currents in the Maritimes. On Wednesday, Parks Canada officials issued a notice recommending people stay out of the water for numerous beaches along the north shoreline of Prince Edward Island because of strong rip current conditions. Due to the highly local nature of rip currents, information on their presence is usually only available when a lifeguard is present and is able to send a report for an area.

There are online sources for surf information available for some of the beaches in the Maritimes. For information on Prince Edward Island beaches, go to this link, and information for Nova Scotia beaches can be found here.