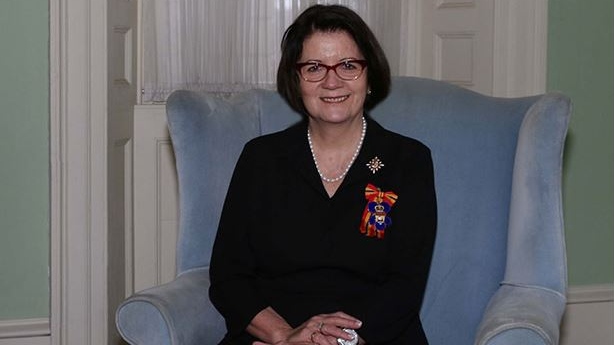 New Brunswick Lt.-Gov. Jocelyne Roy Vienneau has been forthright with the leaders on their responsibilities -- including the election of a Speaker. (GOVERNMENT OF NEW BRUNSWICK)

FREDERICTON -- New Brunswick's lieutenant-governor says the premier and other party leaders need to work together to avoid another election.

In a brief statement, Tim Richardson, the principal secretary to Lt-Gov. Jocelyne Roy Vienneau, says the lieutenant-governor has been clear with the leaders on their responsibilities -- including the election of a Speaker.

"Since the recent vote, Her Honour the Lieutenant Governor, has been forthright with the Premier and all party leaders that another provincial election is not in the best interest of New Brunswickers," he wrote.

"It is the responsibility of the Members of the Legislative Assembly to elect a Speaker. The Lt-Gov knows her constitutional responsibility if the MLA's cannot reach a decision."

The legislature is set to begin a new session on Oct. 23 with the election of a Speaker, but so far every party is refusing to offer a member for the job because of the tight standings in the house.

Premier Brian Gallant's Liberals are trying to hang onto power despite only winning 21 seats in last month's election -- one fewer than the Progressive Conservatives -- and has no official coalition to secure victory on a confidence vote in the 49 seat legislature.

On Tuesday, Gallant said he's still hoping another party will offer a Speaker, to avoid putting the lieutenant-governor "in a difficult position."

"We are still very hopeful that another political party will put up a speaker so that we as a government can get the opportunity to be able to gain the confidence of the house," he said.

But so far the other parties have refused, and Progressive Conservative Leader Blaine Higgs repeated his position Tuesday.

"The government has to put up a Speaker. It's their obligation to do so. It's not our obligation at this point in time," Higgs said, adding he believes Gallant will relent.

"I think that he will, at the end of the day, put a Speaker forward out of his own caucus if push comes to shove."

Gallant told reporters Tuesday he is pressing ahead and has invited the other leaders to meet with him to discuss what they need to see in a throne speech in order to support it.

"Nobody wants an election right now. New Brunswickers have just gone to the polls. They want us to try something new. I think they want to see if we can make this new type of situation work," Gallant said.

The Greens and the Peoples' Alliance parties each won three seats but the Liberals have not been able to reach a confidence and supply agreement with either one.

There have been some suggestions that the Liberals and Tories should form an alliance, but Gallant said he doesn't see that happening.

"I do see some fundamental differences in the way Mr. Higgs and I would like to see this province move forward," Gallant said.

And Higgs said it doesn't matter what Gallant puts in the throne speech -- he won't support it.

"The throne speech is irrelevant. This is a non-confidence motion on the performance of this government over the last four years," Higgs said.

"I will not be supporting the throne speech and it doesn't matter what it says."

Higgs said he expects his meeting with Gallant on Wednesday would be "interesting."