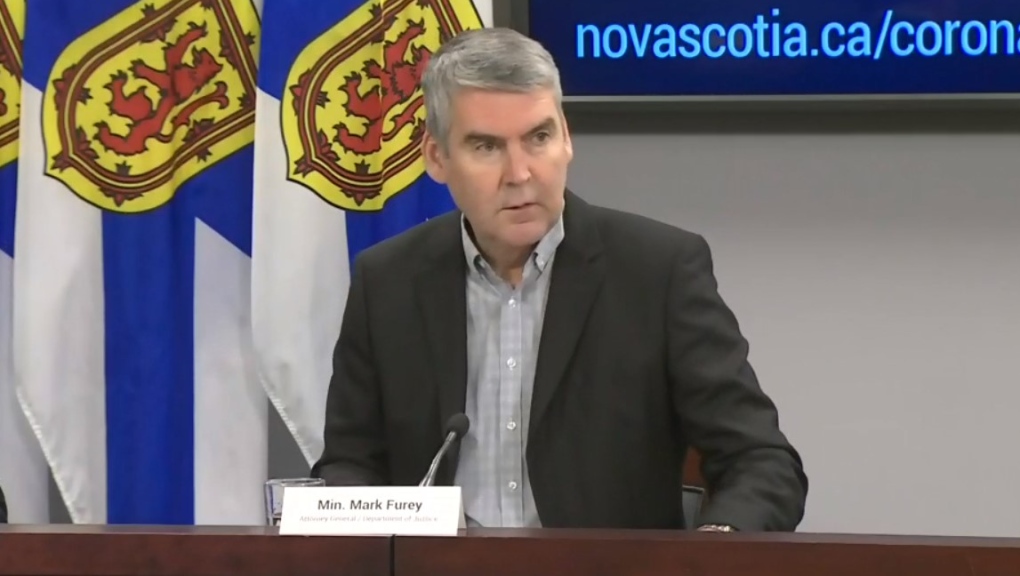 Nova Scotia Premier Stephen McNeil declares a state of emergency due to COVID-19 during a news conference in Halifax on March 22, 2020.

HALIFAX -- Health officials and politicians in Atlantic Canada redoubled their efforts Monday to warn residents that failure to comply with social distancing rules will lead to more COVID-19 infections -- and in some cases, hefty fines.

In Newfoundland and Labrador, Premier Dwight Ball said he was "baffled" by reports that some people arriving in the province were spotted hanging around public spaces rather heading directly home, as ordered by new public health emergency rules.

"This is not a cautious yellow light, this is a bright red light," Ball told a news conference, adding that some businesses are also ignoring the orders. "Some of you will be receiving a call from law enforcement."

Health officials confirmed a big jump in the province's number of probable infections Monday, saying they had identified 15 new presumptive cases of COVID-19, bringing the total to 20 presumptive and four confirmed cases.

Canada Post later confirmed it had halted mail delivery in St. John's, N.L., and neighbouring Mount Pearl after one of its employees tested positive for COVID-19, a result confirmed by the public health authority.

Employees at the main St. John's mail processing facility were informed and sent home, and Canada Post says it will continue to evaluate the situation.

Like several other provinces, Newfoundland and Labrador has ordered additional business closures, including non-essential retail stores, spas and hair salons. Fitzgerald also ordered all restaurants to close in-person dining and prohibited gatherings of more than 10 people.

In Prince Edward Island, Justice Minister Bloyce Thompson announced new enforcement measures for anyone not complying with the directive to self-isolate.

Chief medical officer Dr. Heather Morrison confirmed the province's number of cases remained unchanged at only three, but she made it clear that some people remain confused about the rules surrounding social distancing and self-isolation.

"They are terms that are new to all of us," she told a news conference in Charlottetown.

Though there hasn't been any evidence of community transmission on the Island, Morrison asked parents of teens to take a direct approach to informing them about the rules, which include staying at home and keeping others at least two metres away during social interactions.

Morrison said her mother did not attend her grandson's recent birthday because "we wanted to try to protect her .... It was hard for her and it was hard for my son."

Though there were no new cases reported in New Brunswick -- there were 17 confirmed cases as of Monday -- Premier Blaine Higgs said people and businesses must do a better job of complying with health directives.

"We will enforce those rules and we'll enforce them through fines and penalties, as required," Higgs said. "These are not optional. These are not recommendations. They are requirements and we expect them to be adhered to."

Higgs said a recent survey of 762 businesses indicated 94 per cent were following the rules, but he said that number should be 100 per cent.

Nova Scotia also announced a significant increase in cases Monday, a day after Premier Stephen McNeil declared a state of emergency and ramped up efforts to slow the spread of the virus.

Health officials announced that another 13 confirmed cases had been identified, meaning Nova Scotia has 41 confirmed cases, all of them either travel-related or among family members connected to earlier cases. One person remains in hospital.

"It is your obligation to your fellow Nova Scotians to find yourself at home ... and that prevents the spread of this virus," McNeil told a news conference. "It is absolutely the number one way that we will be able to get on top of this."

Nova Scotia's chief medical officer of health, Dr. Robert Strang, said it was particularly important for people returning to the province from March break trips to self-isolate for 14 days.

"This means going straight home -- do not stop at the grocery store, go to the office or visit family and friends," he said. "Stay close to home. If you have a yard or a balcony you can go there, but please don't go any further."

Under Nova Scotia's Health Protection Act, people are now prohibited from gathering in groups larger than five. Individuals caught violating the limit face a $1,000 fine, and businesses face a $7,500 fine.

All of Nova Scotia's provincial parks are now closed, as are all municipal parks, beaches, trails, playgrounds and sports facilities.

As well, anyone entering Nova Scotia as of Monday must self-isolate for 14 days, though there are exceptions for people who provide essential services. The new measures include vehicle checks at the New Brunswick border.

-- With files from Keith Doucette in Halifax, Holly McKenzie-Sutter in St. John's, N.L., and Kevin Bissett in Fredericton.

This report by The Canadian Press was first published March 23, 2020.

Ontario orders all non-essential businesses to shut down

U.S. approves limited use of chloroquine in COVID-19 fight, but caution still urged

'Knock, drop and go': No more signing for Canada Post packages at the door

Don't take your kids to a playground during COVID-19 pandemic, urges doctor

In global fight vs. virus, over 1.5 billion told: Stay home