HALIFAX -- The Nova Scotia government is “bursting the bubble” and allowing residents to “get that long-awaited hug.”

“Effective today, we are bursting the bubble,” said McNeil during a news conference in Halifax.

“We know that a lot of you have been waiting for months to come in close contact with people you love. Dr. Strang and I are happy to tell you, you can finally get that long-awaited hug from your grandchild, a parent or a close friend.”

McNeil said those who gather in a group of 10 are not required to be exclusive, but he is urging Nova Scotians to maintain a consistent group -- especially those who are more at risk of complications from COVID-19.

Up to 50 people can now gather at social events, including faith gatherings, weddings, and arts and culture events such as theatre performances, dance recitals, festivals and concerts.

The 50-person rule also applies to funerals and sports and physical activities.

However, McNeil said those in attendance must still maintain a physical distance of two metres, or six feet.

He said social gatherings can be held inside, but only if physical distancing can be maintained.

“Let’s not forget the other core principles,” said the premier. “Washing your hands, good hygiene, and wearing a mask when you feel that it is necessary, and definitely when you can’t maintain physical distancing.”

Businesses that are too small to ensure physical distancing can have up to 10 people on their premises at a time.

“To the kids out there, your playgrounds are open. So hit the slide, climb the monkey bars or swing high, and most importantly, have fun and be safe,” said McNeil.

However, the province said municipalities and playground owners will need time to prepare them for reopening, so they may not reopen right away.

The Halifax Regional Municipality confirmed Thursday that it is reopening all municipal playgrounds immediately.

McNeil said talks about a tourism “bubble” between the Atlantic Canadian provinces are ongoing among the four premiers and he hopes to announce a date soon.

The bubble would allow Atlantic Canadians to travel within the four provinces without having to self-isolate.

McNeil also said he hopes to further ease travel restrictions so Canadians outside the Atlantic provinces can also visit Nova Scotia this summer.

“Dr. Strang and I are discussing about opening ourselves up with the Atlantic bubble, with our Atlantic colleagues, and that will be our first step,” said McNeil.

“And the next step after that will be opening up our province to the rest of Canada. We have to be open to this because tourism is one of the most important industries.”

No dates have been set at this time, but McNeil said he hopes to ease travel restrictions next month.

Visitors would not have to self-isolate for 14 days, but public health protocols, such as maintaining physical distance, will still have to be followed.

“When we open up our province, these public health protocols will be put in place and we’ll have to continue to follow them,” said McNeil. “As we do that, if there is a second wave, we won’t kind of get the spike like we did in the midst of this one, or like other Canadian provinces did, and we’ll be able to continue to keep our economy going.”

Strang announced on June 10 that he would be having the surgery in New Brunswick and would self-isolate for 14 days upon returning to Nova Scotia.

“Dr. Strang and I have been talking on the phone this week and he’s asked me to let you know that his procedure went well and he’s doing fine and he continues to self-isolate at home,” said McNeil on Thursday.

The further easing of COVID-19 restrictions comes as the province continues its streak of no new cases.

Thursday marks the ninth day Nova Scotia has reported no new cases of COVID-19. The last new case was reported on June 9.

“The good doctor and I have been very encouraged to see several days in a row of no new cases of COVID,” said McNeil.

“That’s thanks to all of you who have been following the public health protocols and also because we are flattening the curve.”

The province isn’t reporting any additional recoveries at this time. There are still 997 resolved cases and two active cases of the virus in Nova Scotia. 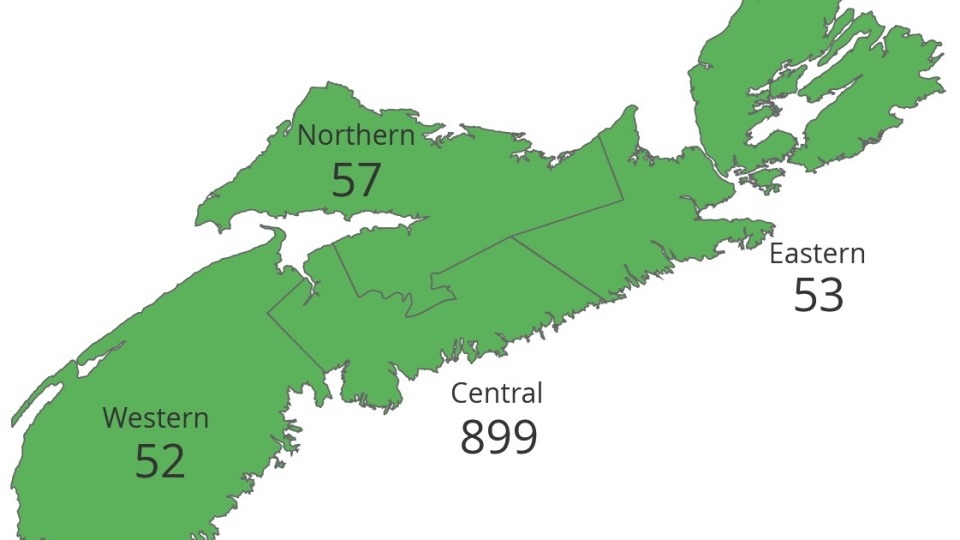