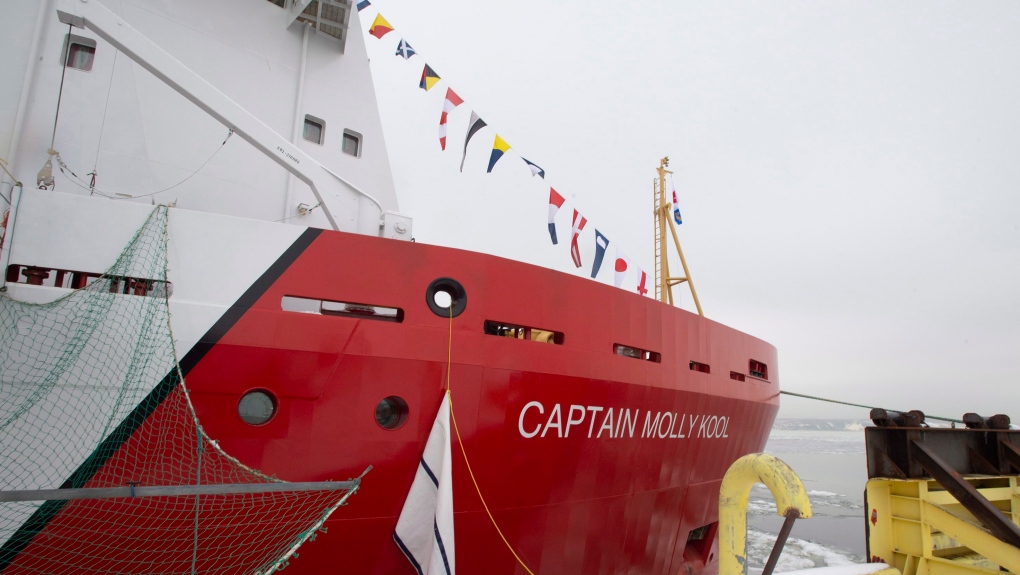 The CCGS Captain Molly Kool is presented to the media after undergoing refit and conversion work at the Davie shipyard, Friday, December 14, 2018 in Levis, Que. (THE CANADIAN PRESS/Jacques Boissinot)

ST. JOHN'S, N.L. -- The first new Canadian Coast Guard icebreaker in 25 years, named after a female sea pioneer, was officially dedicated to the fleet on Thursday.

Myrtle "Molly" Kool was the first woman in North America to become a licensed ship captain. She was born to a seafaring family in 1916 in Alma, N.B., and earned a reputation as a fearless mariner transporting cargo on the Bay of Fundy.

Kool's sister, Martha Miller, and members of the Kool family attended the ceremony. The family was also received on board Wednesday for dinner and a tour by the vessel's commanding officer, Catherine Lacombe.

Standing by the ship on a rare sunny day in St. John's, Lacombe said it's an "exceptional feeling" to celebrate the vessel and honour the late captain's legacy.

"It's very great to acknowledge a great person like this and the accomplishment that she did to advance women in the marine industry, and the status of women overall in Canada," Lacombe said.

The federal government noted in a news release that Kool's 1939 coastal master's certification led to formal changes in the Canada Shipping Act, adding the prefix "she" when all mariners had been formerly been referred to as "he."

"Big legacy. And a big legacy to follow, too," Lacombe said.

The vessel's next voyage will take it to the southern Arctic, leaving St. John's in June for icebreaking services around the Hudson Strait and Hudson's Bay.

In a Canadian Coast Guard video, Miller expressed pride in her sister and said the vessel's naming has been meaningful for the whole family.

"I feel it's wonderful that it's an icebreaker that's being named after her, because when she was going to sea, she did everything," Miller said of her sister, who died in 2009. "Didn't matter what it was, she did it, and that's what an icebreaker does. She would have been thrilled."

The Coast Guard said the ship's name was chosen to commemorate the captain's achievements and the contributions of all seafaring women. It said the vessel, one of three bought from Norway last August, will provide essential services by keeping people safe at sea, preventing ice jams and maintaining shipping routes.

The government cited the cost for the three icebreakers as $610 million in August when it announced its plan to buy them and have them refitted at the Davie Shipyard in Quebec.

Budget documents later revealed that with tariffs, brokerage fees, engineering work and other costs, the total cost had risen to $827 million.