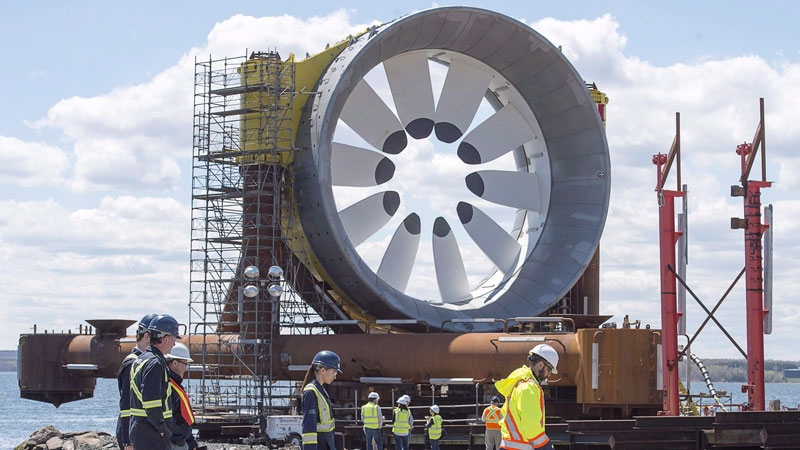 Workers walk past a turbine for the Cape Sharp Tidal project at the Pictou Shipyard in Pictou, N.S., on in a May 19, 2016, file photo. THE CANADIAN PRESS/Andrew Vaughan

HALIFAX -- The Cape Sharp Tidal turbine spinning in the Bay of Fundy is now being remotely monitored, more than a month after the project was suspended when Paris-based Naval Energies pulled its funding.

A former project partner, Halifax-based Emera Inc., issued a statement Thursday saying it had hooked up all environmental monitoring devices required for regulatory compliance and they are transferring data to shore.

The equipment includes three hydrophones, one sonar and three acoustic Doppler current profilers, along with a video camera pointed at the rotor.

Emera remains a shareholder in Cape Sharp Tidal, but recently announced it was pulling out of the project.

However, the company says it will continue working with Cape Sharp Tidal to make sure the turbine remains in compliance with environmental rules.

Last month, Nova Scotia Energy Minister Derek Mombourquette said the turbine was not in compliance with its environmental assessment because environmental monitoring had stopped after Naval Energies walked away from the project.