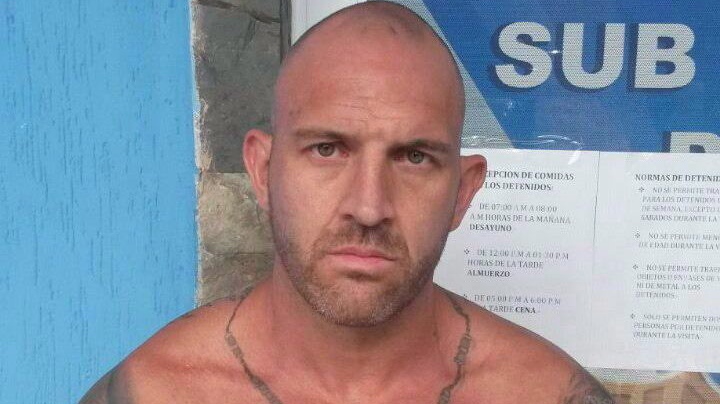 Steven Douglas Skinner is shown after being arrested in Playa El Yaque, on Margarita Island in Venezuela, in police handout photo posted on Twitter by Cuerpo de Investigaciones Cientificas, Penales y Criminalisticas (CICPC) director Douglas Rico. Officials in South America say a Nova Scotia man accused of murder was allegedly one of the kingpins of a Colombian drug cartel before he was arrested on a Venezuela beach and extradited back to Canada. (THE CANADIAN PRESS/HO - CICPC)

A Halifax-area man accused of murder was allegedly one of the kingpins of a Colombian drug cartel before he was arrested on a Venezuelan beach and extradited back to Canada, officials in South America say.

The attorney general said along with his accomplice -- who he allegedly later killed before fleeing to neighbouring Venezuela -- Skinner recruited drug mules to smuggle cocaine to Canada, the United States and Europe

They bought the drug mules passports, airline tickets and clothing as well as paid for expenses abroad, promising a bonus payment when they returned to Colombia, the attorney general said.

Skinner was arrested by Venezuelan law enforcement on Margarita Island in 2016, and was extradited to Canada the following year to face second-degree murder charges in the death of Stacey Adams in Nova Scotia.

A photo released by Venezuelan authorities after his arrest showed the one-time fugitive in colourful swim trunks, with tattoos on both arms and his bare chest covered in sand.

Skinner, who fought as a light-heavyweight at 205 pounds, had a 3-2 professional record, according to mixed martial arts website Sherdog.com.

Police had issued an international warrant for Skinner's arrest shortly after Adams was found dead in Lake Echo in April 2011.

The RCMP worked with Venezuelan authorities for more than a year before Skinner was arrested.

Colombian officials said the four-year investigation into the liquid cocaine smuggling cartel led to 27 arrests, including eight people responsible for the cartel's logistics, and the confiscation of 46 properties, 12 vehicles and four commercial establishments.