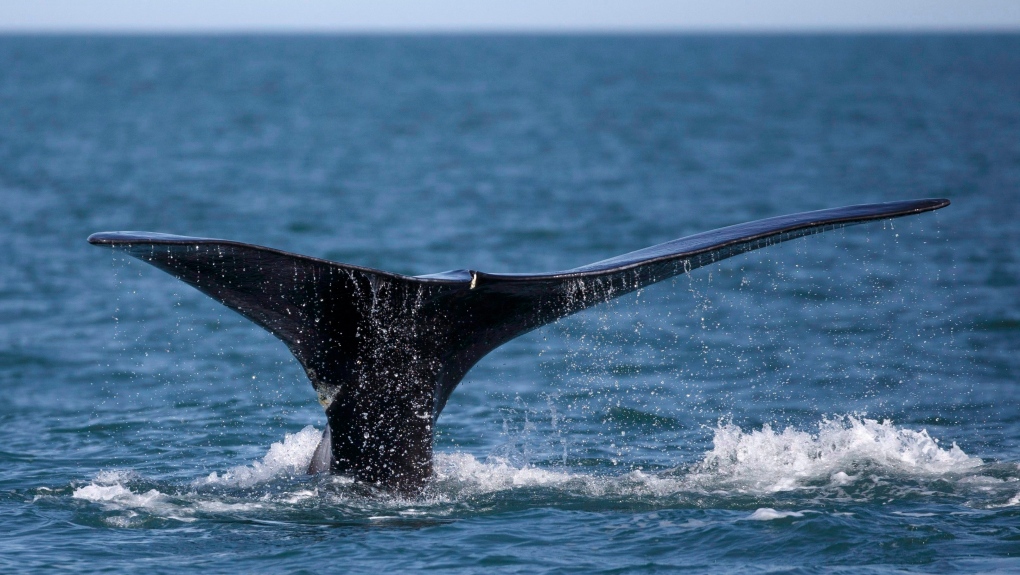 A North Atlantic right whale appears at the surface of Cape Cod bay off the coast of Plymouth, Mass., on March 28, 2018. (THE CANADIAN PRESS/AP-Michael Dwyer)

OTTAWA -- Canada's environmental watchdog says the federal government waited to take specific action to protect some of its most at-risk whales until the majestic creatures were already in great peril.

Environment Commissioner Julie Gelfand says Canada had the tools to safeguard North Atlantic right whales, Southern resident killer whales and other marine mammals from being hit by ships, tangled in fishing gear or losing their food sources -- but it waited until after 12 right whales died in a single summer and the killer whale population was on the verge of extinction.

"I hope this is not too little, too late," Gelfand said in her latest round of audits released today.

Her office also looked at how well Health Canada and Environment and Climate Change Canada are controlling the risk of toxic substances and found there is still a long way to go.

Gelfand was pleased to see the government finally following its own directive to do strategic environmental assessments of all policies, plans and programs considered by cabinet, including the potential economic, social and environmental impacts.

In 2015, fewer than half of the 26 departments and government organizations that were supposed to be doing this actually followed through, and in 2016 and 2017 the number dropped to one-quarter. But in 2018, 93 per cent of the organizations were doing it, although the auditors didn't study the quality of the assessments done.

"In our view, this marks progress on the path to creating the balance that is required to achieve sustainable development," Gelfand writes in her report.

Gelfand's latest audits come just as Ottawa is trying to prove to the courts it is doing enough to protect the Southern resident killer whale in particular from risks, so it can go forward with a plan to expand the Trans Mountain pipeline.

Canada's waterways are home to 40 different species of marine mammals ranging from whales and dolphins to seals and sea lions. Nine of them are endangered and another five are listed as threatened.

There are just 75 Southern resident killer whales remaining. They were listed as endangered in 2003 but the plan to recover them wasn't finished until 2017, four years late, Gelfand's report says.

The audit says Fisheries and Oceans didn't do anything specific to address the lack of food sources for the killer whales, namely Chinook salmon, until this past July.

Overall, Gelfand found Fisheries couldn't say what it had done to protect 11 of the 14 whales that are endangered or threatened.

For the other three, including the North Atlantic right whales and Southern resident killer whales, the department's own reviews showed the measures it had put in place to reduce things like noise disturbances and fishing-gear entanglements were not good enough.

Gelfand found the government's Marine Mammal Regulations, developed in 2012, are supposed to protect marine mammals from the noise and disturbance posed by boats. But those regulations weren't finalized until last July.

In the Salish Sea alone, more than 3,200 commercial shipping vessels and over 1,000 B.C. ferries move through the water every month, creating noise and disturbances that distress the orcas and other mammals. The mammals are also at risk of being hit by boats.

In 2017, many of the 12 North Atlantic right whales that died were hit by a boat.

Fisheries Minister Jonathan Wilkinson said recently a member of his staff was on the water and came upon killer whales when a large ferry suddenly bore down on them and barrelled right through the pods. He said he wants to ensure that sort of thing doesn't recur.

The auditors note the Oceans Protection Plan announced in 2016 does include additional measures to protect killer whales and right whales from ship strikes and other risks posed by marine vessels.