No reported right whale deaths in Canadian waters so far in 2018, officials say 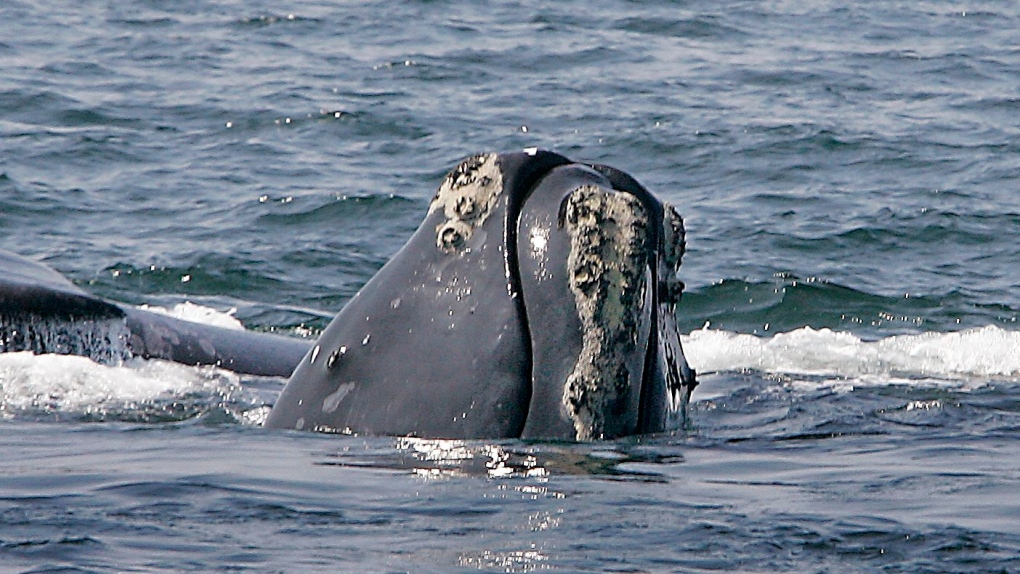 HALIFAX -- There have been no reported deaths of North Atlantic right whales in Canadian waters this year -- with dozens of the endangered mammals spotted amid strict fishing and vessel speed restrictions, federal officials say.

There were 12 whale deaths last year in Canadian waters, half of those in June.

"Earlier in the year there was a report in the United States of one (death) ... but in Canadian waters there have been none," said Adam Burns, director general of fisheries resource management at the Department of Fisheries and Oceans (DFO).

At least 18 right whales have been found dead overall in Canadian and U.S. waters since 2017, likely due to rope entanglements and ship collisions.

DFO said Thursday that aerial surveillance had so far detected at least 75 whales in the southern Gulf of St. Lawrence.

"This number likely underestimates the total number of right whales that may be present in the southern Gulf or in Canadian waters at this time," said Jean Landry, the department's director of marine mammal science.

The closures have drawn the ire of some lobster fishermen, who say the latest closures have squeezed them into tight proximity in zones that are already heavily fished.

Nearly 500 brought empty lobster traps to Caraquet, N.B., on Thursday to protest against the continuing closures. They created a wall of traps outside a building where Acadie-Bathurst Liberal MP Serge Cormier has an office.

But with the lobster and snow crab seasons set to wrap up at the end of this month, Burns said DFO isn't about to relent on urgent measures, given the unprecedented number of right whale deaths last year.

"These measures have a real impact on fish harvesters, processors, and communities in Atlantic Canada; however the long-term economic risks of not adequately protecting North Atlantic right whales is greater," Burns said.

He said there has already been a temporary suspension of Marine Stewardship Council certification for the snow crab fishery in the southern Gulf, and additional trade and eco-certification impacts could result in "long term serious economic impacts to coastal communities in Atlantic Canada and Quebec."

Still the industry continues to speak out with an eye to the future after reports of lobster landings that are down by as much as 25 per cent in some areas.

Groups such as the Maritime Fishermen's Union and the Pecheurs professionnels du Sud de la Gaspesie have said frustration is mounting after Fisheries Minister Dominic LeBlanc decided not to exempt waters up to 10 fathoms deep from the closures.

LeBlanc has said he isn't insensitive to fishermen's concerns and Ottawa is considering ways to alleviate the economic hardship. That includes measures to help processing plant workers qualify for Employment Insurance, and a possible fall opening of the lobster fishery to make up for lost days.

The Lobster Council of Canada called for measures that balance protection with the impact on fishermen.

"While we all agree we must do what we can to ensure the protection of the North Atlantic right whale, we believe we must continue to monitor the impact many of these mitigation measures are having on the people and communities that rely on the lobster fishery for their livelihood," council executive director Geoff Irvine said in a news release Wednesday.

"We need to continue to look for the right balance to allow the fishery to continue while ensuring the right whale's protection."

Meanwhile, Transport Canada provided statistics on its mandatory slow-down area in the western Gulf, where vessels of 20 metres or larger are limited to a speed of 10 knots.

Luc Brisebois, executive director of marine safety and security, said 1,085 vessels have been monitored to date. Of that number, 106 were recorded above the speed limit.

"Out of those 106, there were 84 deemed non-violation," Brisebois said, for issues related to time at speed, and the effects of weather or sea conditions.

He said 21 cases are still under review, but since the slowdown was implemented April 28 only one vessel has been found in violation, resulting in a $6,000 fine.