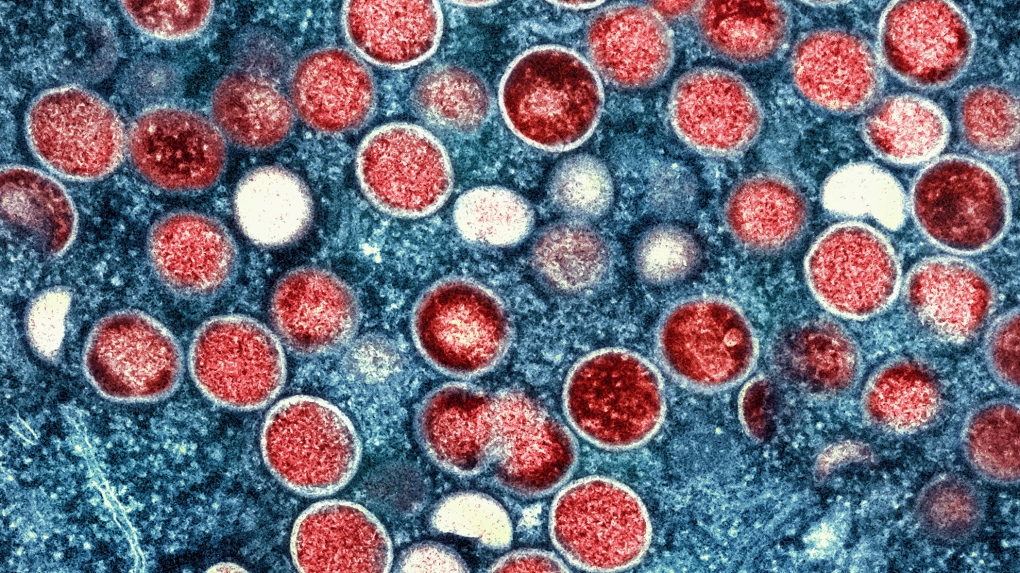 This image provided by the National Institute of Allergy and Infectious Diseases (NIAID) shows a colorized transmission electron micrograph of monkeypox particles (red) found within an infected cell (blue), cultured in the laboratory that was captured and color-enhanced at the NIAID Integrated Research Facility (IRF) in Fort Detrick, Md. (NIAID via AP)

New Brunswick is reporting its first confirmed case of Monkeypox in the province.

The provincial government’s Department of Health confirmed the case in a news release Friday evening.

According to Public Health, the individual who tested positive is currently in isolation and is being monitored by health officials. The province also says the person who contracted Monkeypox has not recently traveled outside of New Brunswick. Contact tracers for Public Health are now trying to determine the source of the infection, and identify and notify any close contacts.

“New Brunswickers should know that Monkeypox virus spreads by close contact with infected humans or animals and does not spread like COVID-19,” said Dr. Jennifer Russell, Chief Medical Officer of Health, in a news release. “The general public is not at a similar level of risk but should still be aware of how to reduce their personal risk.”

The release notes that Public Health is notified of any presumptive cases of Monkeypox, and cases are subsequently confirmed by the National Microbiology Laboratory in Winnipeg, Man.

New Brunswick Public Health says it will report any future confirmed cases through its website.

“The province is working closely with the Public Health Agency of Canada and associated partners to ensure that additional vaccines will be available,” the release reads. “Based on the available supply, the department’s current strategy is to offer the vaccine to close contacts of a case.”

Hurricane Ian left a path of destruction in southwest Florida, trapping people in flooded homes, damaging the roof of a hospital intensive care unit and knocking out power to 2 million people before aiming for the Atlantic Coast.

Canadians in Florida hunkering down as hurricane Ian lashes the state

Canadians in Florida are hunkering down as the massive Category 4 storm lashes the southwest coast with heavy winds and rain.

A fourth leak on the Nord Stream pipelines has been reported off southern Sweden, the Swedish news agency said Thursday.

The body of a famed U.S. extreme skier who went missing this week after falling from the world's eighth-highest mountain was recovered Wednesday and transported to Nepal's capital.

Ukrainian President Volodymyr Zelenskiy said he had called on Canada on Wednesday to lead an unprecedented drive to rid his country of landmines linked to Russia's seven-month-old invasion.