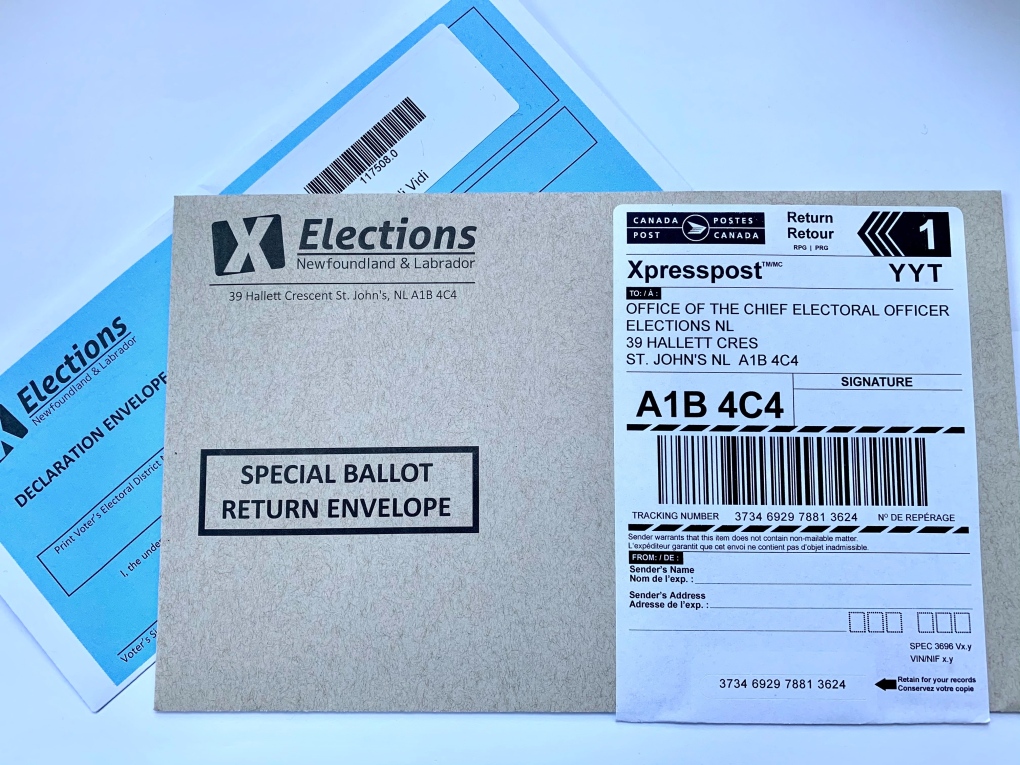 Newfoundland and Labrador's abrupt shift to a mail-in election in February led to more than 16,000 calls for help, several allegations of election violations and at least one plea for civility. THE CANADIAN PRESS/Sarah Smellie

ST. JOHN'S, N.L. -- Newfoundland and Labrador's abrupt shift to a mail-in election in February led to more than 16,000 calls for help, several allegations of election violations and at least one plea for civility.

"While I recognize that this process has taken longer than expected, it would be appreciated if candidates making complaints do so in a civil manner," chief electoral officer Bruce Chaulk wrote in a March 14 email to all political parties as vote counting was underway.

"My staff have worked extremely hard during this election, and the tone and manner of some complaints border on harassment and unparliamentary conduct."

The email was obtained after The Canadian Press requested all correspondence between party leaders and Elections Newfoundland and Labrador about the vote-counting process, as well as data about the number of calls from the public looking for help.

The correspondence shows Chaulk scrambling to build a system to count more than 120,000 mail-in ballots while balancing COVID-19 protocols and the parties' right to oversee the process.

It also shows the Progressive Conservatives were concerned about "batch sign-ups" of voters, wherein people who called Elections NL were allowed to register multiple voters without providing identification for them.

Meanwhile, 16,524 people phoned the voting information line to request a ballot or to ask if theirs was ever going to show up. There were so many calls, Elections Canada had to step in and take over the phone lines.

That was out of the ordinary for us to give support to the provincial election body," Matthew McKenna, an Elections Canada spokesman, said in an interview Tuesday.

But Newfoundland and Labrador's election was anything but ordinary.

Liberal Premier Andrew Furey called the election on Jan. 15, with voting set for Feb. 13. That plan unravelled as a COVID-19 outbreak swept through the St. John's region in early February. Poll workers resigned en masse, health officials put the province in lockdown and Chaulk finally announced on Feb. 12 that in-person voting was cancelled.

Following several deadline extensions to request and return a mail-in ballot, votes were ultimately due on March 25. Results announced March 27 gave the Liberals a thin majority, with 22 of the legislature's 40 seats.

At 48 per cent, the election saw the lowest voter turnout in the province's history, and results in three districts are now being contested in court.

Emails show voters were phoning right up until the March 25 deadline to ask when their ballot kits would arrive. An email from Elections Canada indicates the phone lines got 301 calls in the three days before the deadline, and 94 calls on the day ballots were due. The most frequent questions asked during those calls were about missing ballot kits; kits that had arrived with either no ballot, multiple ballots, no return envelope or incorrect information; and whether there was a place to drop off completed ballots.

From March 15 to March 21, there were 753 calls, asking the same types of questions. The 16,524 calls fielded in total by Elections Canada from Feb. 16 to March 26 represents over nine per cent of voters in the province. During the 2019 federal election, the Elections Canada information line took calls from 1.7 per cent of voters, according to numbers supplied by McKenna.

Behind the scenes, both the NDP and the Tories were growing increasingly concerned about the scrutineering process @to oversee the vote count, while the Tories demanded answers about alleged "batch" voter sign-ups.

"We have also become aware of batch sign-ups -- someone calling, and signing up multiple voters, without ID verification," Progressive Conservative campaign consultant Steve Kent wrote in a Feb. 19 email to Chaulk. "Is this actually being permitted?" He wrote to Chaulk again on Feb. 25, asking for a response.

Kent told The Canadian Press on Wednesday that he never received a response from Chaulk about that issue. Party secretary Rhonda McMeekin said the Tories asked about the batch sign-ups several times and received no response. "It remains unclear whether these batch sign-ups occurred or not," she said in an email Wednesday.

As for overseeing the count, Chaulk told the parties in early March they could have only one scrutineer on site who'd be required to work long hours and bring their own snacks.

But on March 5, he said he'd devised a plan using simultaneous Skype calls that would allow scrutineers to monitor the count remotely. That way each party could have several scrutineers and they could switch out and give each other breaks, he said.

But he insisted parties couldn't have it both ways: they could either have someone on site or use the video option. Ultimately, all three parties used an in-person scrutineer, Elections NL spokeswoman Adrienne King confirmed, and counting began on March 6.

On March 12 Kent wrote what he called a "formal objection" to the oversight process, alleging the party's scrutineer, Darrell Hynes, was forced to stand two metres from the ballots and that he could inspect only spoiled ballots.

"These decisions and actions have undermined his legal entitlement to do his work as a scrutineer," Kent wrote. "Further, they undermine the election process."

Chaulk wrote back to him that day, saying his team was doing its best under the public health restrictions. "If challenged in court we are prepared to defend our actions on these issues, " Chaulk wrote.

Kent responded: "These decisions continue to undermine the legitimacy of the election .... Knowing you are prepared for court doesn't solve the problem, either."

This report by The Canadian Press was first published May 19, 2021.