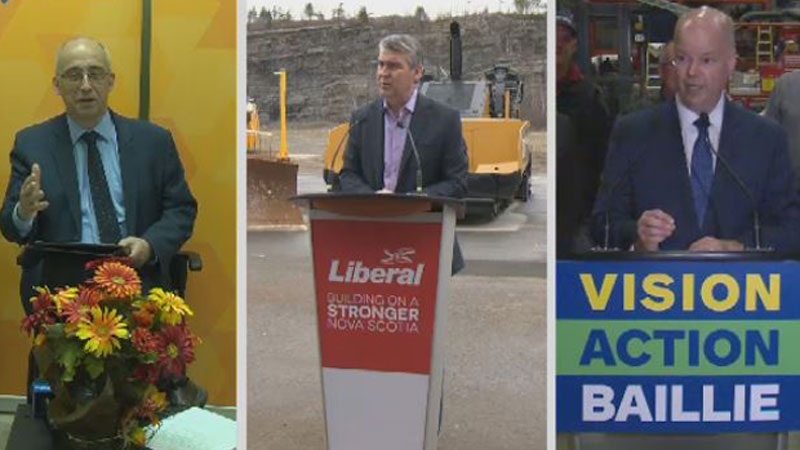 This early in an election campaign, very little is certain. But Nova Scotians can be sure of one outcome on May 30: the next premier of the province will be a middle-aged white man.

In fact, that was the focus of Baillie’s announcement Tuesday. Surrounded by female PC candidates, Baillie promised his government will encourage increased diversity by increasing the per-vote subsidy paid to parties by Elections Nova Scotia for candidates who are women, Indigenous or African-Nova Scotian. As of 2016, the per-vote rate is $1.65. Baillie says votes for diverse candidates will be increased by 50 per cent, “to incent political parties to do more to see that their candidates reflect today’s Nova Scotia.”

“This to me is one of the most progressive things a Progressive Conservative party can do,” Baillie said.

He also took shots at McNeil for comments the Liberal leader made to the media Monday. McNeil was asked to defend the fact that his party is running fewer women than the PCs or NDP.

“It’s one thing for parties to go out and identify people to run in ridings that they don’t think they have a great shot in, it’s quite another when you actually go out and elect people, so you get them elected,” McNeil said.

He went on to say his party has stood beside women to have them elected in “meaningful ridings.”

Tuesday, Baillie said the Liberal leader should apologize for suggesting some women are not running in meaningful ridings.

McNeil shot back, saying his party has elected more women than any other in Nova Scotia’s history, and that every riding is important.

“I have the great fortune of being able to appoint more women to the executive council than any other premier in the history of this province,” McNeil said. “I’ve changed the face of the judiciary. We’ve gendered it, but also it reflects who we are. I’m very proud of that. My own remark was that we need to get more women elected.”

MLAs Kelly Regan and Joanne Bernard were both at the Liberal campaign announcement Tuesday. When the legislature was dissolved, they were among the six women in the 17-member cabinet.

Neither McNeil nor Baillie would commit to ensuring that 50 per cent of their cabinet will be female.

For his part, NDP leader Gary Burrill says gender parity is “right in the DNA of the New Democratic Party,” and that there are funds set aside to help with special challenges faced by women running for office.

“The way our process of bringing candidates forward works, just organically and generically, addresses this matter. This is not a matter that I have ever had to address,” Burrill said. “We do not have a constituency association that would not very seriously look for candidates of diversity backgrounds and certainly have an eye toward women that could be potentially strong candidates.”

All three leaders highlighted the progress that has been made in recent years.

“Since I’ve been elected leader it has been one of my top priorities to elect new slates of candidates that reflect modern Nova Scotia,” Baillie said. “A third of our candidates today are female; that’s more than any time in our party’s history and more than the Liberals are running, quite frankly, in this election. I am proud of the progress we’ve made but I acknowledge there is more to do.”

There are 12 female Liberal candidates this year, out of a possible 51. There are 17 female PC candidates and the NDP says it will have 23 female candidates when all nominations are complete.

When the legislature was dissolved there were 15 women in the House of Assembly.