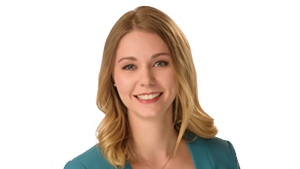 Sarah Ritchie is no longer with CTV Atlantic.

Sarah grew up in Wilcox, Sask., a village of about 300 people.

Her passion for writing motivated her to pursue a career in journalism. Sarah attended the University of Regina’s School of Journalism, graduating with distinction 2012.

Sarah originally intended on pursuing a career in print, but while completing a television internship in Edmonton she fell in love with the medium.

Her first job in the industry was with CTV Regina as a reporter and producer.

In 2013, Sarah headed east and took a job as a copy editor in New Brunswick. The following year, she was hired by CTV Atlantic to fill a temporary position as a videographer at the Sydney bureau.

In 2015, Sarah moved to the Halifax newsroom, where she proved her versatility working as a web writer, production assistant, reporter, anchor and weather presenter.

Sarah was hired as a full-time reporter covering Nova Scotia politics in March 2016.

Sarah says she misses the prairie skies, but loves exploring the beautiful seacoast of her adopted home.