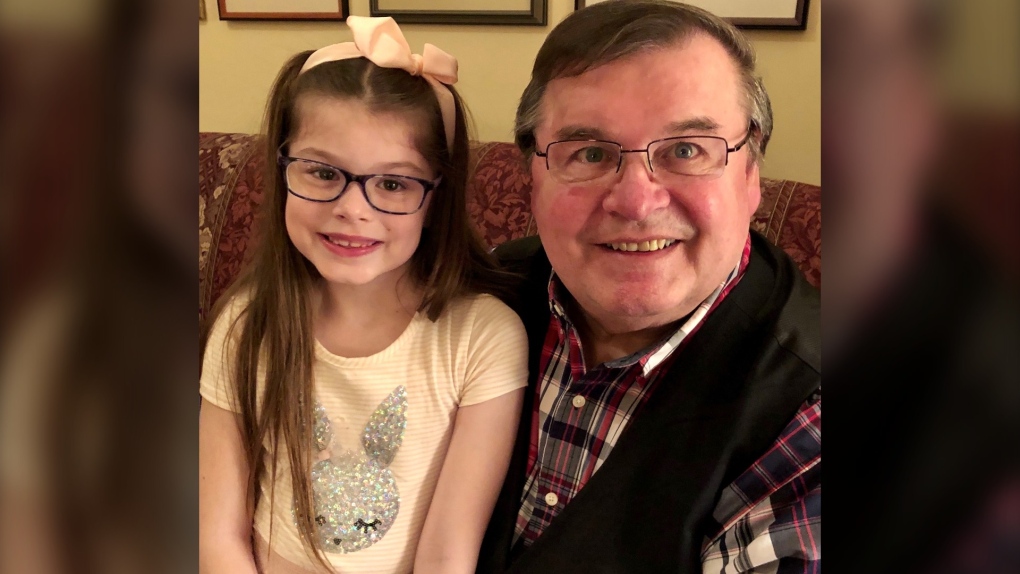 Lorne Rostotski and his granddaughter, 7-year-old Asha Vincent, pose in this undated handout photo. Lorne Rostotski of St. Johnâ€™s, N.L. hugged his granddaughter, 7-year-old Asha Vincent, for the first time in weeks on Thursday. Newfoundland and Labrador health officials announced that residents can expand their circle to include one other household this week as the rate of new COVID-19 diagnoses slows. is seen in this undated handout photo. THE CANADIAN PRESS/HO, Sara Rostotski *MANDATORY CREDIT*

ST. JOHN'S, N.L. -- ST. JOHN'S, N.L. -- Images of grandparents hugging their grandkids for the first time in weeks flooded social media this week after officials in Newfoundland and Labrador announced that residents can expand their circle to include one other household.

Lorne Rostotski, who used to spend time with his granddaughters Aydan and Asha almost every day, had been making do with visits through windows and from a distance outdoors.

On Thursday, when the two-household policy was announced, he rushed over to his daughter's place, where Asha was waiting for him on the front step. After a thorough handwashing, the two girls raced each other for the first hug with their grandfather.

"It was just a pure love-fest," Rostotski recalled in a telephone interview from his St. John's home Saturday. "We haven't stopped hugging and kissing since."

The so-called "double bubble" policy, which follows a similar approach announced in New Brunswick last week, is aimed at minimizing social isolation as the COVID-19 pandemic and related public health measures wear on.

But along with happy reunions, the newfound freedom to mingle has become a minefield of potential for hurt feelings and household tension, as families and roommates are forced to choose just one set of companions for the foreseeable future.

Reached by phone, Letson said there's a kernel of truth behind his joke as people work through the anxiety and emotional pressure of picking one relative or friend to meet up with.

"I do think that there's a real possibility of ... lasting emotional damage, if there are people who find themselves (outside) of a bubble that they think they should be in," Letson said.

Letson, who does not practise family law, said he's heard of situations in which families have gotten competitive and raced their siblings to the grandparents' door, "in one case texting (their) brother, 'You snooze, you lose."'

Ultimately, he said people should be open-minded and forgiving about tough decisions being made over who to spend time with during the pandemic.

The civil lawyer said it's a sticky issue that's easier to process from the perspective of what's best for the community, rather than thinking about an individual's rights to see their loved ones.

Dr. Jennifer Russell, chief medical officer of health in New Brunswick, warned those looking for loopholes Friday that they do so at their own risk, while reminding people that the circle has to be limited to just one other household.

"I understand that this requires hard choices -- particularly for grandparents that want to be with their grandchildren -- but I'm asking you for your continued patience and adherence to public health advice," Russell said.

A day after the policy was announced, Newfoundland and Labrador Health Minister John Haggie acknowledged the discussions sparked by the "double bubble" proposal.

"At the end of the day, it is not possible for my department to ... regulate or arbitrate every possible scenario," Haggie said.

Some families have decided against double-bubbling to avoid hurting feelings and creating tension. Others, such as health-care workers and those at risk of complications from COVID-19, have rejected the enticing option of seeing loved ones in order to protect their health.

Megan Sullivan-Cummings of St. John's said it was tough to say no to offers of doubling up, but she decided it wasn't a good idea to expand her family's circle because of health risks within the household.

"My children have asked numerous times, and I feel so bad about not letting them. But you have to do whatever you can to keep safe," Sullivan-Cummings said in a message.

For people living with roommates, meanwhile, the "bubble" conversation popped up earlier, out of necessity, in households where groups of adults with different families, jobs and relationships must coexist.

"It's definitely not an easy conversation and certainly not one that I think is possible for a lot of people," said one St. John's woman, who asked not to use her name out of concern for public harassment.

She and her roommates get along, she said, but there were some tense moments about people's social decisions that she let go to avoid rocking the boat.

Most roommates in her friend group had already decided to expand their bubbles to include significant others, she said, so Thursday's announcement seemed to apply more to traditional families.

"It would be nice to just see some kind of acknowledgment from the people who are putting out these mandates, or examples of how you how you could make this work ... other than just the idea of one family under one roof and no one else," she said.

Prince Edward Island, where 24 of the province's COVID-19 cases have recovered, has taken a different approach, instead allowing people to meet outdoors in interchangeable groups of up to five.

"We feel that there's more flexibility to interact with people in order to meet your social, personal and mental health needs by having an ability to be more flexible," said Dr. Heather Morrison, the province's chief medical officer of health.

"You're not forced to prioritize a certain family member or another household of friends. I appreciate those would be difficult decisions."

For Rostotski and his wife Jill, it was a no-brainer to double-bubble with their only daughter, her husband and their kids, though there are other relatives they're eager to see at some point.

He said he's proud of his young granddaughters' patience and understanding about the health risks that come with physical contact during the pandemic -- and said the close family got through their time apart knowing it would soon pass.

This report by The Canadian Press was first published May 2, 2020.

Another wave of coronavirus will likely hit the U.S. in the fall

Largest cargo plane touches down with COVID-19 supplies in Quebec

Spaniards race out for first open-air exercise since mid-March