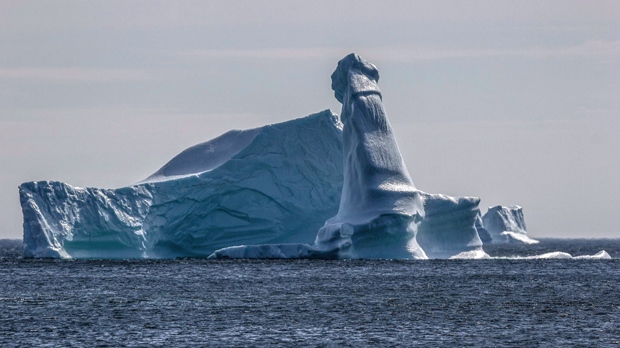 An iceberg is seen near L'Anse aux Meadows, Newfoundland in this undated handout photo. THE CANADIAN PRESS/HO, Jamie Ellison

ST. JOHN'S, N.L. -- It was the year of the celebrity iceberg, the phallic iceberg and the lying-dog iceberg.

More than a thousand icebergs drifted into East Coast shipping lanes this year, with many more closer to shore in Newfoundland and Labrador.

The arrival of September signals the end of iceberg season, which wasn't the biggest on record but may have been the most-watched thanks to Twitter, Facebook and Instagram.

Social media has proven a perfect vehicle for the proliferation of iceberg selfies and spectacular shots of icebergs dwarfing homes in seaside villages.

"I found this year that icebergs were more popular than whale season -- I'm still getting calls from people looking to see if there are icebergs here," Currie said. "A lot of interest in icebergs -- people really love to see them."

Gabrielle McGrath, commander of the U.S. Coast Guard's International Ice Patrol, told The Canadian Press this week they have counted 1,004 icebergs in the shipping lanes this year, but few more are expected.

"Those numbers do not include icebergs off of the Newfoundland coast. This number only captures the ones that actually drifted into the shipping lanes, not all of those that were detected or tracked," she said in an email.

The International Ice Patrol was formed after an iceberg sank the Titanic in 1912. It works with Canadian partners to track conditions, including using surveillance flights, and update mariners.

"The most severe season on record was in 1984 when 2,202 icebergs entered the shipping lanes," McGrath said.

In April, an iceberg squatted off tiny Ferryland, N.L., where its size, beauty and proximity drew crowds and put the town of about 500 on the world's radar.

News of the frozen spectacle rippled through global media including The New York Times, CNN, BBC, Time, The Guardian and Russia's state-backed news channel, as well as outlets based in Australia, Japan and Germany.

One headline in the U.K.-based Independent made clear its fame: "How to Visit the Ferryland Iceberg."

In July, Currie watched as a giant iceberg grounded in 120 metres of water off Bonavista, prompting more headlines.

"It was melting, and pieces were breaking off every day. Every time we go out there we'd see pieces breaking off of it," he told The Canadian Press.

He said there were a lot more icebergs this year in his area, and he hosted guests from as far away as Japan, China and Dubai who couldn't get enough of the 12,000-year-old ice specimens originating from Greenland glaciers.

In late July, a phallic-shaped iceberg was photographed off Griquet, N.L. A photographer who captured a shot of it, Jamie Ellison, said it was several storeys high.

"Mother Nature expresses herself in an interesting manner sometimes," he said at the time.

-- By Rob Roberts in Halifax