Ending the stigma: Young amputees gather in Fredericton to share their stories 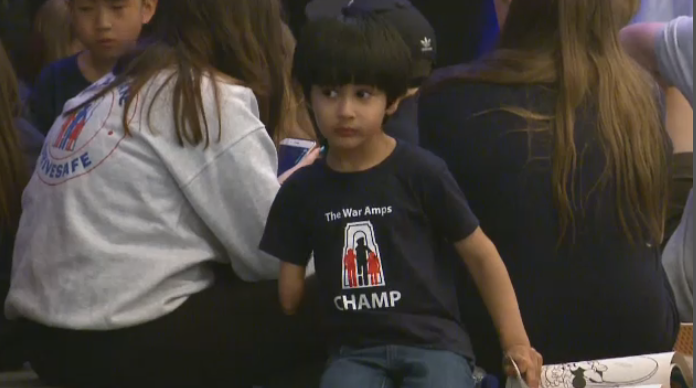 Young amputees from across the Maritimes are gathering in Fredericton this weekend for this year's Child Amputee Seminar - and one of the topics of discussions is, "how to deal with the staring - and questions that come with being an amputee."

Zakk McDonald, how was born without a hand, isn't shy about his amputation.

“Well, this floppy thing is a stump,” says McDonald, showing his myoelectric arm. “This is connected directly to the elbow, this is more than an arm than it is a hand, this is right at the elbow joint."

The 12-year-old is willing to teach anyone and everyone about it.

“I do catch other kids staring at it, but generally when I’m in public around other people I don't just go up and explain in case that comes off as arrogant or something, in case they weren't actually staring at it. So I never actually do that, but if they ask I’m more than happy to answer.

But at this weekend’s seminar - he doesn't have to. The Delta Fredericton is full of other kids and adults - all of them missing limbs. This year’s theme is focusing on acceptance, and overcoming the obstacles, both physical and emotional, of an amputation.

Jemma Trowsdale, a 15-year-old from Summerside, councils other children to own their amputations.

“When I was eight-years-old I had cancer in my upper leg and it spread to my knee, so the doctors decided to do a rotationplasty surgery.”

She says sometimes people do stare, or ask a lot of questions.

“There was this one incident and this girl, she kept asking me, over and over and over again, ‘what happened to your leg?’ So the first time I explained the whole thing. And then I kept explaining the whole thing and she was like, ‘well this is getting boring,’ so then I finally say, ' a shark bit it off!’”

“We might want to hide our artificial limbs because people might stare or people might have questions,” says Warm Amps Public Awareness Officer James Jordan. “But it's about owning who you are. And being proud of yourself, and that's what we teach the kids here.”

Like McDonald, Jordan also uses a myoelectric arm - only made possible by the War Amps.

“It's about $25,000, so it's a lot of money, and that's what we do here, we give amputees across Canada, and right here in New Brunswick, funding for artificial limbs,” says Jordan.

The staff at War Amps say there's little to no funding in Newfoundland and Labrador and Prince Edward Island. There's partial funding in Nova Scotia, and in New Brunswick there's some available for those in low-income situations.