N.S. athlete with partial limbs inspires in video: 'There are things I can do' 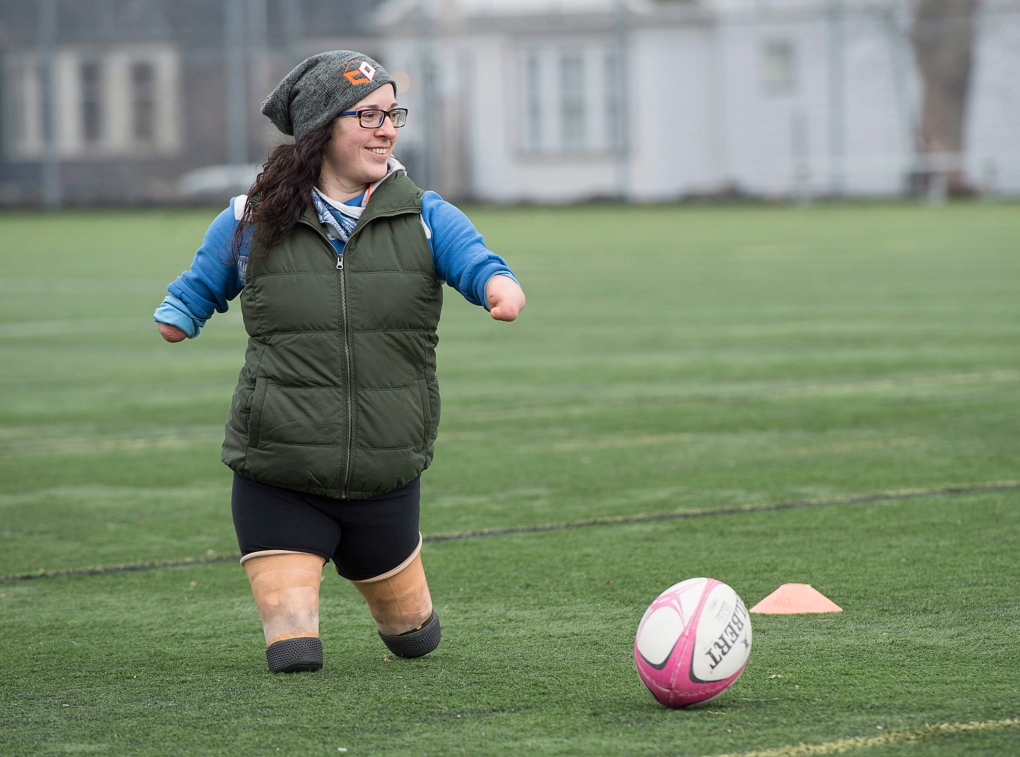 Lindsay Hilton, who was born without full arms and legs, coaches rugby at Dalhousie University in Halifax on March 28, 2016. (Andrew Vaughan / The Canadian Press)

HALIFAX -- A rugby player without full limbs has become an inspiration to others across the country, after a viral video depicting her doing crossfit workouts with multiple pullups and lunging across a gym floor with a 16-kilogram weight.

Lindsay Hilton allowed the CrossFit OnSide gym in Halifax to put the video on Facebook on March 9, and within a few hours it had six million viewers.

The video shows the 30-year-old rugby player and coach striding across the gym with a bar on her shoulders, throwing her body to the ground for a series of burpees, and using homemade prosthetics with hooks to pound out a series of pullups.

Her video was shot originally as a way to critique her crossfit techniques, but Hilton has been surprised by how it is inspiring amputees and people who use prosthetics to head to local gymnasiums worldwide.

"The best reaction I've gotten is that a few people I know that are missing limbs have contacted me and said, 'This is really neat that you can do this, can you give me some more information?"' the 30-year-old said during a telephone interview.

"I like the fact that it's out there so that other people who don't think they can do exercise can see that they can."

Blaike Holding, a 27-year-old office administrator from Abbotsford, B.C., whose limbs were amputated at the age of five, says the video has motivated her to head to a local fitness centre.

"I've always avoided going to the gym because ... I've never had anyone else know how to help me out. So I've avoided it."

"Seeing her do the crossfit and some of her yoga videos have made me realize there are things I can do."

Holding said strengthening exercises can be particularly helpful to amputees, as they have to use far more energy than a person with full limbs to walk or run.

She also said improving muscle tone and keeping weight under control helps with overall health and mobility, and can avoid having to acquire new prosthetics due to weight gain.

However, she will need to adapt the workout to her own body and limbs.

"I know my boundaries and limits. ... Some younger amputees should get checked (by a doctor) a bit first," she said.

Karen Valley, the director of the national amputee centre with the War Amps, a Canadian organization that supports people with missing limbs, said in a telephone interview that there are about 23,000 people who are missing limbs or parts of limbs registered with her group.

She said the video is relevant to any Canadian looking to push their fitness boundaries, but amputees may be particularly inspired.

Valley, an amputee herself, said she's also going to head to a gym with the video reference in hand.

She also said she hopes that amputees don't directly compare their fitness levels with the video, or set unrealistic expectations for their own athletic performance.

"It definitely could be a concern for someone who might look at it and finds it depressing or (feel) I'll never be able to do that," she said.

"But she (Hilton) really portrays that positive attitude and encourages others to be positive."

Jenny Jeffery, the co-owner of CrossFit OnSide, said Hilton gained her first month's membership in September at the gym through a burpee contest after a rugby game.

"Every since then it's been trial and error. ... She went to Canadian Tire and got some chains and then some velcro straps and said, 'Why don't we try this?"' said the trainer.

She said she and Hilton worked together to adapt prosthetics to allow the athlete to do pullups, rowing and other exercises.

Hilton says she sees the video as just a natural extension of living her life fully, an attitude her parents and friends have encouraged throughout her childhood.

"I was born missing my limbs ... and I never really thought that was holding me back," she said.