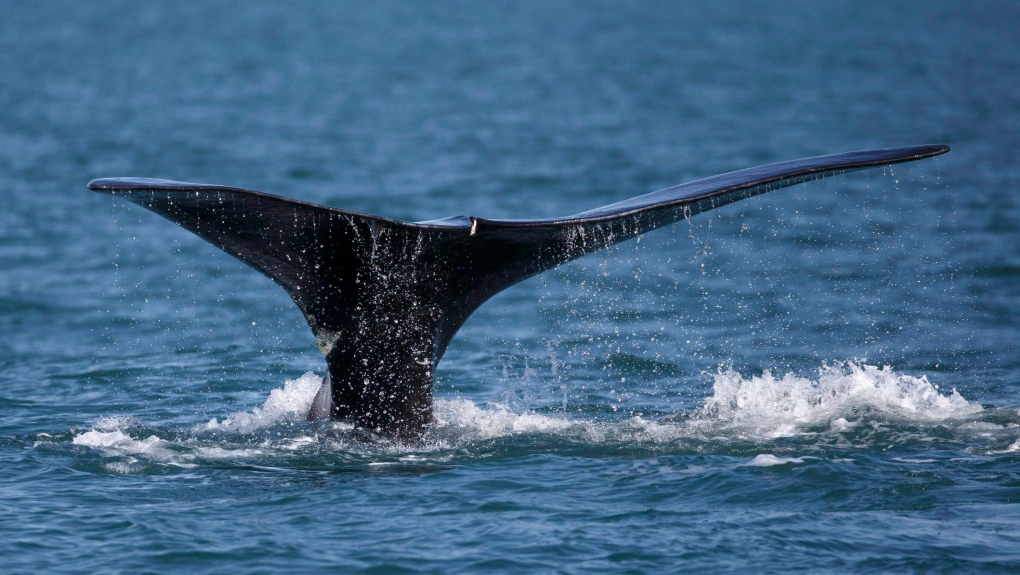 In this Wednesday March 28, 2018 photo, a North Atlantic right whale feeds on the surface of Cape Cod bay off the coast of Plymouth, Mass. THE CANADIAN PRESS/AP-Michael Dwyer
GASPE, Que. -

Fisheries and Oceans Canada is searching for an endangered North Atlantic right whale that was spotted Thursday entangled in some kind of gear east of Gaspe, Que.

The whale is a 14-year-old female known as Sundog.

Federal officials say marine mammal rescue agencies are on standby, though a disentanglement mission won't be attempted unless sea conditions are favourable.

It remains unclear what kind of gear needs to be cut away or where it came from.

There are about 336 North Atlantic right whales in existence, and many spend their summers feeding in the Gulf of St. Lawrence.

Fifteen calves were observed earlier this year in waters off the United States.

The first right whale spotted entering Canadian waters this season was seen on May 4 by the crew aboard a surveillance aircraft as it flew over the gulf, north of Iles-de-la-Madeleine, Que.

The sighting triggered a 15-day fishing closure in specific fishing grids in the southern Gulf of St. Lawrence.

This report by The Canadian Press was first published May 20, 2022.

The campaign for Patrick Brown said it was consulting its legal team after the leadership election organizing committee of the federal Conservatives voted to disqualify him from the race late Tuesday.