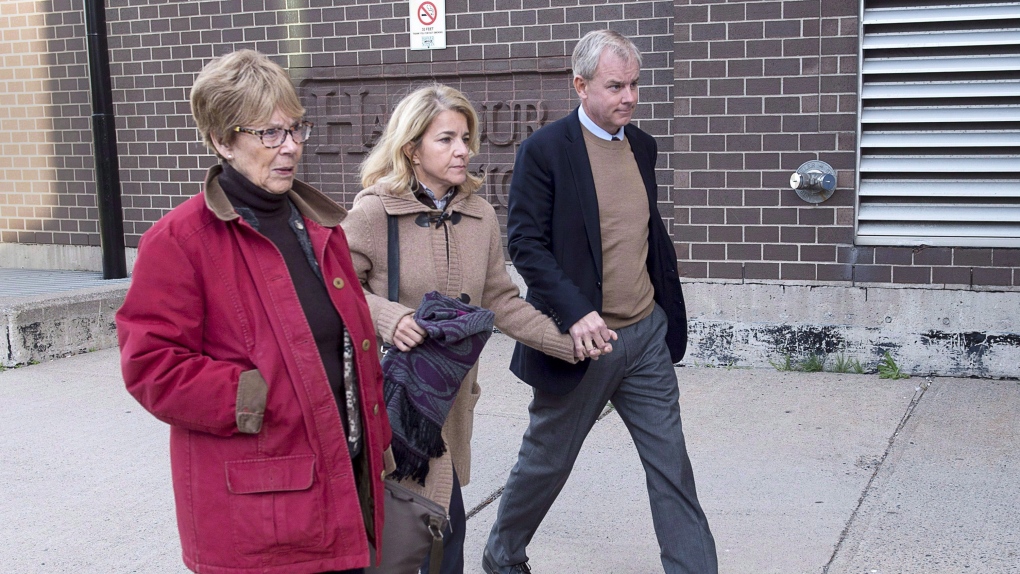 Dennis Oland, right, his wife Lisa and mother Connie, left, arrive at Harbour Station arena in Saint John, N.B., on Monday, Oct. 15, 2018 for jury selection in the retrial in the bludgeoning death of his millionaire father, Richard Oland. (THE CANADIAN PRESS/Andrew Vaughan)

SAINT JOHN, N.B. -- The family of both murder victim Richard Oland and his accused killer, Dennis Oland, say they are steadfast in their support for Dennis as he faces retrial in his father's murder.

Evidence will begin to be presented on Tuesday now that a jury is in place for Dennis Oland's trial, which is estimated to take at least four months.

Oland has been free on bail while awaiting the retrial.

He attended the jury selection last week in the Saint John law courts as did members of his family, notably his mother and Richard's widow, Connie; his wife Lisa, and often his uncle, Derek Oland, the executive chairman of Moosehead Breweries Ltd. and brother of Richard.

In a statement released Monday, the Oland family says they are confident Dennis will be cleared.

"We wish to restate our steadfast support for Dennis and our faith that the judicial process will prove his innocence," the family said.

Signed by Connie, Lisa, Derek and his wife Jacqueline, "and family," the statement says the Olands - one of the most prominent business clans in the Maritimes - have "endured an unimaginable ordeal since Dick's death in 2011."

Dennis Oland originally stood trial in 2015 for the second degree murder of his father. But the verdict in that trial was overturned on appeal in 2016 and a new trial ordered.

Richard Oland was a former executive at Moosehead, Canada's oldest independent brewery, until he had a falling out over control of the family-owned business and left in the early 1980s. A multimillionaire, he founded several businesses including an investment firm called the Far End Corporation.

It was in the offices of that corporation on Canterbury Street in Saint John's historic uptown that Oland's body was discovered on the morning of July 7, 2011. The businessman and avid sailor was found lying in a pool of blood by his desk. He had been beaten to death.

After almost two years of investigation, Dennis Oland was charged in 2013.

He has always maintained his innocence, supported by his family.

"During this time our faith in Dennis' innocence has never wavered," they said in Monday's statement.

"We also wish to thank the innumerable friends and strangers who have expressed to us their unfailing belief in Dennis' innocence. We cannot adequately express how much this continuing support means to us."