Former bunker allows you to travel to 1969, and a world on verge of war 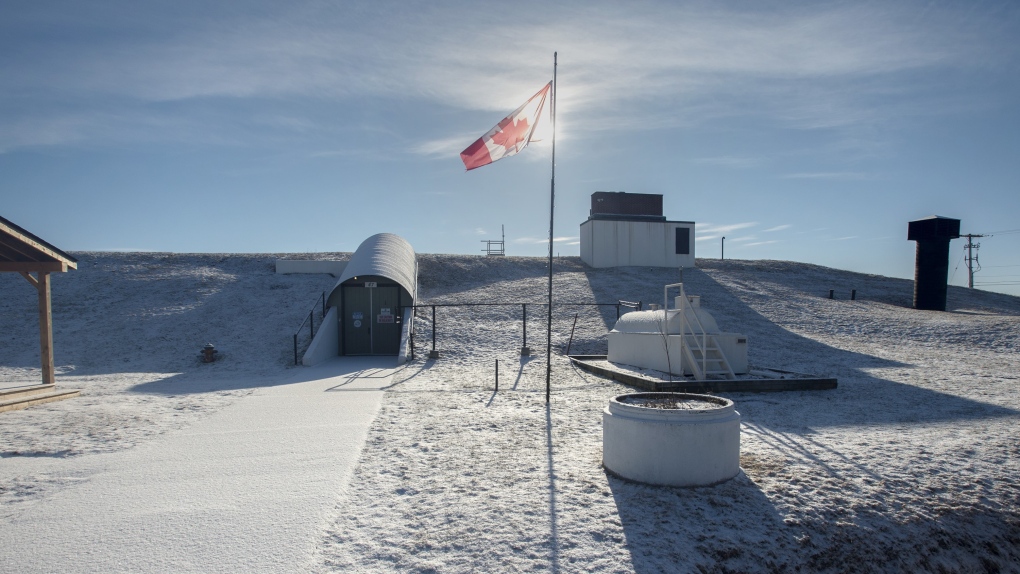 The entrance to a decommissioned nuclear fallout shelter, commonly called a "Diefenbunker", in the rural community of Debert, N.S., is seen on Saturday, Jan. 26, 2019. Enter the Bunker, the company transforming the two-storey, 64,000-square-foot underground complex into an entertainment venue, plans to offer state-of-the-art laser tag, movie nights and paintball tournaments. (THE CANADIAN PRESS/Andrew Vaughan)

DEBERT, N.S. -- Imagine the unthinkable: the United States and the Soviet Union are at war. Nuclear missiles are hurtling toward their designated targets with deadly accuracy.

Within the hour, cities will be vaporized and millions will be annihilated -- unless you act fast to stop it all.

That is the premise behind an escape room game now being developed inside a decommissioned nuclear fallout shelter -- better known as a Diefenbunker -- an hour's drive north of Halifax in the sleepy, rural community of Debert.

"The idea is that ... the bombs are in the air," says Tyler Fields, event manager for Enter the Bunker, the company transforming the two-storey, 64,000-square-foot underground complex into a cutting-edge entertainment venue.

"It's a matter of which nation can get their self-defence system up and running to save the nation ... We'll get you immersed in the experience."

Commissioned in 1959 by then-prime minister John Diefenbaker, the bunker was one of seven Cold War bomb shelters built across Canada. Each was designed to withstand a five-megaton nuclear blast from about two kilometres away.

"A lot of work has been put into the bunker," Fields says after completing a public tour of the Debert facility. "We're on the tail-end of the construction phase ... We have all kinds of space and lots of ideas."

Until late last year, public events at the historic bunker were generally low-key and somewhat sporadic.

But Fields is gearing up for a busy season with state-of-the-art laser tag, movie nights and paintball tournaments.

And plans are in the works to establish the site as an e-gaming arena, where participants can watch and compete in video game tournaments.

The new "War Games" escape rooms are slated to open in March.

The rules are simple: Two teams -- one representing the U.S.S.R., the other the U.S.A. -- will be briefed inside the bunker before they enter a room, where they will have an hour to avert Armageddon by decoding clues and solving puzzles.

The Cold War theme will be hard to miss.

At the height of the Cold War, there was enough food and water on hand to support 350 people -- including the premier and the lieutenant-governor -- for up to 90 days.

The goal was to protect government, military and justice officials to ensure "continuity of government" in the event of a nuclear strike.

"The challenge for Canada during the Cold War was largely one of geography -- our airspace was the most convenient route by which the Soviet Union could attack the United States," said Andrew Burtch, post-1945 historian at the Canadian War Museum in Ottawa.

"Our airspace would be a battle space in a Third World War, so a variety of active defence measures were enacted."

After the bunkers were decommissioned in the 1990s, the sites in British Columbia and Manitoba were sealed off.

The bunker in Alberta was sold to local business people, but it was repurchased and demolished by the province in 2001 after bids for the property were submitted by the Hells Angels, a group of white supremacists and a car-smuggling ring.

The status of the regional bunkers in Quebec and Ontario remain unclear, though they are part of active military bases.

A much larger Diefenbunker was built about 35 kilometres west of Ottawa in Carp, Ont.

The four-storey, 100,000-square-foot Central Emergency Government Headquarters was designed to house twice as many people as the regional bunkers, with enough room for 535 men and women -- among them the governor general, prime minister and senior cabinet members.

If nuclear weapons were launched, no family members were permitted inside any of the bunkers.

A national historic site, the Carp bunker has been a museum since 1998. Billed as Canada's Cold War Museum, it also features what is described as the world's largest escape room.

"These are important artifacts of the Cold War," says Burtch, who is also a history professor at Carleton University in Ottawa.

"Even events like laser tag expose people to this architecture of Armageddon that has been around since the 1950s ... It's good that these are being preserved for people to know the risks that we faced then and, of course, still do face."

After the Debert bunker was decommissioned in 1997, a local development group opened it to public tours.

In 2009, an American entrepreneur bought the site and started offering clients secure data storage -- until the business petered out a few years later.

In late 2012, entrepreneur Jonathan Baha'i purchased the site for $31,000 in a tax sale and established Data Security Node Inc. Dedicated computer servers are locked away in a climate-controlled area that was once used by the military to communicate with NATO and Norad.

The rest of the bunker sat idle until 2013, when Baha'i staged his first public event: Debert Doomsday. The fundraiser had participants dodging zombies while trying to deactivate a doomsday device.

All events, including laser tag, movies and the escape rooms will be posted on the bunker's website.