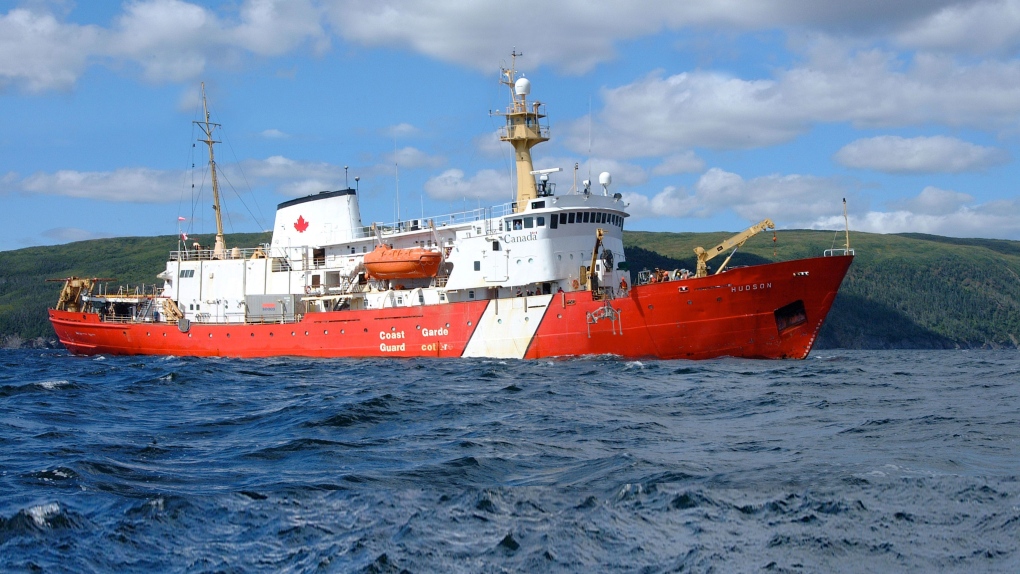 The Canadian Coast Guard said goodbye to a storied research vessel on Thursday, as Ottawa looks for temporary replacements to carry out the science projects the ship has hosted for the past 59 years.

The Hudson, built in Saint John, N.B., by Irving's Saint John Shipbuilding, was constructed out of ice-hardened steel and has been used to carry out oceanographic studies since 1963.

"It's sad to let her go, but we're making the best out of it and are recognizing the crew and all their achievements," said Commissioner Mario Pelletier, who is overseeing the renewal of the coast guard's fleet.

Bosko Loncarevic, a retired geophysicist who was aboard the vessel for 25 journeys, looked on fondly as a flag on the bow descended during the "lowering of the jack," and the ship's bell sounded for the last time.

The 91-year-old remembered the ship possessed a centre of gravity that allowed her to weather even the harshest of storms. "The result was she was the most stable ship in the world. You could be in 80-knot winds and she didn't even move or roll. She just sat there like a duck," he said during an interview.

As the Hudson carried out its trips, federal and university scientists studied subjects ranging from the prevalence of seabirds to the geology on the ocean's floor.

"My main interest was in the mid-Atlantic ridge," recalled Loncarevic. "The 1960s was the time when plate tectonics was finally accepted as a working hypothesis for how the Earth works, and one of the keys was a large ridge of undersea mountains."

Ellen Kenchington, a benthic ecologist at the Bedford Institute of Oceanography in Dartmouth, N.S., said the Hudson helped researchers define a marine protected area off Nova Scotia referred to as The Gully a decade ago.

"She (the Hudson) held us stable, letting us do our work and carry out a pioneer moment in science," she said.

Carina Gjerdrum, a seabird biologist with the Canadian Wildlife Service, met her husband, Adam Hartling, an instrument technician, during a 2005 trip to the Labrador Sea. They came Thursday to bid farewell and pose for a final photo alongside the bow.

Gjerdrum said the science on board has a lineage, with records on seabird abundance and distribution spanning two generations of researchers.

"It's really the birds that can tell us what's going on underneath (the sea). If the birds aren't doing well, then there's something wrong with their prey base or something else that isn't meeting their needs," she said.

The ship tied up in January as parts wore out and it was determined repairs weren't feasible, leaving Canada without a dedicated research ship to explore the oceans.

Work on the offshore oceanographic science vessel that will replace the Hudson has been delayed, with Ottawa now saying it is expected to be complete in 2025, Pelletier told journalists after the ceremony. He estimated the project will cost at least $968 million.

Ottawa recently sent out a request for proposals for private science ships to fill the gap as the preparations of the Hudson's replacement continue, he said.

He said the private charters will be for "five to seven years" to allow time to deal with any issues that may arise in the next ship's operations.

"The Hudson had some specialized equipment and not every vessel around the world has that equipment .... It's going to require a mixture of (replacement) ships over the years," he said.

Pelletier said the ship's usable equipment will be removed in the months to come, and a contract will be tendered to have it dismantled.

But on Thursday, most were looking back, rather than to the future, as the Hudson's achievements were noted.

The Hudson was the first vessel to circumnavigate North and South America, a voyage known as the "Hudson 70 expedition," requiring almost a full year, beginning in 1969 and ending in October 1970.

In March 1976, the Hudson rescued the entire crew of the fishery patrol vessel Cape Freels, which caught fire and was abandoned on the Grand Banks of Newfoundland and Labrador.

Loncarevic recalled the first civilian passage through the Northwest Passage from west to east, as the crew gathered at 3 a.m. to mark the trip's completion. "We were exhilarated," he said.

This report by The Canadian Press was first published July 7, 2022.