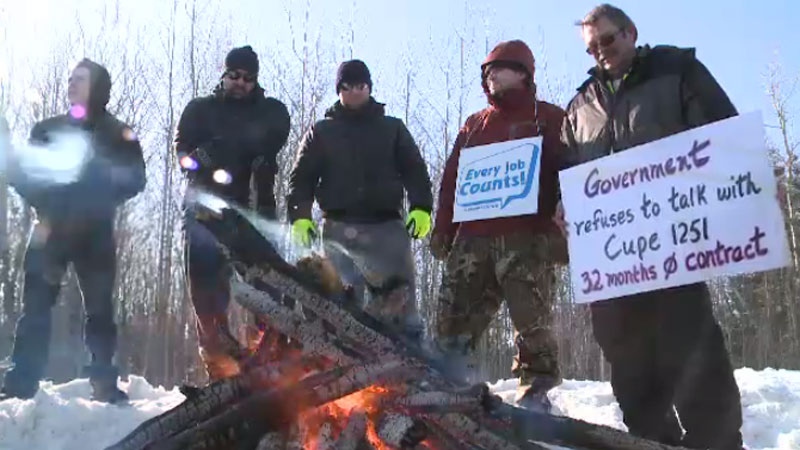 Correctional officers in New Brunswick have been without a contract for almost three years and say the province is trying to force them into a strike situation. (CTV Atlantic)

Correctional officers staged a rally outside the Southeast Regional Correctional Centre in Shediac, N.B. on Tuesday to voice their frustrations.

The officers have been without a contract for almost three years and say the province is trying to force them into a strike situation.

“We’re not getting anywhere with the people at the negotiating table,” says provincial CUPE president Everett Godfrey. “We’re trying to get them to understand what the issues are.”

The union represents cooks, guards and custodians. Casual workers are the main sticking point in the contract dispute.

A few years ago, CUPE won a court battle that protected casual workers by bringing them into the union. It was signed by both sides but CUPE says the province wants that clause erased.

“It wouldn’t be very appropriate for me to get into negotiations right now,” says New Brunswick Human Resources Minister Robert Trevors.

“There’s a number of issues on the table and I feel very confident we’ll get them settled.”

The union wants the province to recognize correctional officers as essential workers, but says the province is more intent on forcing them into a strike than negotiating a new deal.

“There’s a certain protocol that needs to be adhered to, to make sure that essential services are covered,” says Trevors.

The correctional officers are also raising concerns about the dangers they say they face on a daily basis.

“We deal with violence, threats of harm against officers and our families, we deal with contraband weapons, we deal with riots, uproars and disputes,” says local CUPE president Cindy Welling.

Negotiations were held last month. The two sides are planning to return to the table next week. A conciliator has been appointed to help the talks move forward.