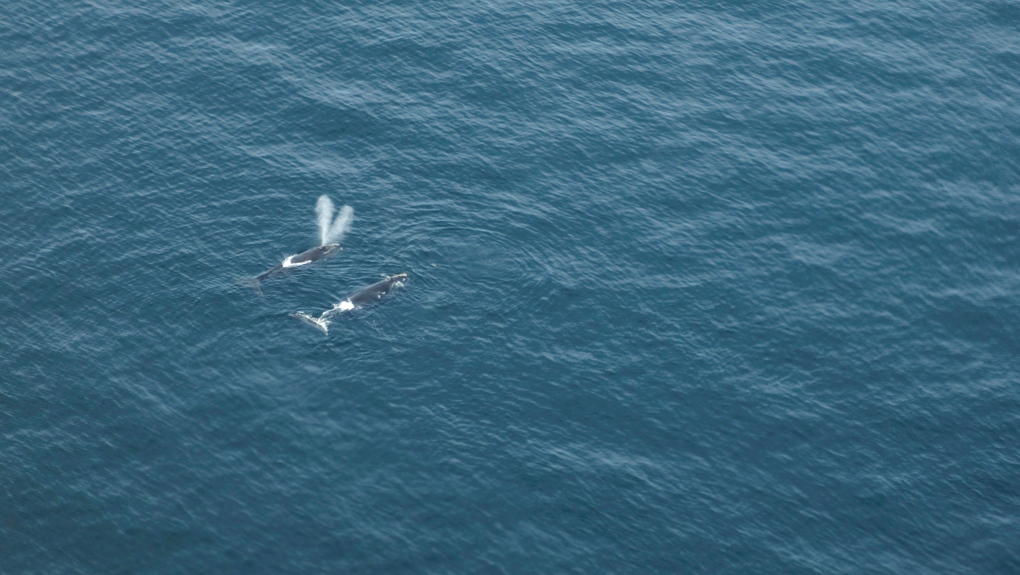 Right whales are seen in the south Gulf of Saint Lawrence in this May 5, 2018 handout photo. (THE CANADIAN PRESS/HO - Fisheries and Oceans Canada, Conservation and Protection Branch)

The Department of Fisheries and Oceans (DFO) says it considered the proposal by the Maritime Fishermen's Union and the Pecheurs professionnels du Sud de la Gaspesie, but will not exempt waters of up to 10 fathoms -- or 18 metres -- in depth.

"We felt staying in that depth of water, which is where most of our fishermen are now at this time of year anyways, was a really good compromise," said Carl Allen, president of the Maritime Fishermen's Union.

Last week, DFO issued temporary closures to six more grid areas due to the presence of right whales. The move came after six areas were closed to several fisheries as of May 22.

A static closure zone is in place along New Brunswick's northern coast until June 30, while DFO has been enforcing what are called dynamic management closures that shut down fishing activities for 15 days once a right whale sighting is confirmed.

In an interview Monday, Allen said fishermen are having a hard time understanding DFO's logic after they were willing to comply with any number of measures, including the use of tracking technology and observers.

"The idea that if a whale slides into a certain quadrant and then they are going to shut the fishery right down to zero feet of water ... is somewhat unacceptable. It's hard to understand the logic behind it," said Allen.

He said fishermen know of no instances where right whales ventured into shallower waters of the Gulf at depths from 18 to 36 metres.

But Amy Knowlton, a right whale research scientist with the New England Aquarium, said that's not strictly the case.

Knowlton has studied the huge marine mammal's migratory patterns along the eastern North America, including in the Bay of Fundy and the Gulf of St. Lawrence.

"We see whales very close to shore in various parts of the East Coast and up in the Gulf, she said.

Knowlton said the whales have been known to feed close to shore and could go through shallower waters when migrating.

"When you have such a high density of right whales up there now, it's not to say that they would never go into these shallow waters. I think the food might be in the deeper waters, but they could also be meandering around looking for patches or migrating to their next area of food."

As things stand, Allen said the series of ongoing closures could cost lobster fishermen about 25 per cent of their income. The lobster and snow crab fisheries are scheduled to end in the Gulf of St. Lawrence at the end of this month.

Allen's organization represents 1,250 lobster fishermen in New Brunswick and Nova Scotia -- about 600 members fish in regions of the Gulf.

"The Acadian Peninsula is already hurting this year because they have lost a lot of crab due to the fact boats are landing crab elsewhere because of the static closure," he said. "The lobster fishery was going to be the one to fill that void."

In a news release issued late Friday explaining its decision, DFO said the closures are the most effective way to protect right whales from entanglements in fishing gear. It said the department is acting on the "best science information available."

"These measures are about more than protecting these whales, and in doing so they are also protecting the long-term economic well-being of our coastal communities. The world is watching how we're handling this issue and we are mindful of the potential impacts to trade that depend on our choices."

Allen said lobster fishermen aren't without some sympathy for that point of view.

"We all hope that lobster won't get caught up in a trade war, he said. "I just think they could have come up with a better plan. An exemption into 60 feet of water is not going to harm these whales."

Allen said although his organization's membership has been willing to co-operate with the measures so far, there may come a point where they say they've "had enough."

"You can only be put in a corner so long ... before you decide you are just going to push your way out," he said. "But I really don't know how the fishermen are going to react."