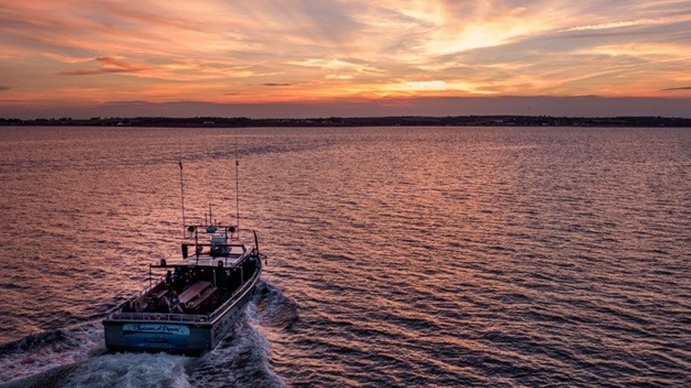 The boat named Chiasson A Dream is seen in this undated handout photo. A funeral home in Prince Edward Island is offering a unique new service, an opportunity to have your cremated remains scattered at sea. (THE CANADIAN PRESS/HO, Brennan Gaudet, Above All Ariel)

SOURIS, P.E.I. -- A funeral home in Prince Edward Island is offering a new service -- an opportunity to have cremated remains scattered at sea with accompanying fiddle music.

Nathaniel Lamoureux, the owner of Dingwell Funeral Home in Souris, said he got the idea while having dinner with a friend, overlooking the beauty of Souris Harbour at the east end of the Island.

"I thought living on Prince Edward Island, surrounded by the ocean, it would be a nice option to give families," Lamoureux said.

He has partnered with boat captain J.J. Chaisson, a well-known fiddler, to offer the "Dearly Departed" funeral service.

Lamoureux offers a number of burial options, ranging from a basic service where he and the captain release the ashes in a biodegradable urn, to a full service with family and friends onboard for the release, followed by a lobster dinner.

He said the service can be as elaborate or simple as the family wishes and can include fiddle music.

"We commit the cremated remains to the ocean," Lamoureux said. "The urn stays afloat for about 90 seconds then slowly sinks into the water. The family can distribute flowers on the water." A burial certificate is provided noting the longitude and latitude of where the remains were released.

He said while many people might have the idea to scatter ashes at sea, not everyone has access to a boat or is able to arrange a proper service.

Burial at sea falls under the disposal at sea regulations of the Canadian Environmental Protection Act. Lamoureux said both Environment Canada and Fisheries and Oceans Canada have given him approval.

He said the boat, called "Chaisson A Dream," is classified as a passenger ferry with Transport Canada and meets all the required safety requirements.

Brett Watson, president of the Funeral Service Association of Canada, said cremation is becoming a more popular choice. He said he still sees many traditional funerals, but more and more are becoming a celebration of life in which the body or cremated remains may not be present.

He recommends that families try to personalize the service as much as possible. "I've had services on farms, at racetracks, in fire halls, community centres, you name it," he said.

Watson said once a body has been cremated, the family can have the urn buried, but there are many options to scatter the ashes.

He said they can be scattered on private property, as long as you have the consent of the landowner.

"If it's a national park or provincial park, they typically will have specified areas where they will allow scattering. You have to get permission from Parks Canada or the provincial park," he said.

He does caution people to keep in mind that once the remains are scattered, there's no going back.

Lamoureux said he began advertising his burial at sea service last week and doesn't have any bookings yet, but he said he has received a lot of positive feedback through social media.