A tortoise that has lived in Nova Scotia museums since the 1940s is turning 100 this month.

The Nova Scotia Museum of Natural History is ringing in Gus the Gopher Tortoise’s birthday with three parties on Friday, Saturday and Sunday, at 11 a.m. and 2 p.m. each day.

“It’s a chance for people to come in and celebrate all things Gus,” said museum manager Jeff Gray.

The weekend celebrations will also include special turtle crafts, museum tours and birthday cupcakes in honour of Gus.

Gus was born and raised in Florida at the Ross Allen Reptile Institute in Silver Springs, Fla.

In 1942, Don Crowdis, the director of the Nova Scotia Provincial Museum, bought Gus for $5 and brought him back to Canada.

For many museum visitors, Gray says part of Gus’s appeal is his longevity. 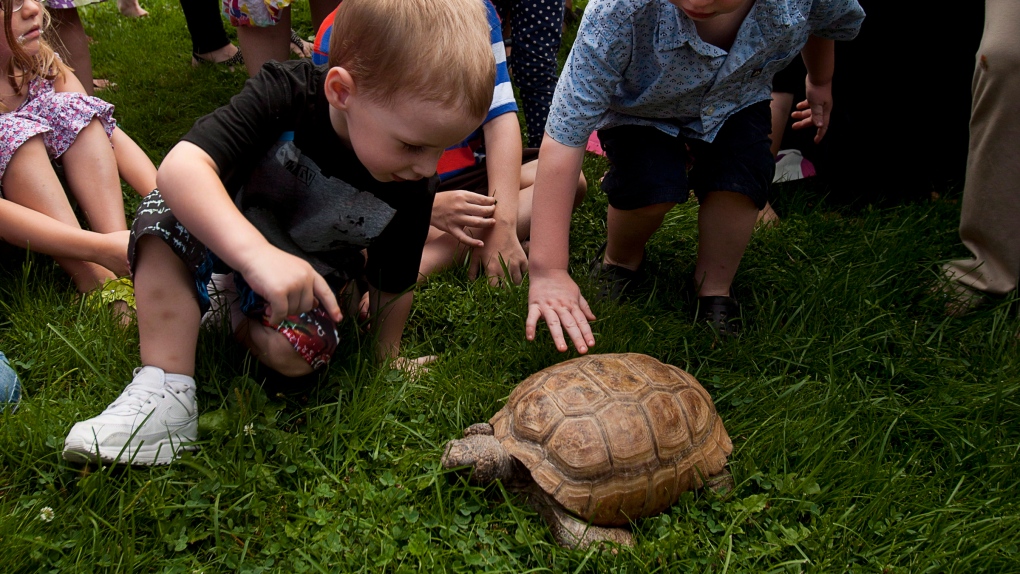 Gus, the resident gopher tortoise at the Museum of Natural History, walks on the lawn as he celebrates his 90th birthday at the museum in Halifax on Sunday, August 12, 2012. (THE CANADIAN PRESS/Andrew Vaughan)

“We have a lot of grandparents who come with their grandchildren, who will remember coming to see Gus when the museum was over on Spring Garden [Road],” said Gray.

After a century of life, Gus can be a bit of a curmudgeon, but Gray says he is still open to meeting new people.

“Being around new people never seemed to bother him,” he said.

In his more than 80 years at the museum, Gray says Gus has likely had millions of interactions with different people.

While the life expectancy of gopher tortoises in the wild ranges between 40 to 80 years, Gus being in captivity has likely contributed to his old age, said Gray.

“We never really know how long he will be with us, so we try and celebrate every day with Gus.”

Carrie Drake, naturalist interpreter at the Museum of Natural History, carries Gus, the resident gopher tortoise, as he celebrates his 90th birthday at the museum in Halifax on Sunday, August 12, 2012. (THE CANADIAN PRESS/Andrew Vaughan)

Some of his favourite foods are berries, lettuce and bananas, but when he’s strolling the museum grounds outside, dandelions and grass are on the menu.

In June, the museum opened a small exhibit so people can learn more about the time Gus has spent at the facility.

To learn more about Gus, or the Nova Scotia Museum of Natural History, you can visit its website.