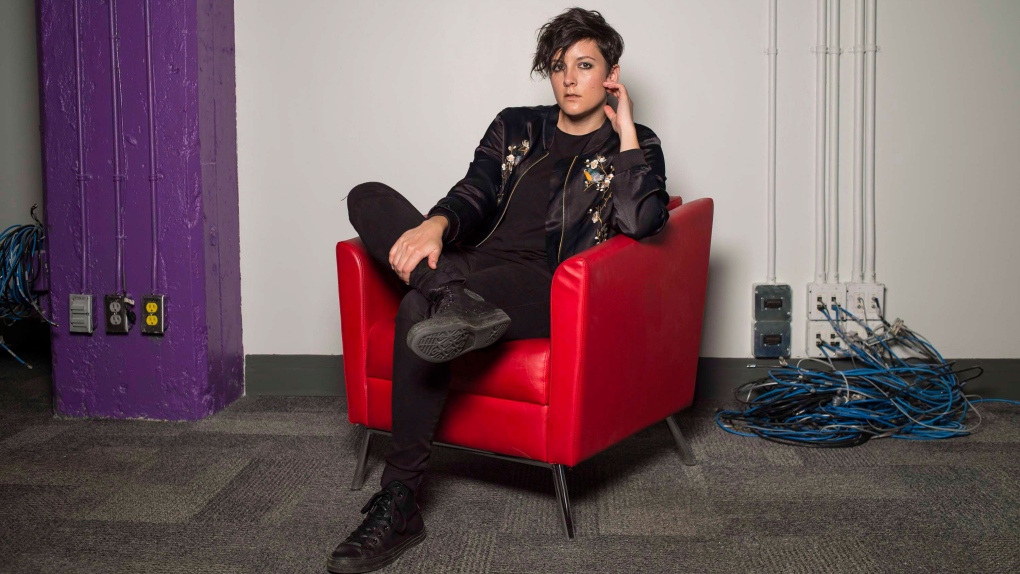 Singer Ria Mae talks about her upcoming album and the Juno-nominated single "Clothes Off," in Toronto on Monday, May 30, 2016. (THE CANADIAN PRESS/Eduardo Lima)

TORONTO -- Pop singer Ria Mae never considered herself an LGBTQ activist, but a recent music video shoot for the song "Gold" pushed the Halifax native to reflect on the boundaries of her own identity.

It began when a director pitched Mae the idea of playing a fictionalized version of herself caught in a passionate but troubled romance with another woman.

"I loved the story so much," Mae says. "The only thing I was worried about was the relationship."

She knew portraying a lesbian could potentially pigeonhole her music career, but Mae paused to question why she was so worried about putting her sexual orientation on the radar.

So Mae agreed to the storyline for "Gold," a rare example of a music video where a lesbian relationship doesn't exist solely for the titillation of straight men.

Getting the gay-positive video made was relatively easy, but the experience was an anomaly, even in today's music industry.

"Gold" director Alon Isocianu says this wasn't the first time he'd proposed a same-sex relationship for one of his videos, but it was the only instance that he felt practically no resistance.

"It's happened for years where I would pitch a video that had a same-sex couple and the record labels were like, 'We love all these scenes, but can you make that scene between the two high school kids a boy and a girl?"' he says.

Isocianu, who has worked with Kelly Clarkson and Pentatonix, thinks executives sometimes don't want to "open that can of worms" with an artist, or risk making a video where the song is overshadowed by the sexual orientation of its characters.

"It always blew my mind that would be an issue," he says.

"If I had a black character and somebody was like, 'Can we just make him white?' it would be a weird conversation to have."

In recent weeks, mainstream attention on LGBTQ issues has intensified, motivated partly by the Orlando gay nightclub shootings and June being Pride Month.

While music videos may seem like a minuscule concern in the bigger picture, they can play an important role for young LGBTQ people who -- like many minority groups -- are still searching for adequate representation in mainstream media.

"Pop music itself was, for many young people trapped at home in suburbia, all they had," says Mark Simpson, a British author and critic of pop culture trends, reflecting on the era when MTV and Much Music ruled the airwaves.

Rewind to the 1980s and most gay characters in music videos were either part of tragic stories, like Bronski Beat's "Smalltown Boy," or subjects of overt sexual repression like in the Pet Shop Boys' "Domino Dancing."

By the 1990s, some headway was being made as singers like k.d. lang and George Michael came out in their public lives.

Music videos took some time to catch up, however, and through the end of the decade representation stalled on novelty acts like Russian duo T.a.t.u., two sexually ambiguous women marketed as lesbians to attract controversy.

Today, the portrayal of LGBTQ themes in videos is becoming more mainstream.

Tegan and Sara are putting the finishing touches on a video starring transgender teens, while others like Sam Smith and Hozier have released clips where same-sex relationships play a key role in the narrative.

Australian singer Troye Sivan went a step further, starring in a trilogy of music videos as a teenager locked in a complex relationship with his best friend.

It's leaps ahead of even a few years ago, when hip-hop duo Macklemore and Ryan Lewis featured a lifelong relationship between two men in the "Same Love" video. When it was released in 2012 the concept was so unique it became enshrined as the unofficial anthem for the legalization of same-sex marriage in the United States.

But even with so much progress, at least one artist has found many battles left to fight.

Signed by Justin Bieber's manager Scooter Braun, and under a deal with Republic Records, the singer-songwriter was part of a marketing campaign that shrouded his identity in secrecy. His management believed Hagood would attract more listeners and radio programmers if his voice was the focus.

But in retrospect, the flamboyant performer says the reasons behind the approach were flawed.

"In the midst of being promised the world you're excited and you want to go for it," he says of going along with the strategy at the time.

Plans were unconventional for "Goodbye," his music video debut. Instead of showcasing the singer, three versions were filmed with actors portraying versions of his personality. A fourth version starring Hagood was never released, he says.

"I felt like you're hiding this guy," she remembers thinking, even as his song climbed the chart.

"What I loved about (Who is Fancy) was his appearance. He's this bubbly, happy person ... he has the confidence, he has everything, and they just -- I don't like what they did."

Hagood eventually stepped out of the industry closet and revealed his identity on Jimmy Fallon's show. "Goodbye" almost immediately lost steam on radio and dropped off the Billboard Hot 100 chart.

When "Boys Like You," his second single, fell short of expectations, Hagood parted ways with his management and label. He hopes to relaunch a career on his own terms this summer.

Looking back, Hagood doesn't lay the blame on his former team.

"It was everyone wanting to see me win, and they were like, 'Well, maybe you can't win if you're this (type of person),"' he says.

"But maybe I could, you know what I mean?"

Back in Canada, Mae has found reaction to "Gold" has been overwhelmingly positive, especially from older gay women who thanked her for representing their identity in a positive light.

She says it caused her to reflect on the power of her own voice.

"Some people don't want to be a statement, and I'm one of those people," Mae says.

"But sometimes just being yourself is a statement."