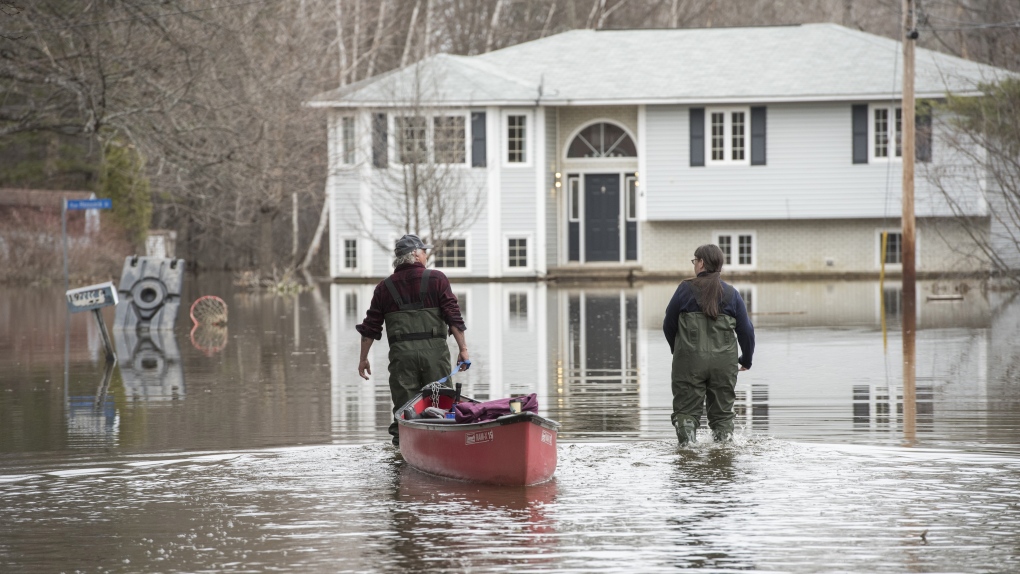 Keith McKay and Dee Branston use a canoe to carry food to a house on Jarvis Street in Fredericton, New Brunswick on Friday April 26, 2019. (THE CANADIAN PRESS/Stephen MacGillivray)

Health Canada is warning of the dangers of mould in homes and cottages hit by this year's spring flooding.

Federal biologist Francis Lavoie says it's important to dry wet walls and belongings within 48 hours, but that's not always possible in the case of flooding.

"You need to remove anything that has been too wet for too long that's not dryable," he said.

"Cushions, carpet, drywall, mattresses, box springs, stuffed toys, insulation material -- everything that has been exposed to water and cannot be dried -- needs to be thrown away or discarded."

He said plastic toys and some furniture can be cleaned up if it is just surface mould.

Lavoie said often by the time people can get back into their homes, mould is already growing.

"Mould is the most common indoor air contaminant in Canada."

He said people in homes with mould are more likely to have eye, nose and throat irritations, coughing, wheezing and shortness of breath.

Lavoie said it's important a cleanup be thorough, because water can seep under floors and into walls.

"We usually recommend using professionals for such extensive work. In the case of a flood, it's a lot of clean-up," he said.

For those doing their own clean-up, Health Canada does not recommend using bleach. Instead it says dish soap or spray soaps work just as well to clean up mould, and don't have the kind of strong vapours that can burn your eyes or irritate your throat.

"Wear rubber boots, gloves, eye protection and a face mask when cleaning and disinfecting. Always wash hands with soap and clean water after clean-up activities even if wearing gloves," she said.

Russell recommends having wells tested if they may have been impacted by floodwaters.

Lavoie said homeowners should not drop their guard even long after the clean-up has been done.

"Keep an eye on the rooms where there was mould. If you see that it is coming back, that may mean it wasn't cleaned up properly," he said.

Lavoie said many of the health symptoms related to mould are similar to those of allergies, so people can often ignore them if they believe they're just the result of pollen or other springtime allergens.

Information and other resources on indoor air quality and flood clean-up can be found on the Health Canada website.