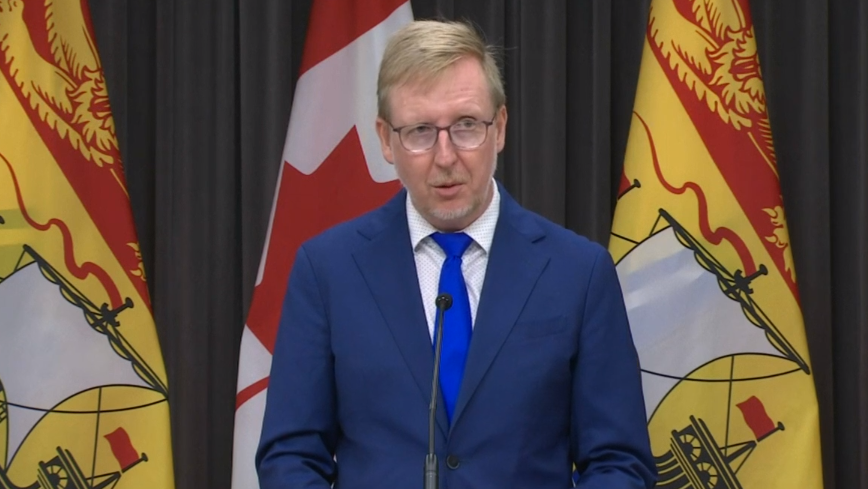 New Brunswick's education minister is lashing out at Air Canada, saying the airline is incompetent because it decided on the weekend to cancel a Monday flight that would have taken him and four officials to a meeting in Regina.

Dominic Cardy posted a series of tweets Saturday, saying the cancellation -- announced earlier that day -- means New Brunswick will not have representation at this year's meeting of the Council of Ministers of Education.

Cardy followed up by calling for deregulation of Canada's airline industry.

"I'm speaking for myself," he wrote. "I hope Canadians start asking why we pay more for flights than anyone in the world, in exchange for terrible service. Paying for unavailable services isn't left versus right. It's called being ripped off."

His comments sparked an online debate, with some people asking the minister why his delegation had to attend in-person rather than taking part in a Zoom call, which would save taxpayers money.

In response, Cardy said he doesn't run the council, and he doubled down by suggesting that "incompetent and coddled airlines" that take money for services they know they can't deliver could be committing fraud.

Air Canada could not be immediately reached for comment.

One online commenter suggested Cardy should try booking a flight on another airline.

"Checking for other tickets on other airlines had crossed my mind, but thanks for the pro tip," the minister tweeted.

The comment elicited this response: "Your sass is top notch!"

Air Canada announced last week it would cut more than 15 per cent of its schedule in July and August -- more than 9,500 flights -- due to an air transport system bogged down by surging demand.

Also last week, Calgary-based WestJet Airlines confirmed it is flying 32 per cent fewer flights in and out of Toronto Pearson International Airport in July than it did before the COVID-19 pandemic.

In recent weeks, the airline industry's logistical problems have led to the long lineups, snarled connections and cancelled flights at many Canadian airports.

As for Cardy's call for deregulation, one sarcastic observer suggested deregulating several other industries and public institutions, including "everything from soup to baby formula, health care ... and let's go back to the Middle Ages!"

Cardy's reply was blunt: "That all sounds exceedingly stupid. But you do you."

It's not the first time Cardy has taken aim at Canada's airlines. He called for deregulation On June 11, saying Atlantic Canadians pay rip-off fares for late and cancelled flights.

"Atlantic Canada has worst commercial airline service of any place I've lived, including Bangladesh and Nepal," he tweeted. "(The) Canadian government needs to deregulate the airline industry, like most countries did decades ago."

This report by The Canadian Press was first published July 3, 2022.

New Brunswick will not have representation at this year’s Council of Ministers of Education meeting in Regina, on Monday, because @AirCanada just cancelled the delegation’s tickets.

A new report says Canada needs to change its federal visa policy to speed up the admission of Ukrainian refugees, which has slowed to a trickle.

A group on Prince Edward Island is calling for a return to tougher COVID-19 restrictions in the province.

The last supermoon of the year, known as the 'sturgeon moon,' will rise in the evening sky tonight.

A four-year-old girl who went missing from her home Thursday morning was found wandering on train tracks near a Toronto subway station.

Police in Rio de Janeiro on Wednesday were seeking the arrest of six people accused of involvement in stealing 16 artworks together valued at more than 700 million reais (US$139 million), some of which were recovered.

Making baby food at home with store-bought produce isn't going to reduce the amount of toxic heavy metals in the food your baby eats, according to a new report released exclusively to CNN.