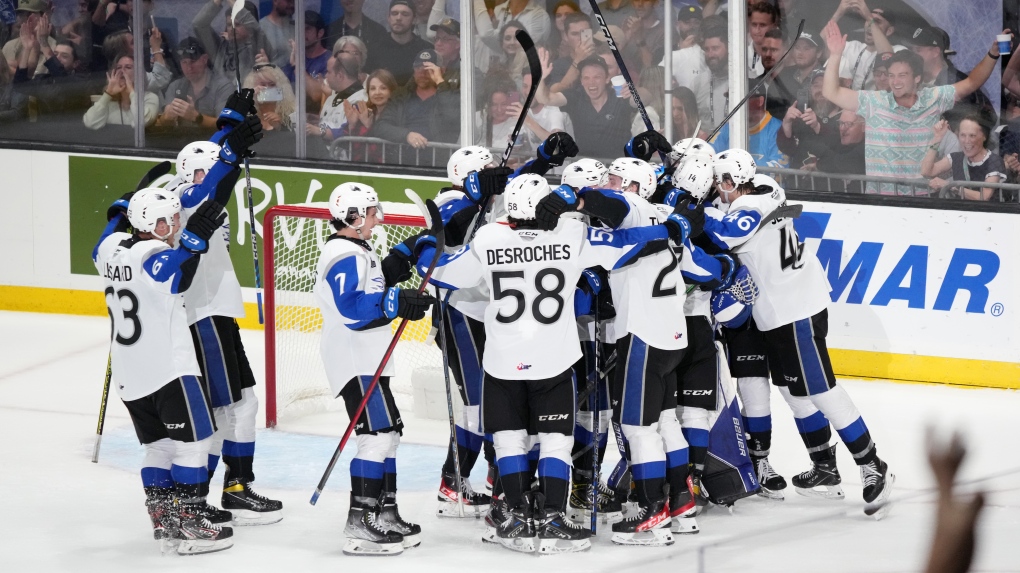 Two teams that skated through distinctly different paths in the playoffs will meet Wednesday in the final of the 2022 Memorial Cup.

The host Saint John Sea Dogs, who went 39 days between games after losing in the first round of the Quebec Major Junior Hockey League playoffs, will face the Hamilton Bulldogs, who posted a 16-3 post-season record en route to the Ontario Hockey League championship.

It is the first Memorial Cup final since 2019, when the Rouyn-Noranda Huskies skated to the title at the tournament in Halifax. The 2020 and 2021 Memorial Cup events were wiped out because of the COVID-19 pandemic.

The Sea Dogs earned a direct berth into the final after posting two wins and an overtime loss in preliminary-round action, while Hamilton required a 4-2 regulation win over the Edmonton Oil Kings to escape the preliminary round and then eked out a thrilling 4-3 overtime triumph over the Shawinigan Cataractes in Monday's semifinal to advance.

"We are hanging around. One month ago, who knows what people were saying about us," said Saint John head coach Gardiner MacDougall, who replaced Gordie Dwyer on May 22 after the Sea Dogs were upset by the Rimouski Oceanic to open the playoffs.

"They didn't know if we would be a good representative of the tournament, maybe we would have only three games -- that is all we were guaranteed. It is nice to still be here."

Hamilton survived a seven-game series against the Windsor Spitfires to win the OHL crown and then dropped consecutive games to Saint John and Shawinigan to open the Memorial Cup.

That set the stage for a do-or-die preliminary contest against Edmonton on Friday, where Anaheim prospect Mason McTavish scored two goals for Hamilton in the key victory.

"The players have found ways," said Hamilton coach Jay McKee. "It is a confident group that believes in each another and that is a real powerful element to have."

Saint John and Hamilton met in the tournament opener June 20, when the Sea Dogs raced to a 4-1 second-period lead and held on for a 5-3 victory.

"The players have earned a great opportunity," said McKee. "We played Saint John once and they certainly didn't see the best version of the Hamilton Bulldogs and I expect they will (Wednesday) night."

The Sea Dogs later fell 4-3 in overtime to Edmonton. Then, led by QMJHL most valuable player William Dufour, they rallied from a 3-0 first-period deficit on Saturday to down Shawinigan 5-3 and take top spot in the preliminary round.

"They have had a really good mindset and they have been receptive to everything," MacDougall said of the Sea Dogs, who finished the regular season on a 15-game winning streak.

Hamilton went 51-12-3-2 in the regular season, led by Logan Morrison's 100-point campaign and 66 points from OHL defenceman of the year Staios.

Dufour, a New York Islanders prospect who leads the tournament with six goals, was named the QMJHLMVP after his 116-point season that included a Canadian Hockey League-best 56 goals.

Linemate Josh Lawrence finished the year with 101 points, tying for the league in assists with 70, which also set a franchise record.

This is Saint John's fourth Memorial Cup appearance as the franchise looks to add to its 2011 championship in Mississauga.

Hamilton is making its second tournament appearance after losing in the 2018 semifinal to the host Regina Pats.

Meanwhile, it was a big night for Dallas Stars prospects at the Canadian Hockey League awards Tuesday.

Logan Stankoven of the Kamloops Blazers, who recorded 104 points in 59 regular-season games, was named the David Branch CHL player of the year.

Stankoven, a five-foot-10 centre who was selected by the Stars in the second round of the 2021 NHL draft, recorded three or more points in 18 games during the regular season, including a pair of five-point games on Nov. 3 and Jan. 29.

Wyatt Johnston, Dallas' first pick, 23rd overall in 2021, was the CHL's top scorer with 124 points in 68 games for the Windsor Spitfires.

Shane Wright of the Kingston Frontenacs took home the top draft prospect award while Bradyen Yager of the Moose Jaw Warriors was named rookie of the year.

Jim Hulton of the Charlottetown Islanders claimed the coach of the year award after leading his team to its first President Cup appearance in franchise history.

Owen Beck of the Mississauga Steelheads was named scholastic player of the year and Luke Prokop of the Edmonton Oil Kings was named humanitarian of the year.

This report by The Canadian Press was first published June 28, 2022.

This is a corrected story. A previous version had the wrong years that the Memorial Cup was cancelled due to COVID-19.

A widespread power outage is currently affecting the downtown core in Toronto and officials say it may have been caused by a large crane that struck a high-voltage transmission line.

A national tracking system for health-care workers, with information on what training they have, where they're located and what their career plans are, would make a 'significant difference' in addressing future staffing challenges, the president of the Canadian Medical Association says.

A Brampton, Ont. media personality who was attacked with a machete and axe in his driveway will need months of physical rehabilitation to recover, a close friend says.

A new report says Canada needs to change its federal visa policy to speed up the admission of Ukrainian refugees, which has slowed to a trickle.

The last supermoon of the year, known as the 'sturgeon moon,' will rise in the evening sky tonight.

A four-year-old girl who went missing from her home Thursday morning was found wandering on train tracks near a Toronto subway station.

A group on Prince Edward Island is calling for a return to tougher COVID-19 restrictions in the province.