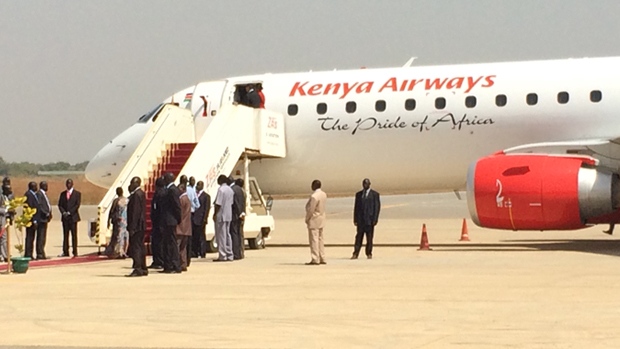 The beat of the African drum is keeping time. Young girls are performing a traditional South Sudanese dance. The streets leading to Juba International Airport are lined with onlookers. I’m told they are regular citizens who have come to welcome the president.

President Salva Kiir is arriving home from peace talks in Arusha, Tanzania, where the three factions of the Sudan People’s Liberation Movement (SPLM) have agreed to reunify as one party.

When civil war erupted in South Sudan in December 2013 the party divided; the ruling government led by Kiir, the Opposition led by his former vice-president and the detainees.

Today the president arrived on a chartered Kenya Airways flight. Surrounded by an entourage of other officials and military personnel, he walked the red carpet. He did not speak with the throng of waiting local and international journalists.  I was not permitted to photograph him despite carrying two photo IDs, declaring me an international and local journalist, since I am working with a local crew. I could get no explanation for this, but it seemed to be that my camera was not big enough!

The SPLM party spokesperson told reporters, “This agreement is a watershed in the history of the people of South Sudan. It is a cornerstone in our search for peace."He admitted it is not a final peace agreement but declared 2015 the year of peace and reconciliation in South Sudan.

The reporter I was working with wanted to know how the party would share power now that they have reunified. The spokesperson refused to answer.

Some tell me the deal is a good start, an important step. Others say it means nothing. Peace deals have been signed before, but none has ended the war.

Still, the dancers danced to the beat of the drum. The crowd, now much larger, waved tiny paper South Sudanese flags. Their pride evident, their hope undeniable. I hope it means something.