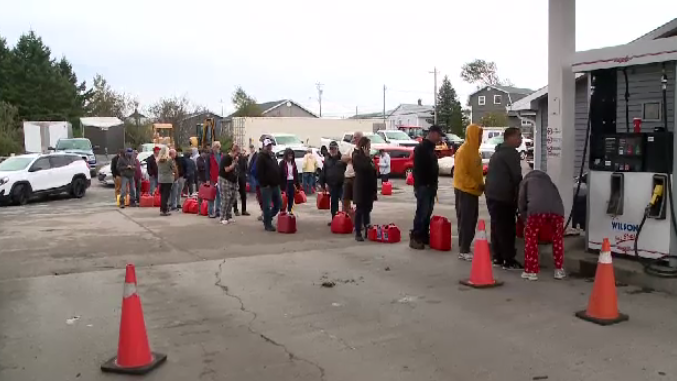 Long lines continue to be a common sight around the few open gas stations on Cape Breton Island, as residents and business their third day without power.

Mi'kmaq Gas and Convenience, on Membertou First Nation, is one of the only gas stations in the Sydney area that has power and gasoline. Lines of vehicles snake for kilometres in multiple directions, as residents look to get gas to fuel their generators and vehicles.

In Baddeck, N.S., customers from across the island made the trip for fuel.

Nona and Blair Forrest drove from Sydney Mines. The couple waited in a long line to fuel up to support their generator so the food in their freezer doesn’t spoil.

"We have no power," Nona said. "Both gas stations are shut down."

Others say it's either make the drive, or wait in a longer line on Membertou First Nation.

"You can get it in Membertou, but the lineup is even worse in Membertou," said Chad Devoe of North Sydney, N.S.

The Irving gas station along the TransCanada highway near Baddeck, N.S., opened at noon Monday however, only cash payments are being accepted.

Restoration times across the area appear to be mid-week at the earliest.

Bob McGrath, an actor, musician and children's author widely known for his portrayal of one of the first regular characters on the children's show 'Sesame Street' has died at the age of 90.

Former U.S. President Donald Trump faced rebuke Sunday from officials in both parties after calling for the “termination” of parts of the U.S. Constitution over his lie that the 2020 election was stolen.