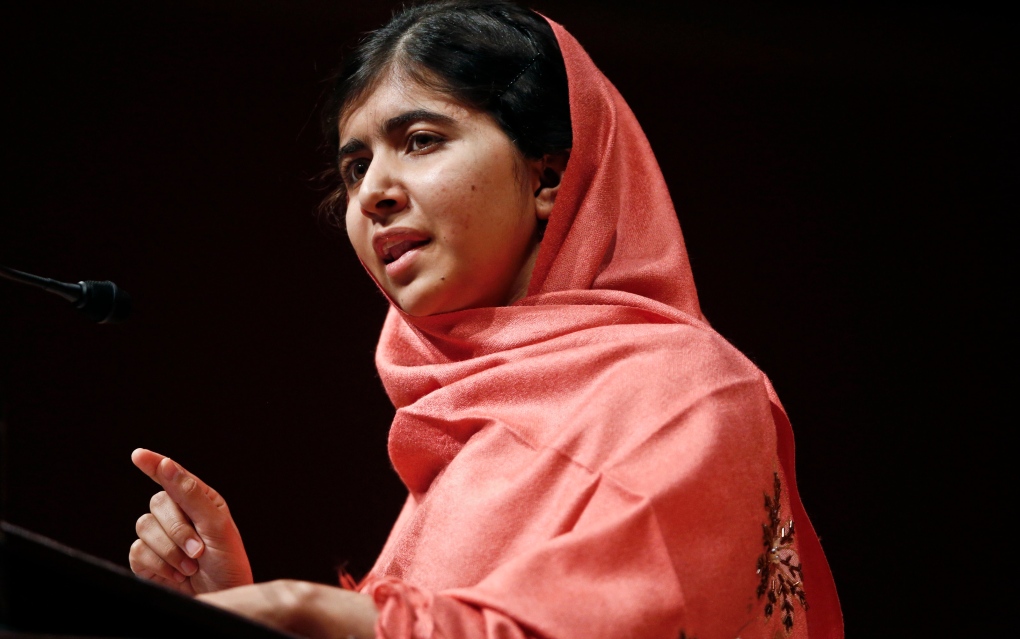 OTTAWA -- Graduating students at the University of King's College in Halifax got a surprise virtual visitor Thursday -- Malala Yousafzai, the Pakistani teen and champion of girls' education who survived a point-blank shooting by the Taliban.

Via pre-recorded video from Britain, Yousafzai appeared during Thursday's convocation ceremony to receive an honorary doctorate and announce a new $240,000 scholarship in her name that will allow two female students from developing countries to study at the Nova Scotia institution.

The university is partnering with Canada's International Development Research Centre (IDRC) to fully fund four years of study for two young women to the tune of $30,000 per year for each recipient.

Yousafzai, 16, never directly mentioned the hundreds of teenage girls kidnapped from their school in Nigeria by the terrorist group known as Boko Haram. But her appearance marked one more poignant act of defiance against the efforts of those around the world who seek to deny young girls an education.

"It's not only a degree, but it's courage, and it's your support and it's strengthening me to continue my campaign for education of every child," she said in the video.

Yousafzai received an honorary doctorate of civil law from the university, along with three other honorary degree recipients, including Governor General David Johnston.

In his convocation address, Johnston called the scholarship a wonderful way for Canada to honour Yousafzai's message of giving young women access to a quality education.

Yousafzai said she was sorry she couldn't be with her "fellow graduates," but added she hoped to visit one day.

The citation for her degree offered a simple reason for her absence: she is in the middle of her high school exams in England.

Yousafzai told those gathered in the video message that she was happy and excited that the scholarships would provide an opportunity to young girls dreaming "for a better future, for a better world," to get a quality education.

"I think that there are so many children in countries like Pakistan who are talented, who have skills, who have dreams. But because of poverty, because of many other issues, because of terrorism, they cannot go forward in their life."

Yousafzai lives with her family in Birmingham, England, and is pursuing her own studies towards one day becoming a lawyer.

"I'm already a doctor, but still I'll work hard and it's also my dream to study law and get more and more education, and I'm very thankful to all of you."

Yousafzai became an international symbol of girls' rights after the Taliban shot her in the head while she was coming home from school in her native Pakistan in October 2012.

"I can't imagine anybody in the world today who is better able to signal the profoundly important goal of scholarship for people from emerging countries, from developing countries, particularly young women," university president George Cooper said in an interview.

"For Malala to be able to lend her name, first of all to this scholarship, and secondly to her work in Pakistan, and also now in Nigeria is wonderful and courageous and a signal by Malala."

Muslim leaders from across the globe have condemned the Nigerian student kidnappings by Boko Haram, which translates in English as "western education is sinful."

Jean Lebel, the IDRC president, said the Canadian Crown corporation supported the scholarship because it meets a key tenet of international development: educating girls and women.

"It fits globally with some of the work the centre is doing on governance, security, justice and support to the youth for education."