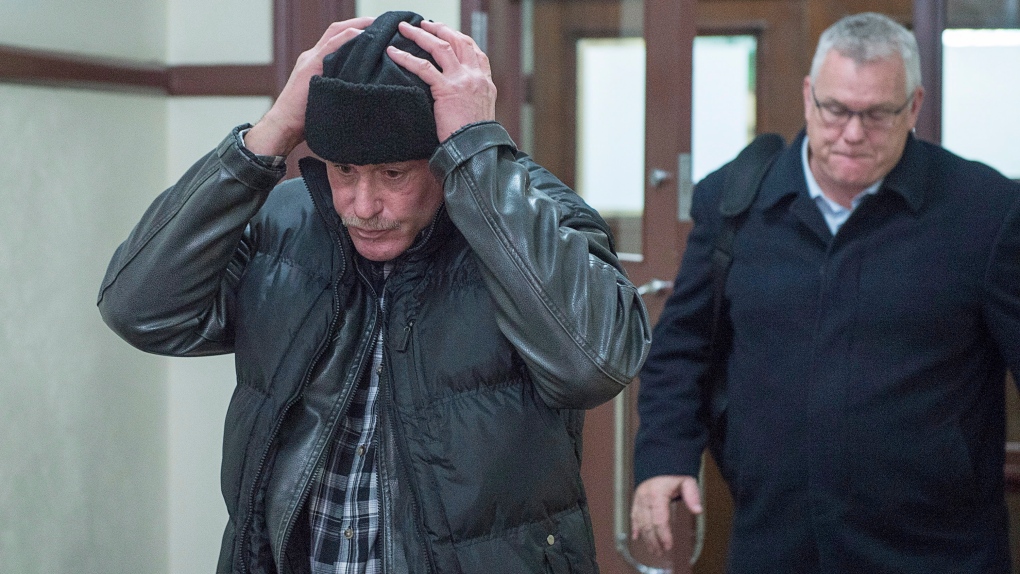 Joseph (Patrice) Simard, left, adjusts his hat as he heads from provincial court in Halifax on Wednesday, Dec. 5, 2018. Const. Laurence Gary Basso faces charges of assault and falsifying information in police reports relating to the alleged assault of Simard at a homeless shelter. (THE CANADIAN PRESS/Andrew Vaughan)

HALIFAX -- A man wept in court Wednesday after watching a video that showed a police officer apparently striking him in the face outside a Halifax homeless shelter.

Joseph (Patrice) Simard was testifying at the trial of Const. Laurence Gary Basso on charges of assault and falsifying information in Halifax police reports.

Throughout his day-long testimony in provincial court, Simard repeatedly said he had almost no memory of what had happened from the time of the incident until after waking up the next day in a police lockup.

The video from the shelter security camera shows an officer pulling up in a cruiser, and approaching the homeless man as he sits on a milk crate outside the Metro Turning Point shelter on the night of Feb. 25.

Simard, 55, had been asked to leave the shelter because he was drinking alcohol in his bed.

After a conversation, the officer puts on a pair of gloves and appears to take hold of Simard's backpack and move it. He appears to grab Simard's shoulder.

In the video, Simard is on his knees as the officer swings his arm and appears to strike Simard in the face. Simard then drops heavily to the ground.

As he watched the video for the first time in a darkened court, Simard drew a sharp breath as the officer took his swing.

The Serious Incident Response Team, an independent police watchdog agency, has alleged Basso broke Simard's nose as he arrested him.

Defence lawyer James Giacomantonio has told court there is evidence from the video that Simard tried to strike Basso first. The video does show Simard's arm extended for an instant while he was on his knees.

Simard testified he was afraid of leaving the shelter because he was worried about not being safe in the cold weather. He said he asked Basso to take him to the "drunk tank" for the night.

"I was intoxicated, and it was unsafe for me to go somewhere; that neighbourhood is rough ... If you fall asleep somewhere it's dangerous," he told the court.

He told prosecutor Sylvia Domaradzki he can remember little beyond the officer telling him the police station is "not a hotel." He also recalled lying on the ground and being handcuffed.

He testified he had a "blackout" and the next thing he remembered was being at the police station the next day with an aching head.

He didn't return immediately to the shelter, and instead went into a wooded area and built a shelter where he stayed for four days before returning to the Metro Turning Point to collect items he had in a locker there.

From there, he went to a hospital, as he was continuing to experience pain in his head, and tests determined he had a broken nose, he said.

In cross-examination, Giacomantonio asked Simard about another video showing Simard at the police station, with Basso, two other officers and a paramedic standing near him.

The defence lawyer asked Simard why he said to Basso, "I'm so sorry about that," and put to him it was because he was apologizing for hitting Basso in the leg.

The lawyer also showed video of Simard in a conversation with a French-speaking Halifax police officer the next day, and court heard testimony that Simard asked the officer to pass on his apologies to Basso.

Simard said repeatedly -- through a French translator -- he couldn't recall the conversations, as he was emerging from an alcoholic blackout.

However, he said he believes that he only said he was sorry because he was attempting to be co-operative with police.

Simard said from what he could see of the video, the officer had taken his backpack and he wanted it back.

"From what I saw on the video he shook my backpack in front of me and I only wanted to grab my backpack and have my things back because they're important to me," he said, speaking through a French translator.

"On my knees, hitting a police officer, that doesn't make any sense," he added.