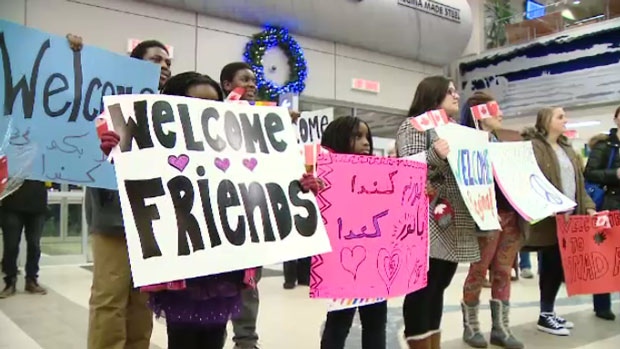 Moncton residents come together to welcome a Syrian refugee family.

HALIFAX -- More people are immigrating to Atlantic Canada than ever before, but many do not stay, a new report says.

The Atlantic Provinces Economic Council report released Thursday said a record 8,300 immigrants arrived in 2015, and yet more the following year.

The Halifax-based council said 11,600 immigrants came to Atlantic Canada in the first nine months of 2016, due in part to an influx of Syrian refugees.

"The total numbers have tripled since 2002," David Chaundy, author of the report, said in a phone interview Thursday.

Chaundy, the council's research director, attributes the increase to expanded use of provincial nominee programs, which allow provinces to nominate people who wish to immigrate to their region, up to a cap.

"That's what has really driven the growth," said Chaundy, adding that this year the region could see closer to 19,000 immigrants, due in part to a new three-year Atlantic immigration pilot project announced by Ottawa and the four provinces last year.

But Chaundy said retention rates for Atlantic Canada are low, and lengthy processing times are a barrier for greater use of immigration in the business community.

"The challenge is on the retention of these immigrants," said Chaundy. "Although our immigration numbers are rising, we're still losing close to half of them over a five-year period."

"These can be a challenge for employers looking to bring in a worker fairly quickly," said Chaundy. "We really need to make sure we have resources to process these applications in a timely manner."

About 80 per cent of immigrants settle in the region's major urban centres.

The report is based on information from Statistics Canada and Immigration, Refugees and Citizenship Canada.

Nova Scotia Premier Stephen McNeil said his government has made growing the population a major priority since being elected in 2013.

He said with an aging population, it's important to create economic opportunities for immigrants and for young people in order to expand the tax base and sustain vital services such as health care.

"I think it's one of the single biggest issues as a region that we have to do is around repatriating our own sons and daughters ... and bringing in new citizens. We have a real demographic challenge and we need to change that," said McNeil after a cabinet meeting Thursday.

McNeil said Nova Scotia has hit its provincial nominee cap in the past two years.

McNeil said more can be done to help foreign university students stay and work in the region.

"We are continuing to look at ... ways we can continue to attract them and keep them here. I think part of it is once they get the job they want to stay."