New Brunswick EMO says the worst of the flooding in the province may be over.

Officials say water levels increased about 10 centimetres overnight Saturday. Five communities from Fredericton to Sheffield are all above the flood stage.

Water is covering parts of the road (105) where it wasn't yesterday. @CTVAtlantic pic.twitter.com/X3WiItCNkw

New Brunswick EMO is predicting those levels to stay where they are for the next couple days.

“We're not expecting a huge increase from now on, but more to stay steady for the rest of the week for sure,” said Robert Duguay of New Brunswick EMO.

Diana Donovan has a set of stairs in front of her home, so she can walk down and enjoy sitting by the river. But on Sunday, the stairs were swallowed by the river.

“It's mother nature doing its finest,” said resident Diana Donovan. “We choose to live on this side of the river, and we know every year that the water's going to come up. And it's just water, you deal with it and you prepare early.”

Residents are seeing water in their basements, but say so far it's a pretty normal spring flood. They are prepared if it gets any worse.

“Raise everything up high and move what I can to other locations,” said resident Mark Robinson. “I have another property in Burton and we make arrangements to move our animals and I can stay there.”

Known as the "Trews" this spot is actually moving the truck as we go though. @CTVAtlantic pic.twitter.com/TYX0CYcacO

In Sussex, emergency operations were opened up and issued several warnings to residents through emails, phone calls, and going door-to-door in high-risk areas. Workers urged people to move belongings out of their basements and have medications and other essentials ready in case of an evacuation.

“It's always a little scary to wake out of a dead sleep and get that call. But it was a good call, and I think that's something that was learned from the last flood,” said Bruce Northrup, MLA of Sussex-Fundy-St. Martins.

Sussex EOC uses this modified telephone pole to monitor water levels. It sends an alarm to first responders when a flood is imminent. pic.twitter.com/z26qnMoWO9

Within a few hours, the waters had crested and crews were told to stand down. But emergency co-ordinators are still urging caution around rapid, murky waters, and potentially unstable banks.

“It's still holding at about the same, but the rain has stopped and it takes about an hour, an hour and a half for the headwater to flush through Sussex. Once that goes through, then the river will drop,” Rick Horton, Sussex EMO co-ordinator.

Flooding basements and high water in Sussex. An emergency alert issued this morning has been lifted, but responders are still on high alert pic.twitter.com/Q9WpT7NVXY

Many in the province are thinking of the flood victims in Quebec and Ontario, including Fredericton's MP Matt Decourecy, who was taking a look for any damage at home.

“There are a lot people who will undergo hardship in those areas of the country,” said Decourecy. “But here in our region we also know that there's some anxiety and concern, but by and large people are in good spirits.”

Officials are going to keep the road closed until water recedes. Residents with specials passes are allowed through, but for now, only in half-ton trucks or larger.

Each vehicle is being checked to make sure they're residents of the community before getting through. @CTVAtlantic pic.twitter.com/bgaiCXZQfg

Only residents allowed to get through this...if they so choose. @CTVAtlantic pic.twitter.com/q0NLg6gzKX

But for riverside residents who tend to keep reminders of what the floods of 2008 and 1973 were like, many of them are thankful.

With files from CTV Atlantic’s Laura Brown and Cami Kepke. 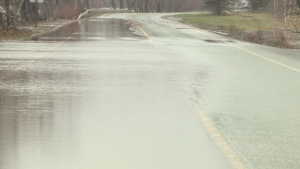