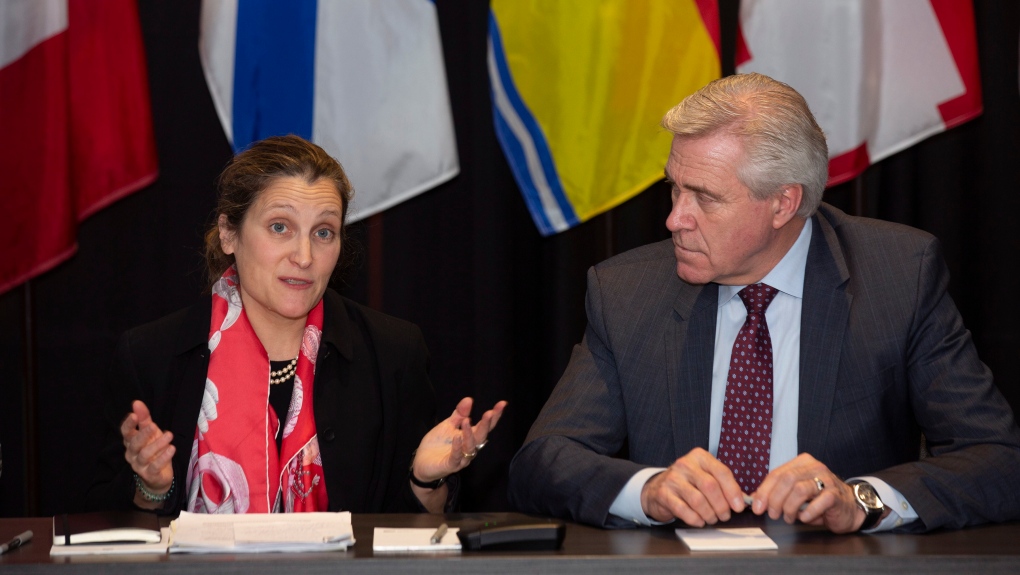 Costs have shot up to $12.7 billion since the project was sanctioned, and its current financing structure would force electricity ratepayers to make up the added cost in their monthly bills.

"It was never meant to be the burden on the province that it is," Premier Dwight Ball said Monday afternoon. "I think all my federal colleagues understand that, and that was certainly the priority number one for us."

Freeland was joined by federal Natural Resources Minister Seamus O'Regan for the meeting in Ball's office in St. John's, N.L.

Ball's Liberal government has asked Ottawa for assistance of at least $200 million per year to offset Muskrat Falls' impact on ratepayers.

The premier said he's aiming for a federal-provincial agreement on the mitigation issue by the end of the month.

He said the topic was also raised Monday in a meeting with the Atlantic premiers.

"There's not a premier in this country that's not aware of the electricity rate problem we're facing here," he said.

He said he and the federal ministers also discussed flexibility around federal infrastructure funding, a national pharmacare program and fiscal stabilization on Tuesday.

Before her meeting with Ball Tuesday morning, Freeland praised Atlantic Canada's premiers for putting aside partisan differences and working together on common goals for the region.

Freeland said the co-operation among the premiers -- two Liberals and two Progressive Conservatives -- is an example for Canada.

"The rest of us can learn a lot from you guys," she said.

Freeland said she planned to discuss interprovincial trade and NAFTA with Ball.

On Monday, the premiers had said they planned to raise the issues of fiscal stabilization and health care for the region's aging population when meeting with Freeland.

This report by The Canadian Press was first published Jan. 14, 2020.