HALIFAX -- As Nova Scotia identifies two new cases of COVID-19, it is also expanding the list of symptoms for which it is testing.

Chief Medical Officer of Health Dr. Robert Strang said the expansion is based on growing knowledge of the virus and all provinces and territories are adopting the expanded list of symptoms.

“We’ve learned over the last few months that COVID-19 actually can present in a more diverse way, a greater number of symptoms than we originally understood at the beginning of the first wave,” Strang explained during a news conference in Halifax Friday afternoon.

Anyone who experiences any one of the following symptoms is encouraged to take an online test to determine if they should call 811 for further assessment:

Strang said he realizes many of the symptoms are common, but it’s important to have a low threshold for testing, and to test large numbers of people.

“Many of these are very common symptoms and just because you have one of those, I don’t want to create undue stress,” said Strang. “In all likelihood if you have these symptoms, it’s not because of COVID, but it’s very important that we test you to rule out COVID.”

He said 811 and COVID-19 testing centres are prepared for an increase in calls and testing.

2 new cases of COVID-19 at Northwood

The province also announced two new cases of COVID-19 on Friday, both of which are connected to the Northwood long-term care facility in Halifax.

Strang said one case involves a Northwood resident and the other involves an employee.

“We continue to have no cases now for the last few days … that are outside of Northwood, which is continuing good news,” said Strang.

“As you can see overall, our epidemiology is headed in the right direction. The number of new cases continues to remain low and the vast majority of those are related to the Northwood outbreak, so that’s very pleasing to see.”

To date, there have been 58 deaths in the province and 52 of those deaths have been at Northwood, which has seen the most significant outbreak of the virus. Three residents died at the facility this week.

Northwood currently has 16 residents and four employees with active cases of COVID-19 and another facility has one resident with an active case of the virus.

Eight people are currently in hospital and four of those patients are in intensive care units.

The two new cases were confirmed in the Nova Scotia Health Authority’s central zone, which contains the Halifax Regional Municipality.

The western, northern and eastern zones are reporting no new cases at this time. 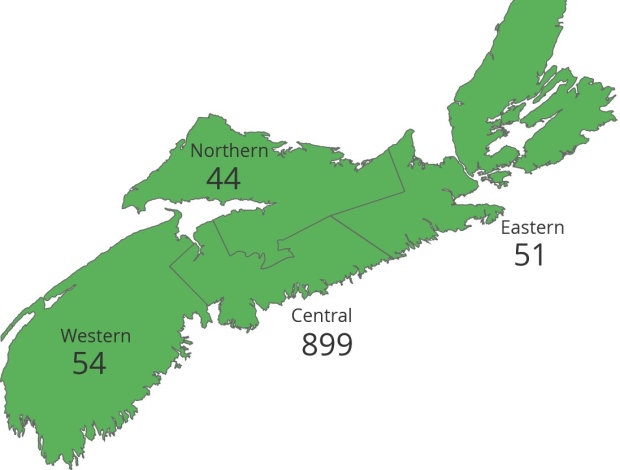 Strang reiterated Friday that, while the first wave is coming to an end, Nova Scotians will need to adjust to a “new normal” while living with the reality of COVID-19.

“As we come out of the first wave of COVID-19, it’s not about going back to where we were in 2019,” he said. “Some things need to be maintained that allow us to live with COVID in a reasonable way.”

Strang said Nova Scotia will likely see a second wave of the virus in the fall or winter.

“Nobody can be definitive about that. Even any of the reasonable experts would say we’re likely to see a second wave, but not exactly sure when and not exactly sure how severe it would be,” he said.

Clarification on the use of gloves

Strang said he is often questioned about whether or not people should wear gloves and says he is “strongly discouraging” their use.

He said wearing gloves tends to give people a false sense of security and they are less likely to wash their hands, which is the best way to keep hands clean.

“The virus gets on gloves just like it gets onto your hands, but because you’re wearing gloves, people are much less likely to actually do the appropriate and thorough washing,” he said. “It’s important that people rely on good frequent hand-washing as the way to keep their hands clean, not on wearing gloves.”

Strang also stressed the importance of continuing to practise the measures aimed at preventing the spread of COVID-19, such as maintaining a distance of six feet from those who are not in your household “bubble” and limiting planned social gatherings to no more than five people.